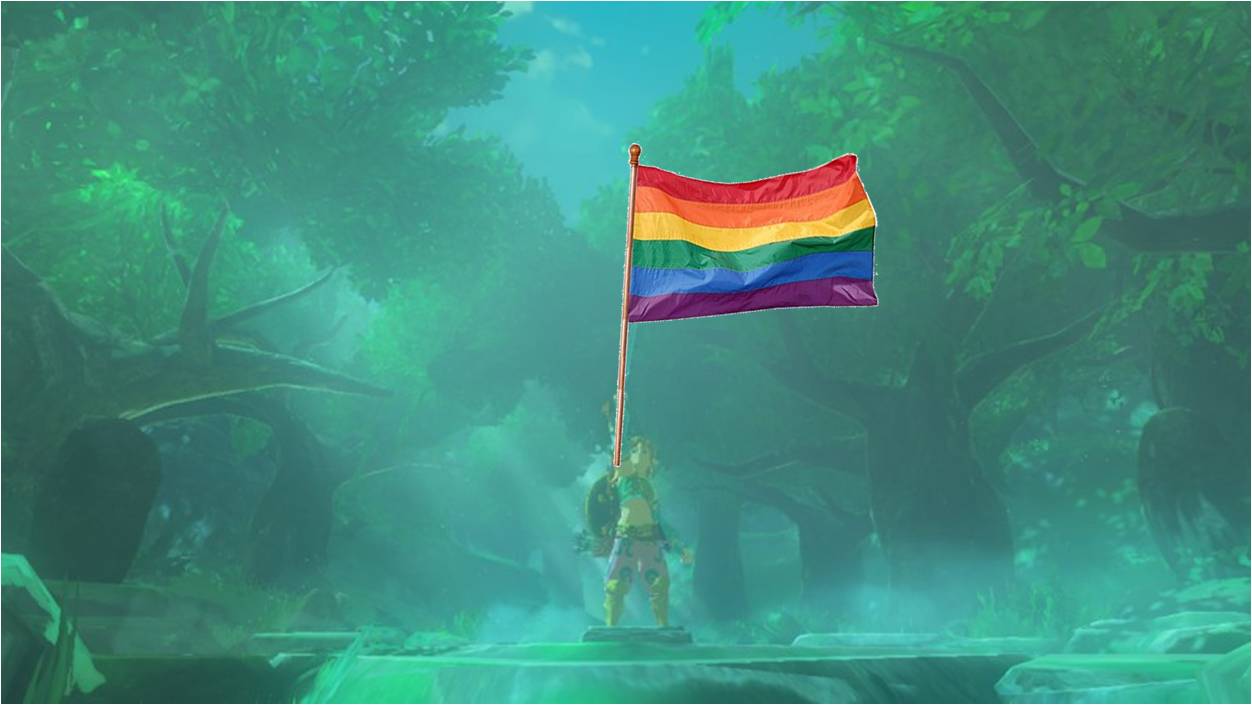 [Have you ever played a game and thought to yourself, “Man, this is a fantastic allegory for budding sexuality and what it means to be true to yourself?” Me neither, but that’s why we have fantastic blogs from Adzuken, who gives us scrumptious food for thought on how Ocarina of Time could be more than just another adventure for The Hero of Time. Get your work on Destructoid’s Front Page by rockin’ the suburbs in our Community Blogs! – Wes]

In The Legend of Zelda: Ocarina of Time, puberty hits Link in much the same way it hits many of us fleshy humans: suddenly, at an inopportune time, and with the force of a freight train. He pulls the Master Sword, and the next thing he knows it’s seven years later, he’s swimming in hormones, covered in hair, and alone with a strange old man… and someone must have changed his clothes while he slept. That sucks, guy, but look on the bright side, at least you don’t have to deal with menstrual cycles.

That’s not the last curveball that Hyrule has to throw at him, either. Throughout his quest to save the world, he’s surrounded by the ladies – his childhood friend, a woman from a tribe exclusive to women, fairies who thrust their angular cleavage at him whenever he beckons, and even a fish princess. A fish princess! Yet, despite this, he keeps it in his pants like a champ.

Maybe it’s because Link is just too focused on his quest, or maybe he’s a gentleman and doesn’t treat every woman he bumps into as a potential conquest. That’s cute, but we’re talking about a teenager who has just discovered his body. His magical coma has deprived him of the humbling, awkward phase of his adolescence, so concepts like respect and self-control are foreign to him. The only thing he knows is he’s got pork steak to peddle and the meat market is open for business.

Instead, for a large portion of the game, Link’s attention is held by another mysterious stranger: Sheik. While Link rarely seems too broken up when his lady friends become forcibly martyrized into an eternity as a magical conduit, he finds himself constantly searching the lingering smoke after Sheik pulls a disappearing act. The most intimate moments that Link spends with another character throughout the course of his adventure are with this stranger.

Now, remember that as far as Link knows, for most of the game, Sheik is a man.

WHAT ARE THESE FEELINGS?

It isn’t until near the end of the adventure that he learns, spoiler alert, Sheik was Princess Zelda in drag all along. Well, that explains why Link’s heart went aflutter every time his best bro plucked his harp. Now that all the confusion is cleared up, Link can get back to all that manly heterosexual stuff he likes to do, like fishing and drinking milk.

The closest Link ever gets to romance in Ocarina of Time is during one of the end cutscenes where he shares a tender moment with Zelda before she sends him screaming back to his childhood with only the vicious sting of rejection to show for it. That at least proves that Link is straight, right?

When you’re a hormone-filled teen, homosexuality can be a pretty confusing situation. Despite where your body’s sexual compass is pointing, you’re pressured from all sides to conform to heteronormativity. Your parents often impress upon you that your goal in life should be to meet a nice member of the opposite sex to start a family with, your peers often ridicule those with tastes that don’t conform with the norms, and it can be difficult to find others who will openly admit to having alternative preferences. How many young people do you think find themselves in heterosexual relationships despite their raging gayness? Anecdotally, it seems like a lot. Some people figure this out quickly and get with the gay, others find themselves spending a lifetime trying to force a square peg into a circular hole.

THE HERO OF HORMONES

Feelings that you’ve built up for a person can’t easily be switched off. Link’s discovery of Sheik’s true gender would probably not have initially changed much, aside from what he sees between the legs of the person he fantasizes about. If anything, it would have left him relieved that he didn’t need to address the issue of his sexual identity. He could sweep Zelda off her feet, carry her into the sunset, and start their “happily ever after”. As far as he’d have known, that’s the way it’s supposed to be.

As anyone who has played through the game knows, that’s not how it went. Instead, he was returned to his own time period to live out puberty in the emotionally traumatizing way that nature intended. Perhaps this way, he would have the chance to discover his sexuality, instead of finding himself in an unfulfilling marriage and the yawning emptiness within. He’d just be going through the paces, maybe even having a few children, all the while wondering what Ganon’s up to.

Do I honestly think that Nintendo intentionally inserted this subtext into Ocarina of Time? Absolutely not, nor do I believe that Link needs to be an explicitly gay character. But, I mean, if he wants to be, I’m cool with that. I’ll love him all that same.

Romance has always been downplayed in the Zelda series; it’s frequently hinted at, but overt depiction is rare. I respect that direction for more than one reason. Link is a blank slate character — his thoughts should be your own, and any actions that he takes that you yourself wouldn’t under the same circumstances is a betrayal. I’d personally be really disappointed if he went for the blandest woman in all Hyrule instead of swimming upstream to spawn with the fish princess.

There are lots of characters that can be used to tell a story in video games, but when dealing with blank slate characters the ability to project your own sexuality onto them can be more important than even their gender or general appearance, and the inclusion of compulsory scenes of romance can ruin that illusion. I mean, if you’re straight, try to imagine Link sharing a passionate kiss with Darunia. Maybe you wouldn’t be completely repulsed if you’re open-minded, but you probably wouldn’t consider it your optimal Zelda romance. If your sexuality doesn’t align with what your character is expressing, it can make things uncomfortable, regardless of how accepting you are of it.

Gay people, especially those who are still trying to figure out which hole their peg fits into, are often taught to be ashamed of their sexuality. Like Link’s secret longing for cream in his coffee, it can lead to those feelings being repressed and unaddressed, which then can lead to psychological issues later in life. That’s why we have Pride Month in the first place: In hopes that one day we can all be comfortable with who we are. Maybe one day, Link will realize that he doesn’t have to keep chasing princesses, address those feelings he kept buried, and find himself wrapped in the loving arms of a friendly moblin.