Yesterday we provided some insights into what Interstellar Marines should play like. Of course, no one in their right mind would say “Hey, let’s make a shooter involving space marines!” anno 2011. But how about before Halo and Gears of War were released? What defines a space marine in the first place?

The story of the various sources of inspiration behind Interstellar Marines starts at a time when only Warhammer 40,000 tabletop players equated a ‘space marine’ with a big bulky piece of man-meat wielding ridiculously heavy weaponry.

The members of the tiny team at Copenhagen-based Zero Point Software are in their 30s, which can mean two things. Either they grew up before ‘having to deal’ with the glorious ’90s era of European techno music, or they grew up with movies like Aliens and awesome Amiga and early PC games. It’s probably for the best that only the latter ended up influencing their ideas for Interstellar Marines. 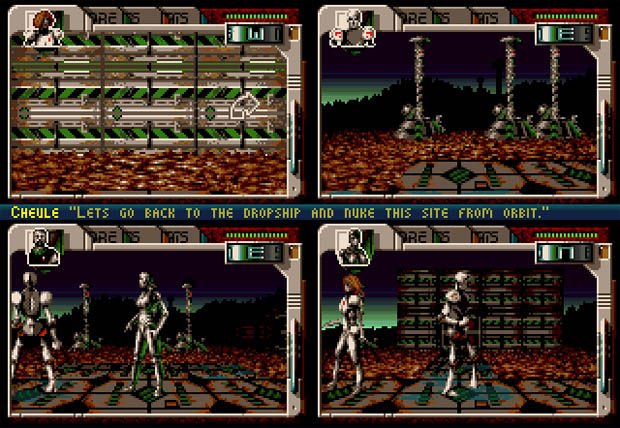 The original idea for the game was formed when Kim Haar Jørgensen (Game Director) and Nicolai Grønborg (Audio Director) were playing DMA Design’s Hired Guns back in 1993 — one of the first cooperative role-playing games with guns and a first-person perspective. Shortly after, Doom was released and the popular first-person shooter genre was born. Following those games, they started to play around with a narrative for their game.

The two friends would spend many years devouring co-op FPS games, until one day they started playing System Shock 2. Like so many others who experienced that game, it blew them away. For the first time there was a co-op FPS with role-playing game elements and actual atmosphere to boot. When Deus Ex came out a year later, that settled it: they would one day aspire to make an FPS that would build upon these RPG mechanics. But with four player co-op, and a hell of a lot more guns.

While gaming as a medium slowly matured, people still had to get their science fiction fix from TV series and movies. And it’s hard to think of science fiction movies set in space without thinking about the Alien franchise. Of all the Alien movies, the look and feel of the Colonial Marines that Aliens portrayed has inspired ZPS the most.

Whereas Star Wars depicts a fantasy space universe with space knights and space magicians, it’s far from a realistic portrayal of humans fighting in space. Aliens, however, tried to portray what soldiers in space would be like, with bulky and noisy dropships, APCs, sentry guns, motion sensors — basically the type of future vision of technology that doesn’t imagine humanity to have flying cars or hyperdrives in 50 to 100 years. 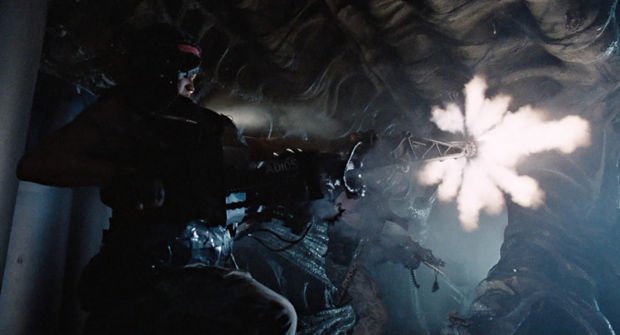 And although Final Fantasy is technically a game franchise, ZPS also loves the way mechanical devices and dropships behave in the cutscenes of some of the series’ installments. Kim Haar Jørgensen explicates: “Just the fact that in order to get into space, unlike Star Wars, in Final Fantasy it really is with solid rocket boosters or something similar that accelerates a dropship off, and it’s violent and it’s extreme. You just can’t fly out into space gliding like in a dream.”

During an interview with Kim Haar Jørgensen, I asked him the question that is bound to pop up in comments on every website that mentions Interstellar Marines: “Why space marines?” Are we really tired of the entire concept of a soldier in space? Kim thinks we shouldn’t be, and that it’s a matter of perspective.

ZPS’s idea of a space marine is not that clichéd Marcus Fenix type of future soldier, but simply elite, purely human soldiers in space. Candidates for the Interstellar Marines program in the game are recruited from Navy Seals,  Delta Force, S.A.S., and other elite forces all over the world. Weapons are based on kinetic or explosive ordnance, so don’t expect any BFG-9000s or pew pew laserguns.

The team doesn’t imagine future soldiers will be wearing any “Robocop body armor” in space either. They would be more likely to wear more Kevlar-based flexible environment suits during off-world deployments. And to be honest, when is the last time we had a decent shooter set in space where you weren’t a clone trooper or super soldier? Star Trek: Elite Force? 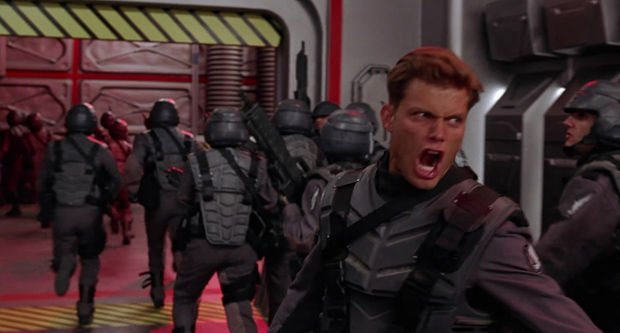 At this point, it should come as no surprise that Starship Troopers, another sci-fi classic with human technology that is mostly grounded in reality, has been further inspiration. But as Jørgensen added: “If you exclude all the ‘fun’ elements.” Not fun as in ‘this game will not be fun,’ but ZPS takes its interstellar marines very seriously, and there won’t be any tongue-in-cheek ‘Haha, look at us, we are marines in space wearing silly pants!’ type of commentary.

Gritty realism is perhaps as overused a buzzword as space marines are protagonists, yet it’s exactly what you should expect from Interstellar Marines.  Jørgensen explains: “The things we want to do with science fiction is to create a more realistic and believable [world], so with respect to Star Wars, Halo, and Gears of War, it’s not like that. We don’t want to have green lasers and aliens with red eyes, we want to have it be more realistic so people can believe in it.”

“I think what Crysis is doing is fantastic. There’s a lot of things that works in that universe, but it still bugs us that aliens always have to be squids. It feels a bit off and obviously it’s cool for shooting and whatnot, but we want to take it a bit further.”

So there’s no need to groan and worry: the squad of interstellar marines you’ll be playing with is less like the archetypical male-adolescent power fantasy space marines we’ve grown accustomed to, and more like a Rainbow Six squad trained for off-world combat resolution. 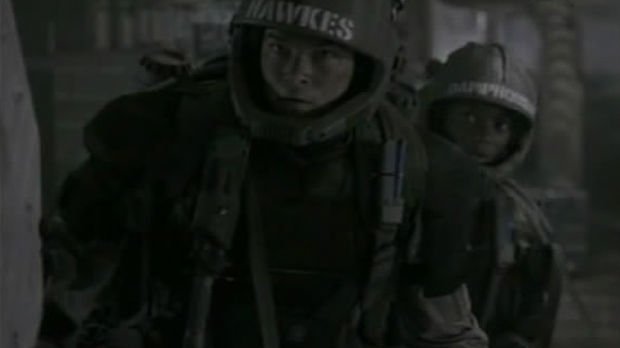 Of course, that begs the question of what the aliens will look like, and what their role in the overarching storyline of the trilogy will be. Kim Haar Jørgensen didn’t want to get into too much detail regarding the look of the aliens themselves, but did share: “I can say for sure that the aliens you’ll be meeting, instead of us coming from apes, are coming from another evolutionary tree that actually evolves in the same way we do but with certain different benefits.”

V reptilians? Silicon-based lifeforms? Chigs? Who knows! At least we know they won’t be xenomorphs or space squids. Jørgensen did go into the storyline, which will probably ring a bell if you were fortunate enough to have watched the classic 1995 TV series Space: Above and Beyond.

On a remote planet, the ITO has set up a military colony where scientists perform experiments. One of their experiments triggers something on that planet that alerts the aliens to humanity’s presence. Given that the game involves shooting, humanity’s first contact probably won’t go too smoothly.

Jørgensen: “It is like, we really want to have it be like the story in Star Wars with Luke slowly finding out [about the wider universe], so it’s not going to be just about a full scale invasion in the beginning of the first game. It’s gonna be about the progression mankind takes to realistically set up a scenario where first contact becomes a reality. And then we want to try to answer all the questions [that arise]: you can’t communicate [language], you can’t communicate morality and ideas of right and wrong.” 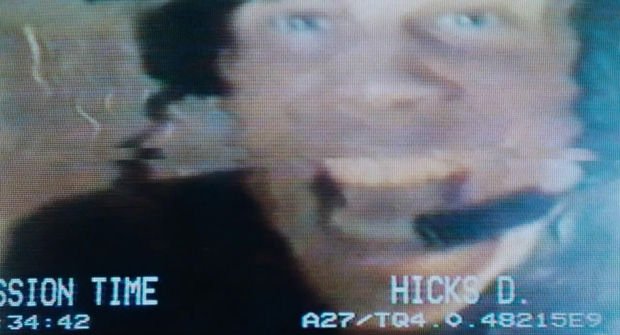 We’ll have to see for ourselves whether Zero Point Software can live up to its promise and deliver on the studio’s vision of a realistic science-fiction shooter. Aliens: Colonial Marines and whatever sci-fi shooter Respawn Entertainment may come up with are still nowhere in sight, and one can only speculate on whether or not those will be pure shooters or FPS/RPG hybrids.

Which brings us back to the initial thought: is ZPS crazy for creating a game called Interstellar Marines featuring space marines yet again? Well, the guys might be crazy for the amount of time and effort they have already put into the project. But given their rationale for the subject matter and their inspirations, and the way people have previously foamed at the mouth at the mere mention of “Call of Duty in space” or Aliens: Colonial Marines, there might be is plenty of room — and a market — for a shooter with a different brand of interplanetary soldier, or Interstellar Marines.

Check back tomorrow for our last installment on how ZPS is funding its project, how their preview games fit into the grand scheme of community-iterated design and what the future holds for Interstellar Marines.