Coinciding with the release of Windows 7, Microsoft has opened their very first Microsoft Store in the Scottsdale Fashion Square mall in Scottsdale, Arizona. People camped out overnight in sixty degree temperatures (brrr!) to be among the first to enter the store, and the line persisted in being almost a quarter of a mile in length hours after opening. The allure of free tickets to an Ashley Tisdale concert may have contributed to that.

I took the opportunity to swing by the store and see what all the fuss was about and I have to admit that I walked away rather impressed with what Microsoft is doing here. Follow along with me as I take you through what this new retail outlet has to offer gamers.

Upon walking into the Microsoft Store, it immediately became clear who the software giant was trying to be. Anyone who has spent any time in one of Apple’s brick-and-mortar locations would quickly draw parallels between the stores’ clean and sparse designs. Rows of tables bearing laptops and desktop monitors feature Microsoft’s products and offer a hands-on approach and the Answer Desk, a domineering counter at the rear of the store, is clearly a carbon copy of Apple’s “Genius” program.

That said, Microsoft has crafted a beautiful store even if it’s one that has been aped from the competition. It’s open and airy, the staff are friendly and knowledgeable and there is some very sexy tech on display, including the table PCs we’ve seen pop up at E3 and other events. But what about the games? 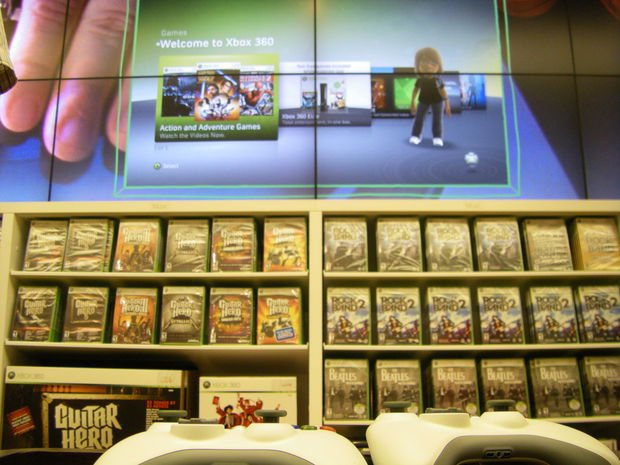 About 15% (roughly 150 sq feet) of the store’s floor space is devoted to Xbox 360 products, taking up about a corner of the store. Five demo stations — including one with Xbox 360 Xplorer guitars in lieu of standard controllers — dominate the area, their video displayed via projector on the wall. These are not so much kiosks as sleek, wooden stands holding the controllers about five feet away from the wall

Below the screens are the products. The entire line of 360 accessories are available and a rather impressive selection of software is on offer as well. I was pleasantly surprised to not see an overwhelming dominance of Microsoft-published titles, either, as the games on display cover an excellent cross-section of products that represent the full range of the console. 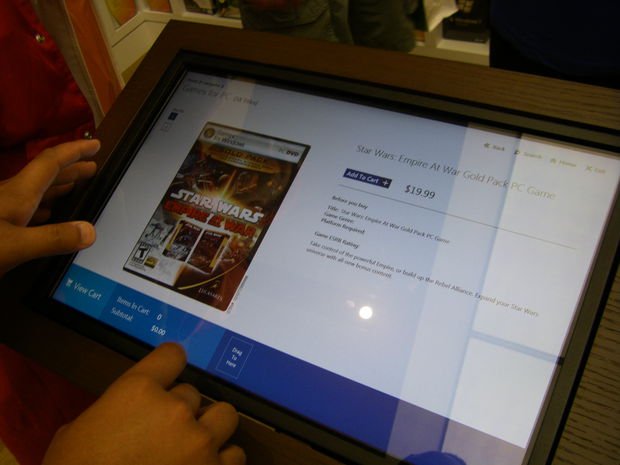 If you’re more of a PC gamer, you’re likely to be a little bit disappointed at first. There is a small section in the opposite corner with boxed games and accessories, but it pales in comparison to the console offerings. Fortunately, there are six kiosks with touchscreen displays situated throughout the store where shoppers may order PC software and have it printed on-demand in under four minutes.

On the whole, I’m very impressed with what Microsoft has managed to do here. Does it look like an Apple Store knock-off? Certainly, but I’m not sure that’s going to matter. The people who care about that already aren’t likely to be shopping in a Microsoft Store to begin with. But, for consumers of the biggest software company in the world, having a place where you can go to buy what you want when you want it in a clean and helpful environment has been a long time coming.

Check out the gallery to see more photos of the new Microsoft Store. Is this the sort of place you can see yourself shopping?