It seems like everyone and their mothers are getting in on the MOBA (multiplayer online battle arena) craze. With League of Legends and Dota 2 dominating the market, and the continuing rise of eSports, it’s evident that this genre is here to stay. Shortly after the reveal of its new free-to-play MOBA at GDC, WB Games and the developers at Turbine packed a group of journalists into a room for a quick game of Infinite Crisis.

Loosely based on the popular Crisis on Infinite Earths and Infinite Crisis storylines, the various dimensions of the DC Universe collide and parallel versions of famous hero and villain characters must battle it our for supremacy. Taking cues from other established games while putting their own spin on the popular genre, the devs at Turbine plan to create an engaging and fun MOBA title, while at the same time making a love letter to DC Comics lore. 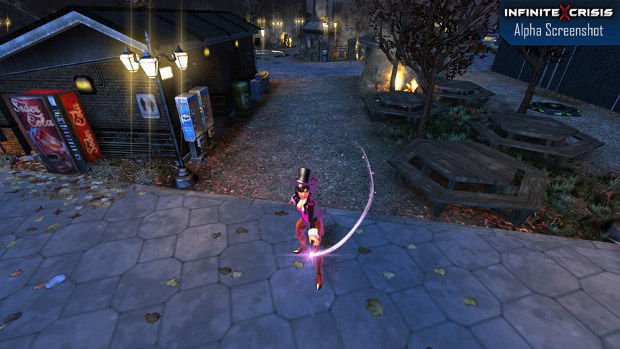 One of the big goals that Turbine set to accomplish with its free-to-play game was to allow players to experience multiple variations of their favorite characters. As one of the rare MOBA titles based on a license, there is already a set of expectations that Turbine has to meet.

Players can take control of a variety of different heroes and villains from the DC Universe, and while popular characters such as Superman, Wonder Woman, Batman, Green Lantern, Flash, and Zatanna will be there, much of the roster comes from one-shot stories that feature a unique twist on iconic characters.

For instance, you can play as Batman and Catwoman from the Gotham By Gaslight elseworlds title and have them go toe-to-toe with a characters such as Vampire Batman from the Red Rain and Bloodstorm storylines. Many of these characters are obscure enough that they won’t be featured elsewhere, so Infinite Crisis is likely the only chance you’ll get to play as them in a game. That’s already one thing it has succeeded in. 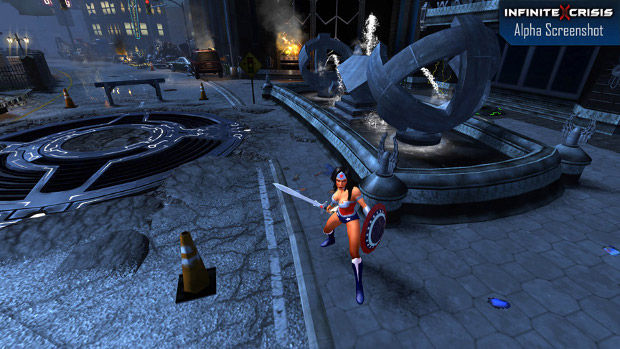 As there are so many different universes within DC comics lore, Turbine has a near endless amount of characters to include in planned updates. This also allows the devs to have fun with characters that aren‘t as well-developed as others. One feature teased was the alternate costumes for each character. In particular, Gaslight Batman has a cool-looking Samurai outfit that’s in keeping with his neo-Victorian steampunk aesthetic.

For the most part, Infinite Crisis’ gameplay is pretty consistent with what you’d expect from other MOBA titles. Players will work in teams of two to capture points scattered around the map, level their character and acquire artifacts for buffs, and defeat opposing players. Combat is still fast-paced, balanced, and has a lot of depth for players to master. Much like LoL or Dota 2, players can customize their favorite hero and villain characters to suit their play style before combat, and with the inclusion of artifacts, this will give a sense of satisfaction as you see your character increase and grow in skill over the course of the battle.

One big feature that the developers are proud of is the inclusion of destructible and interactive environments, dubbed “Destructive PvP.” Players will be able to pick up cars and other heavy objects to bash enemies with, activate traps, and even create shortcuts across the map. Turbine hopes this will give maps some added personality and also create a new layer of strategy for players to consider.

After spending some time with it, I came away pretty impressed and entertained. Turbine has a good eye for making action/RPG titles, and if past work on games like The Lord of the Rings Online and Asheron’s Call is any indication, the amount of content provided will be worth looking forward to. Though it’s still a ways off, Infinite Crisis has certainly caught my attention, and MOBA fans may want to keep an eye on the official site for upcoming info on the beta.