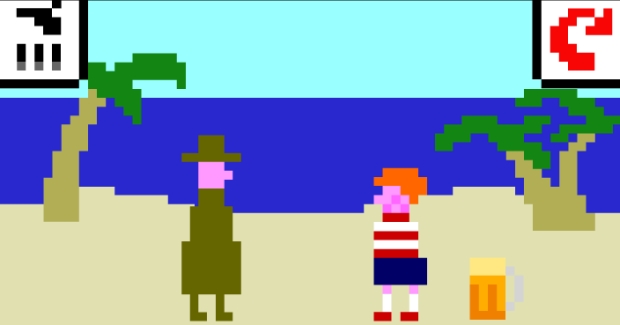 I will be the first to admit that Where’s an Egg? has some of the least interesting base gameplay you’ll ever see highlighted on Indie Nation (and that’s saying something). It doesn’t have a cool story to tell, or anything terribly perceptive to say about humanity. It is, however, one of the most interesting detective games I’ve ever played.

It’s not just a detective game in the sense that you play some sort of private eye (if the five or so brown pixels arranged on his head are meant to represent a fedora, anyway) presumably tasked with finding a missing egg. That’s just the surface mystery, which can be solved completely on accident and with absolutely no forethought. The real mystery is: how do you play the game?

The prologue and instructions are either altogether absent, or conveyed indecipherable faux-Russian. The only direction you are given comes in the form of the game’s poorly-localized title. Will you be able to decipher the game’s image-based interface and figure out what the hell to do before a generous 999-second timer expires?

You can play it here, or hit the jump as I go on about it some more (spoiler-free).

I’ll be the first to admit that Where’s an Egg can feel overwhelmingly frustrating, at first, to the point where a fair number of people who try it may well give up after a few minutes, or dismiss it as an unintentionally horrendous humor game and leave it at that. With literally no interface explanation or direction save for the title, Where’s an Egg is a remarkably easy game to put down.

Which is a shame, really, because the essential gameplay is so simplistic that after a few minutes of sustained experimentation and deduction, nearly anyone could figure out exactly what needs to be done. Where’s an Egg derives satisfaction not from punishing the player by obfuscating a needlessly complex set of interactions, but by placing an incredibly simple set of mechanics in front of the player, and seeing if he or she can figure them out with no explanation. The player gets essentially zero feedback regarding whether or not they’re doing the right thing, and is thus required to examine the underlying mechanics with a much more critical and analytical eye than most thinking-man’s videogames would ever dare to ask.

In a weird kind of way, Where’s an Egg is one of the few truly deductive games I’ve ever played. Adventure games, for instance, basically ask the player to read the designer’s mind in order to figure out the intended solutions to arbitrary puzzles. I don’t feel like I’m really using my head when I tell Guybrush Threepwood to sprinkle flower petals on a steak in order to drug a pack of vicious poodles — I feel like I just made an educated guess and got lucky that I happened to pick the one inventory combination out of thousands that the designers arbitrarily decided was the “correct” one. I’m really just mentally travelling down a preset path beset by dozens of locked gates, while I fumble to find the right keys in an infinitely large keyring.

Where’s an Egg, while undeniably user-unfriendly, requires more nonlinear and imaginative thinking. The game sits there like a puzzle box, with all the clues I could possibly need to unlock it sitting out in the open; I can come to realizations about the interface at any time, in any order. I don’t need to read the minds of the Brothers Chaps in order to understand how to play Where’s an Egg; I just need to pay attention to how the game reacts to my inputs and create a mental model of what, exactly, the game is telling me. My head won’t explode with a forceful epiphany when I finally figure out how to play the game; I’ll feel something slightly more intimate. Slightly more earned. A gradual, honest realization, rather than a cheap, sudden, “use-Max-on-the-water-and-then-on-the-fuse-box-to-stop-the- Tunnel-of-Love-ride” sort of surprise.

That said, I don’t really dig the fact that you can accidentally win the game. As players will likely flail around randomly at first, clicking every button just to get a result, it’s entirely possible that they’ll simply get lucky, win the game without thinking, and put the game down, forever. It would have been nicer if the game prevented the player from winning until they’d at least figured out which of the witnesses was lying through simple conversation. As it stands, you can run around shooting Russians willy-nilly and still stand a one in three chance of winning the game. The luck factor seems to go against the game’s goal of gradually revealing things to the player through careful thought and consideration.

Still, though, I find Where’s an Egg intensely interesting even if it isn’t particularly fun or replay-friendly. If after finishing it, you’re still in the mood for games that revolve around confusing the player’s understanding of the game world, you might give The Gostak a try.