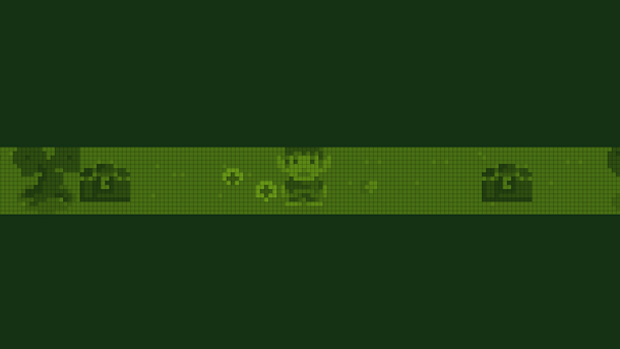 My how short we’ve come!

Videogames sure have come a long way, haven’t they? Well, then again, maybe they haven’t. Sure, games now are way more advanced than they were twenty years ago. But what about the untapped potential within the medium? Videogames are, after all, an interactive medium unlike any other, and yet the interactivity is often downplayed when advertising a game, as if it doesn’t matter.

Evoland acts as a sort of interactive history of videogames. It reminds me of DLC Quest in that there’s a good amount of commentary associated along with it. It’s worth playing just to remember how much we have, or haven’t, progressed thus far.

I’d recommend playing through it before reading on. Play Evoland here — it should only take about ten minutes.

Evoland starts off as simple as it gets: moving in a single direction. It quickly ramps up into a Zelda­-esque scrolling adventure game. It all seems harmless enough, until some of the game “upgrades” start altering gameplay in unexpected ways.

The first thing that caught me off guard was the upgrade chest that added an ad banner to the side of the screen. Stunned, I sat in silence for a moment as I realized this game was more than just a neat idea. The placement of ads in games is certainly nothing new. Hell, I grew up playing Crazy Taxi and now I’m addicted to KFC and The Offspring.

It isn’t very often that I feel as if game advertisements are going “too far,” but perhaps the premise alone is bad enough. A lot of time spent playing videogames is time spent away from everything, enveloped in something different. An ad, whether it be a banner on the side or, even worse, an in-game advertisement (ALAN WAKE) breaks any sort of immersion within that game.

The other unlock that has a huge impact on the game itself is “Diablo Mode.” Diablo Mode gives your character health and an experience bar. This turns the game from an old-school HP system (a single hit equals death) into a very easy and sort of boring adventure, as it takes an insane amount of hits to actually die. On top of that, right afterwards you need to get your character to level 10 before unlocking the next room which quickly becomes the most tedious thing ever.

The quickest way to gain levels is to sit on top of the enemy spawning portal and hold the attack button, killing them as soon as they enter the room. It’s boring, it’s annoying, and it’s so goddamn accurate. I quickly had flashbacks of doing Mephisto or Cow runs in Diablo II. I had fun doing them at the time — I think — but looking back it just seems like something an insane person would do.

Evoland covers a lot of videogame evolution in about five minutes. Gaming, the medium with the most potential, has its history distilled down into 350 seconds. At some point, Chris Hecker, creator of SpyParty, mentioned that he thinks videogames are now where movies were around the 1920s. In other words, there is a ton of evolution in store. I tend to agree with his statement, especially when game evolution is put into context like it is in Evoland.

That being said, I am so goddamn excited for what’s left to come.