I don’t really play all that many indie games.

It’s not that I’m prejudiced towards high-profile, big-budget titles — I love PixelJunk Eden, for example — but most of the games that Anthony has highlighted in this space are PC games. My piece-of-sh*t laptop is over four years old, and it can’t even handle Flash games very well without letting me know (usually through gameplay slowdown) that it doesn’t like — or is incapable of — doing what I’m asking it to do at that moment.

That said, I tried out Auditorium, a Flash game developed by Cipher Prime, on the recommendation of N’Gai Croal, whom you may know as the author of Newsweek’s Level Up gaming blog. Cipher Prime, by the way, is two guys, Dain Saint and William Stallwood, and they’ve built quite an amazing little game. It’s the kind of experience that doesn’t really need instructions (though they’ve provided them) or explanation (though I’m going to provide it), so I suggest you play the demo of Auditorium yourself.

Or you can follow me to the jump to see me ramble on about it. 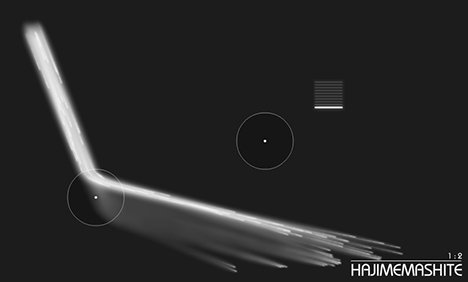 I love music. I love videogames. Consequently, I love Auditorium.

Well, that thought process doesn’t always play out just like that, but in this case, Cipher Prime has managed to create a beautiful synergy of the two mediums, a game in the vein of Jonathan Mak’s wonderful PSN/PSP shmup, Everyday Shooter, or Dylan Fitterer’s excellent Steam-distributed rhythm game, Audiosurf. Auditorium, however, is a puzzle game at heart, and it’s controlled solely with the mouse.

Auditorium is about orchestrating a harmonizing symphony by layering different instruments and musical lines over each other. That all sounds very abstract, and the game’s sparse instructions seem to have been written with that in mind, but it was done in that manner for a reason — Auditorium is meant for you to figure out and mess around with (it’s much better that way). The main element in the game is the Flow, a stream of energized particles that always starts out emanating from a particular point on the screen, white as snow. The companion to the Flow is the Audio Container: you’re going to want to direct your Flow into the various Containers that you see, with the caveat being that the color(s) of the Flow has to match the color(s) of the Container in question.

The game provides a number of ways to manipulate the Flow. Directional Controls (up, down, left, right) send the Flow off in a, well, direction, while the Attract Control spirals the Flow inward; most of the other controls have yet to be revealed. Then there are obstacles to contend with, such as Color Spheres, which change the Flow’s color, and Wormholes, which transport the Flow elsewhere. You’ve got to take all of these into account — and use all of them to your advantage — in order to fill the Containers and progress through the game. 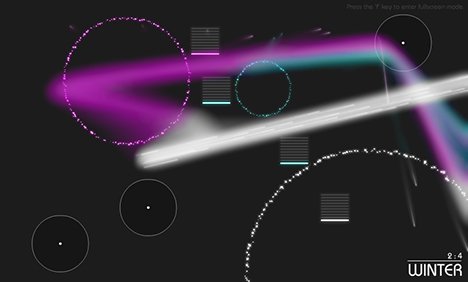 As you might expect, completing the puzzles becomes increasingly complicated and difficult, with pitch-perfect (pun intended) placement of Controls required to fill Containers. I got stuck on a number of levels in the demo, but since this is the kind of game that allows for multiple solutions to each puzzle, simply moving things around will often get you going.

The true joy of Auditorium comes in its layers of music. When you send a properly manipulated Flow into a Container, the volume of a particular instrument will swell as the Container fills. The first Container might produce a simple violin motif, while the next — perhaps a red one — adds a piano riff. All the music was digitally composed by Saint, but again, it’s not chiptune-like bleeps and bloops; as you fill more of the on-screen Containers with particles, more and more instruments harmonize, and the music slowly builds to a grand conclusion: when all the Containers are properly filled, the level is complete. Unfortunately, you only hear each level’s full symphony for a scant few seconds before the next one loads up; thankfully, the developers say they’ll include an option in the full version for you to stop and listen for a bit.

The music may be the focus of the game, but the visuals are equally stunning, especially in the later, more colorful levels. Particle physics also play a real part in Auditorium, which I find quite impressive for a Flash game. In fact, Cipher Prime needed to build their own development framework, Tricycle, since, as Stallwood explained in a post on the game’s history, “Flash really wasn’t meant to do this kind of particle math or rendering.” Speaking of posts, you can keep up with Saint and Stallwood on their development blog — they’ve got all kinds of information on the game. 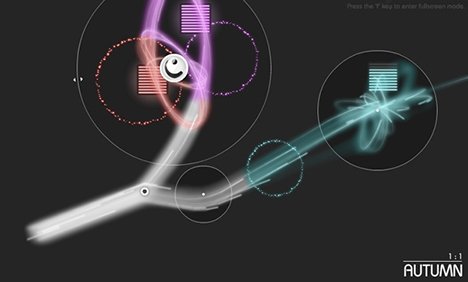 Apparently, they’re trying to finish the full game by the end of the year. Right now, the demo has around fifteen levels separated into three acts (with a fourth “preview” act comprising one level), while the full game will have twenty or so acts. The full release will also include a level editor, which I think could be a fantastic feature in a game like this (they’re also looking into letting players use their own music, though obviously, there are all kinds of copyright headaches involved). Cipher Prime has also received many requests for an iPhone version, which they would like to do — in fact, the full release is intended to raise funds for such a venture.

As far as I’m concerned, these guys have got a brilliant product on their hands here. When you can get into a game just by having someone refer you to it, and you can play it without even bothering with instructions, I think it’s great. Auditorium is such an intuitive and enveloping experience that I can’t wait for the full version to come out. I’ll certainly be picking it up — will you?