There hasn’t been a balls-out action title highlighted on Indie Nation as of recent, and more than a few people have suggested spotlighting Daniel Remar’s Iji.

Though it doesn’t do anything particularly new, what it does it does pretty well. The protagonist has a crapton of different skills she can upgrade, all of which can drastically change how one plays through the game. Wanna be a badass martial arts fighter? Go ahead. A gun-toting Rambo? Put some points in weapons. A hacker and safecracker who hoards items and weapons to use on the baddies? It’s all there.

Iji is a linear game that allows for a surprising amount of player choice. It is also quite pretty, resembling a slightly more active Out of this World.

You can get the game  free from here, or hit the jump and hear more of my thoughts on it.

Iji‘s not bad. It’s not great, and it’s not my favorite Indie Nation game I’ve ever highlighted, but it’s a fun diversion for a little while. The stat upgrades and nonlinear paths are very welcome design choices, but they don’t go as far as I would have liked them to.

For instance, at the beginning of the game I decided I didn’t feel like running around looking for ammo all the time. Rather than investing in weapon points, I figured it’d be more fun to turn Iji into a martial arts master by maxing out her fighting stats. Upon trying to take down a few troopers, however, I found my main complaint with the game: the levelling is based on a sort of binary, “you’ve got it or you don’t” system. 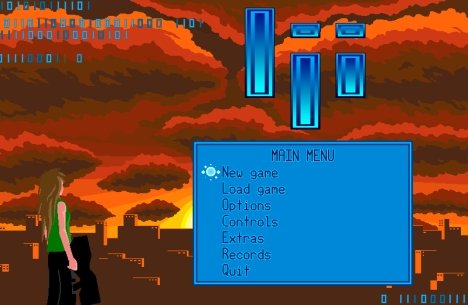 If you don’t have, say, three points in fighting, you can’t attack a certain type of guard. It’s not that you don’t do much damage, or that you can’t knock him down — it’s that you literally can’t attack him. Your kicks simply do nothing, as he blasts away at your health bar. Only after putting the requisite amount of points into your skills can you screw with certain guards, and even after adding more points, you don’t do any more damage to those guards. One type of guard, once you’ve got enough points to attack him, will take three kicks to die no matter how high you’ve leveled your physical combat stat.

Now, on the one hand, this keeps the game decently balanced (I say “decently” because the protagonist has a ludicrous amount of health which compensates for whatever balance issues there might have been), but it also makes levelling the player’s individual stats feel less like you’re actually improving your character and more like you’re simply collecting keys to unlock doors. If you have five points and upgrade weapons three times but only upgrade hacking twice, and you find a crate that requires a hacking skill of three, then you’re simply out of luck: the game doesn’t make the hacking challenge harderdue to your lower skill, it just locks the player out of accessing it at all. 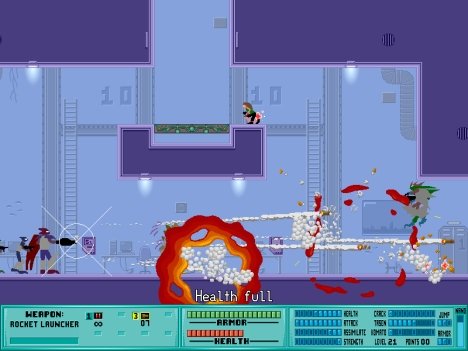 This personally lead to a sort of all-or-nothing point distribution, where I was so afraid of wasting a few points on a new stat that might leave me incapable of punching a bigger robot with my fighting stats, that I just spent the first third of the game only levelling up my fighting ability, then only my hacking. Though stuff like health and weapon efficiency operate the way you would expect stats to do, the stats that actually affects which routes you can take and when feel far too absolute, in my opinion.

But I’m bitching about specifics of a game which is, for all intents and purposes, a fun way to waste an hour or so. It got a little repetitive for me after about an hour (if you’ve beaten the game and it gets really good and/or different near the end, please do let me know), but the controls are very fluid, the graphics are pretty interesting, and it’s really goddamn polished. Definitely worth a try, at the very least. 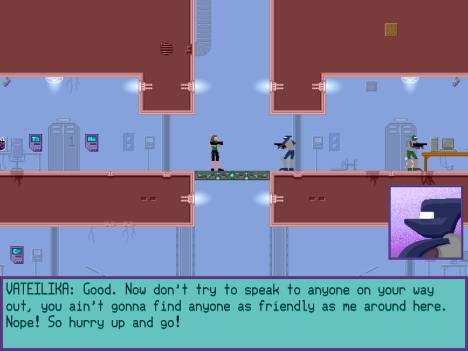 Also, I didn’t pay any attention to the story as it was delivered through little text speech bubbles and I fear my soul has become so corrupted by seamless ingame storytelling that I now have no patience whatsoever. I know there’s something about robot guards, or something, and then these aliens who come and fight you and the robot guards. And the sky is a weird color, so it’s probably the past-future or something. I dunno. Just try it.