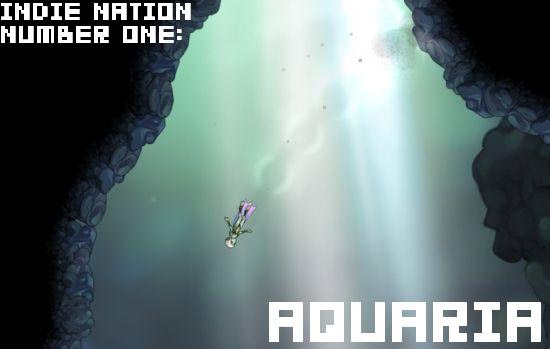 For every formulaic, boring sequel of a remake of a port to come from mainstream game studios, there’s at least a half-dozen unusual, original, and fun titles coming from independent game developers from all over the world. That so many of them go more or less unnoticed by the gaming community at large is, to put it bluntly, a goddamned shame.

It is for this reason that I’m proud to kick off Indie Nation, a new weekly article wherein I bring up an independent game you probably haven’t bought or downloaded, tell you how friggin’ good or artistic or interesting it is, and continually urge you to give it a try. If you’re sick and tired of crappy mainstream game after crappy mainstream game, or if you liked this article, this new series is for you (and you might also want to think about checking out The Independent Gaming Source).

This week I’ll be looking at Aquaria, the 2D aquatic exploration title from Bit Blot. Aaron Linde has personally attempted to convince you of its glory on several occasions and now, with the game actually being out and all, I must concur with Linde and tell you the following:

Don’t even goddamn think about pirating it.

In some ways, Aquaria hearkens back to the days of epic, two-dimensional, exploration heavy adventure games. I say “in some ways” because, ultimately, Aquaria is its own game: it may have the massive maps and exploration of a Castlevania or a Metroid, but its mood, controls, and specific gameplay mechanics give Aquaria its own unique, wondrous identity.

Aquaria follows the story of Naija, a humanoid underwater dweller who, upon completing what initially seems to be a marathon session of meditation, loses her memory. Once the player takes control of her, she (through voice-over narration) mentions that she feels restless. Considering there is nothing to do in her meditation chamber other than swim around and look at the pretty background, the player shares the same emotion and sends her off on a journey of exploration, combat, and puzzle solving.

And explore you will — the world of Aquaria is big. As in, Dracula’s Castle big. The Zebes underground big. So big that, initially, you might be a little overwhelmed. Upon exiting Naija’s meditation room, the player immediately moves into an overworld room which seems to have no less than a dozen twisty, meandering tunnels flowing into just as many exits leading God knows where.

The feeling of pure stupification one experiences upon seeing these myriad paths is, I think, completely intentional on Bit Blot’s part; Aquaria is an exploration game, after all, and nothing helps to increase the physical scope of a game like being immediately overwhelmed with twelve or thirteen paths and no immediate way to choose which one to take.  Naija and the player want to explore the underground; initially, it seems like both have bit off more than they can chew.

This feeling of confusion and smallness soon passes, however, and you begin to see that only one or two of the paths are immediately open to you — you’ll need special abilities to access the rest. Naija’s gains new abilities by learning songs, and activates those abilities by playing them. Holding down the right mouse button opens up a radial music dial; by moving your mouse over different icons in the dial, Naija will sing different notes and, if you string together the right combinations, activate a special power. Imagine the ocarina from Ocarina of Time, only much more intuitive. A few hours into the game, you’ll be effortlessly activating shield or lift spells with the song menu as if it were second nature — and all without the aid of any real HUD.

Yes, Aquaria is a game of minimalism. As you swim around Naija’s underwater world (using only the mouse), you’ll see no health bar, no point counter, no ammo display. The focus is on Naija’s world, and Naija’s world alone: you can head into a menu to check which items you’ve collected, of course, and there’s an unobtrusive minimap in the corner of the screen, but Aquaria‘s main priority is immersion. After you’ve solved a few puzzles and gained some new abilities, the game begins to subtly work on you.

The soothing music draws you in. The wonderful 2D artwork becomes even more appropriate and pleasing to the eye. The urge of exploration draws you further, and, while I wouldn’t be so melodramatic as to suggest you forget you’re playing a game, you definitely get into a sort of groove.

Yet beyond the Myst-esque exploration and puzzle solving, there’s a lot of action to be had. Naija quickly learns to transform herself into numerous different battle-ready forms, each with their own specific set of attacks. Just as it is a bit jarring — but somewhat pleasant — to switch from serene exploration to a hardcore boss battle, it’s kind of a shock to see the peaceful, innocent Naija turn from a song-singing water nymph into her dark, fireball-throwing energy form at the drop of a hat. While the game puts you in a pretty peaceful mindset during its exploration and puzzle solving sequences, it’s not at all afraid to mix things up with the energy, beast, and nature forms.

All in all, Aquaria is damned good. If you’re at all a fan of 2D adventures — and if you aren’t, what the hell is wrong with you — you’ll find something appealing in its labyrinth of caverns and corals. It feels retro, but totally new; classic, yet fresh. Little surprise it won the grand prize at IGF.

Aquaria costs thirty dollars, which is just about reasonable considering how damn big the thing is, and the fact that it comes with a (disgustingly intuitive) level editor. The modding community hasn’t quite hit its stride yet, but the level editor is easy and fun enough that it won’t be very long.

Again, check out the demo and see for yourself. If you so much as attempt to pirate it, I will come to your house and stamp on your testicles until they squish under my feet like grapes. Then I’ll take your hard drive.