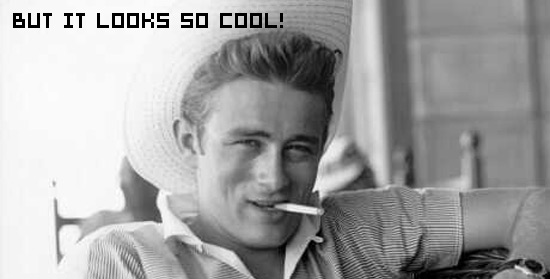 Normally I’d be the first to point out the flaws in any scientific study purporting a real link between violent media and real-world violence, but this report on Yahoo News — assuming it’s accurate — doesn’t seem to have any flaws. According to the article a study was recently conducted by L. Rowell Huesmann and Dr. Brad Bushman of the University of Michigan that found violence in films and games was more detrimental to society than every factor with the exception of smoking.

To quote the experts:

“Exposure to violent electronic media has a larger effect than all but one other well known threat to public health. The only effect slightly larger than the effect of media violence on aggression is that of cigarette smoking on lung cancer …”

“Children are also spending an increasingly large amount of time playing video games, most of which contain violence. Video game units are now present in 83 percent of homes with children,” he added.

Their findings have been reported in the Journal of Adolescent Medicine.

After reading the piece at Yahoo I did some digging into the backgrounds of the two gentleman in question and I have to say the two of them seem as unbiased as anyone in the field. They’re both well respected, both hold positions of great merit at a reputable institute of learning and neither have any public evidence of prior inclination toward coaxing data to suit their needs.

As much as we all argue the violence-in-gaming point when presented by pundits and detractors of the industry, there just isn’t anything to argue against here, unless they managed to completely disregard classic scientific method. I applaud Mr. Huesmann and Dr. Bushman for their work here, and humbly bow to their detailed findings.

[UPDATE: Jim makes a good, if uninformed, point. For those who would like to see the bits where it draws correlation, you’ll have to sort through the entire study as I did before writing this. For those without the attention span or access, here’s the abstract so you can at least get a feel for the concepts behind the study. Doubt me if you’d like, but at least do the research yourself before you claim foul play. — Nex]