One thing I don’t see discussed often in regards to exercise is the high price tag involved with intense workouts. Although you can find a local gym for fairly cheap and get fit on your own, getting to the next level sometimes requires hiring a physical trainer, joining classes, or ordering routines — which can get extremely expensive.

So I was really skeptical when Microsoft announced that Xbox Fitness would offer free workouts that are normally on the pricey side — like P90X and Insanity. But after trying it out for myself I’m mostly happy with the results, even if the app itself has a long way to go. 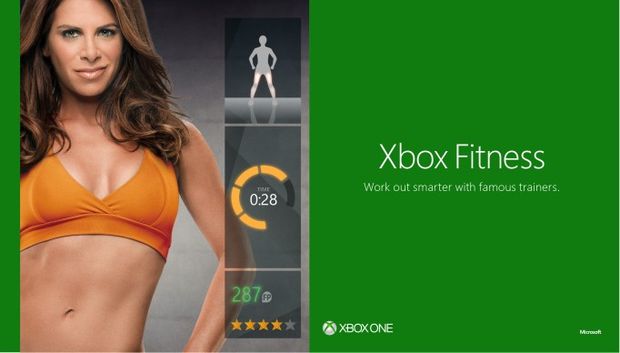 From the get-go, you’ll have access to a variety of routines, including kickboxing, typical cardio workouts, and licensed content like the aforementioned P90X. Microsoft brought out the big guns in terms of celebrity endorsements, as Tony Horton, Shaun T, Jillian Michaels, and Tracy Anderson are all heavily involved with the project, contributing commentary and of course, their videos. Kinect Fitness also offers quick 10-minute workouts, or intense programs up to 40 minutes or more — so you can fit it in your schedule/energy level. P90X and Insanity are a few of the longer ones, which you’ll want to ramp up to.

Basically, all Kinect Fitness is doing is playing a workout video for you, with a new enhanced UI overlayed on top of it, incorporating Kinect functionality. The Kinect 2 is much more accurate than the Xbox 360’s iteration, as it can read limbs more accurately, to the point where what you’re doing actually matches up with how it rates your performance. It sounds underwhelming at first, but here’s the beauty of it — it turns a real workout into a videogame.

Not only are there achievements involved in the process, but there are timers that show you how long you have to go for each set of exercises, and the game is constantly scoring your technique, kind of like Dance Central. So if you need to do some leg work then switch to running in place for cardio, the Kinect senses each part and judges how well your body matches up with the requirements.

By itself this would be a pretty solid way to actually feel involved, but the best part is the “challenge” system. It’ll pop up at various intervals of the workout (usually the more intense parts), and give you a “score” to top based on your age group. If you work hard and beat the requirement, you’ll earn more medals and achievements, as well as a leaderboard spot. To some people this concept probably sounds stupid, but I know at least a few folks (including myself) who would feel more motivated because of this mechanic. The app’s feedback also tells you what parts you particularly sucked at, so you can improve on your next go. 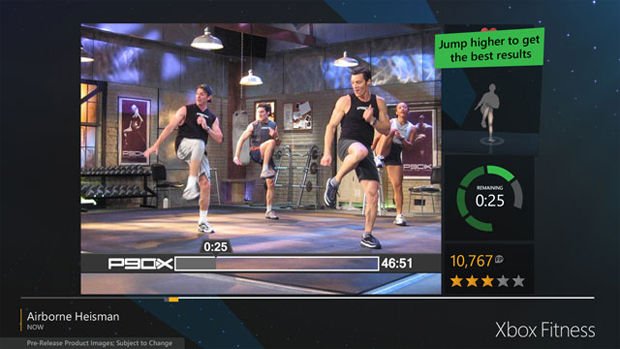 But it’s not a perfect app by any means. The main problem with Xbox Fitness is the absolutely dreadful user interface. There are tons of different categories of routines to sift through, including personalities, intensity, and brands. Once you find your favorites it’s easy to stick to them by accessing your “recent” history on the main menu, but sifting through and finding them is a challenge.

Another potential hangup is that you need Xbox Live Gold to access almost all of the app. A few routines are free, some are paid (even with Gold), but most of it is gated behind Microsoft’s subscription paywall. Although Xbox Fitness technically adds value to Xbox Live (for once), it’s probably not worth subbing for unless you work out daily. Because really, when you add in the fact that some of these routines are a couple hundred dollars, a Gold sub doesn’t seem too bad — again, if you’re going to actually exercise. Considering the “free” elements run until December of 2014, that’s plenty of time to take the initiative.

Xbox Fitness has a few rough edges, but I actually found myself enjoying the gimmick of “scoring” workouts. The legitimately enhanced Kinect 2 actually feels like it’s picking up more than just general movements, and the added incentive of achievements and mid-exercise challenges are genius. Hopefully some updates will come along to really sell the app in the future, but until then, current Gold subscribers should definitely check it out for free.

After you pick up your shiny new Xbox One, you can find it under the “Games” tab.