Shooting for the moon

Back in 2011, Re-Logic released Terraria, which gained massive popularity for its procedurally generated sandbox gameplay that had combat and objectives for those wanting more than just a place to go and dig.

It was a surprise hit for me, and I ended up spending hundreds of hours with it. Eventually, life happened and Terraria‘s creator Andrew “Redigit” Spinks announced that it would not be updated any more, but also that artist Finn “Tiy” Brice had moved on to form Chucklefish, whose first project would be what many consider to be a spiritual successor to Re-Logic’s title, but set in space. Starbound was born.

Fans backed the project fervently, with its homegrown crowdfunding campaign topping a million dollars in under a month. Currently, they have sold over 180,000 pre-orders, taking in more than $3.7 million in support of the project. Starbound is an indie sensation, but while it does strive to be seen as its own entity, it will always be compared to its predecessor.

For the most part, comparisons between Terraria and Starbound are apt, and they provide a good starting point for discussion, but in the end Starbound is much more than just “Terraria in space.” 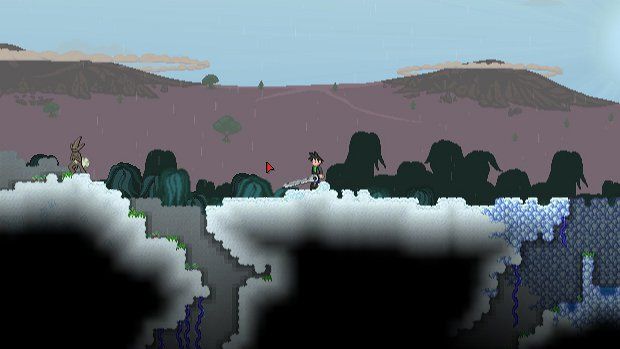 Terraria veterans will feel familiar with Starbound shortly after starting up. There is a much more robust character creation tool, allowing for customization of race, gender, traits, and even personality (which determines stance and gait). Then, players are thrust into the narrative, drifting in orbit above an unknown planet on a spaceship that is out of fuel. After collecting what little resources are available, players teleport down to the planet, and the adventure begins.

Despite being set in the future, where technology allows for interstellar travel and teleportation, Starbound begins with mostly primitive items and goals. There is a futuristic multi-tool that can be used to dig through the ground, fell trees, and move items from one point to another. Importantly, while it can do most of the things a space colonist would want to do, it does its work very slowly. So the first thing a new player will typically do is take down a tree or two for lumber, excavate some stone, and put them together to craft stone tools, which have more specialized functions, but work much more quickly.

At this point, the engine driving the early game reveals itself: mine for precious metals, chop down trees, build better tools, weapons, armor, and shelter. Use those things to find even better materials. Survive. All the while, the overarching narrative is looming: players must find fuel for their ship in order to continue exploring the galaxy. 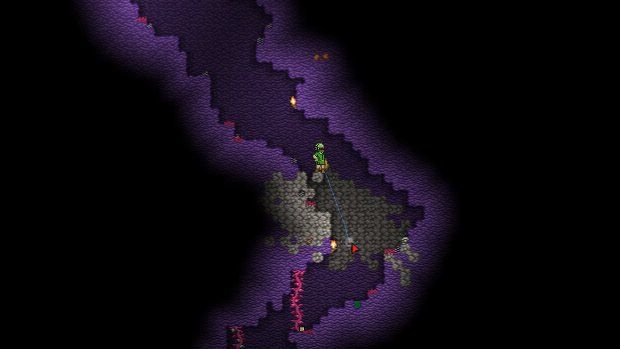 A few new systems throw a bit of a wrench into things. In addition to having to worry about health and oxygen, hunger and temperature are now factors to consider as well. To stave off hunger, players can kill alien creatures with a hunting bow to harvest meat or take to farming wheat and corn. For warmth, characters need only to stand near a heat source during the night. At first, the new systems seem like slightly annoying, unnecessary additions, but they contribute to the idea that Starbound is not just a game about mining. It is a game about survival.

Speaking of indigenous protein sources, the procedural creature generation is pretty robust. It features bipeds, quadrupeds, flyers, and swimmers of all sorts of shapes, sizes, colors, and temperaments. While many have basic melee attacks, I have seen more exotic creatures with acid-projectiles or control over electricity. More interesting is that not all of the alien fauna is hostile; some creatures will happily coexist with colonists, as long as they are not attacked first.

When players do get around to mining and building, a few noticeable upgrades stick out. Pickaxes now work by default over a three-by-three area of blocks instead of on one block at a time. Placing blocks to build structures is done four at a time. Both of these operations can be modified to work on single blocks for fine operations, but in their default modes they make some of the more tedious portions go much more quickly. Another tweak is that building materials are not separated into foreground and background blocks; a left click will place a block in the front and a right click will place it in back. It sounds like a small thing, but it is just one example of elegant design streamlining some of the more mundane aspects of sandbox games. 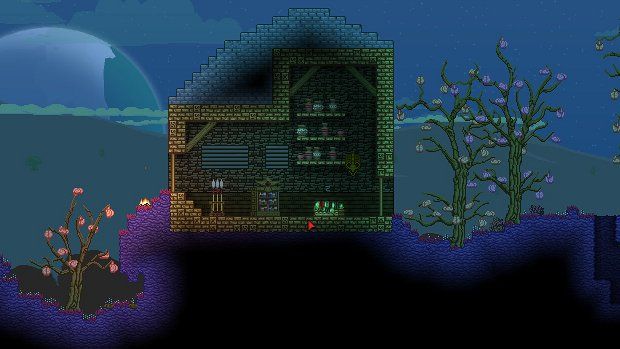 Another welcome addition for newcomers is the inclusion of missions to lead players in the right direction. While Terraria has a progression of events, it is often difficult to determine and even completely miss-able for those not looking in the right places. The first thing Starbound does is give instructions on how to get started through its missions, guiding new players through the early game without being too intrusive for veterans.

Graphically, Starbound is impressive. While it maintains a chunky pixel look similar to Terraria‘s, the animations are much more detailed. Weapons swing more stylishly and creatures interact more realistically with the environment. Trees sway and topple instead of just exploding into crafting material. In addition to the standard day/night cycle, weather effects like rain and lightning make the planets of Starbound feel more real than Terraria‘s single world.

With countless worlds with unique biomes and wildlife, each ready to be explored and colonized, Starbound‘s scope is incredible. After hours of playing, I have only seen a small fraction of the planets I have visited, and there are still thousands more left to explore. There is content I know exists — dungeons, villages, vehicles, boss fights, and more — but have not yet experienced personally. This game is enormous, and I have barely even scratched the surface. 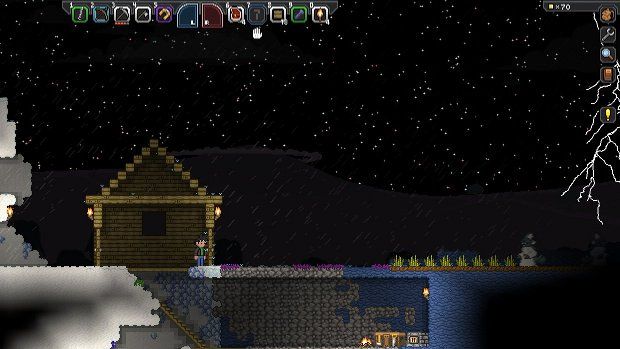 Unfortunately, the scope of the game has kept it in development for a bit longer than expected. Currently, Starbound is available to play in Stage One of the beta, which is visibly missing content and has its fair share of bugs. Most are harmless, though I have been stuck on the ship before, unable to teleport down to a planet. Worse yet, the current stage of the beta has seen a number of character wipes; though these were made well known by Chucklefish, it still stings a bit to have hours of progress erased. Thankfully, we can expect just one more character wipe before Stage Two of the beta begins.

My time with Starbound has been breathtaking. Adding space travel into Terraria would have been an ambitious enough goal for most studios, and an exciting enough idea for fans, but Chucklefish has gone so far above and beyond with Starbound that it makes me feel tiny. There is no way for any one person to find all there is to find in the deepest reaches of outer space. Though I will visit dozens, perhaps hundreds of planets in the coming months, I can only dream about the untold stories on one of the thousands of planets that will never be visited. For a game about space exploration, that is the most perfect feeling it could impart.