PlayStation All-Stars Battle Royale struggles to remain relevant amidst today’s extremely competitive fighting game market. Although one can’t say the game has been a failure by any means of the word, it isn’t the breakout success Sony wanted it to be.

It’s a shame, because I actually really like the game, and still play it to this day. Let’s see if Sony can rejuvenate PlayStation All-Stars with two new characters and a new arena. 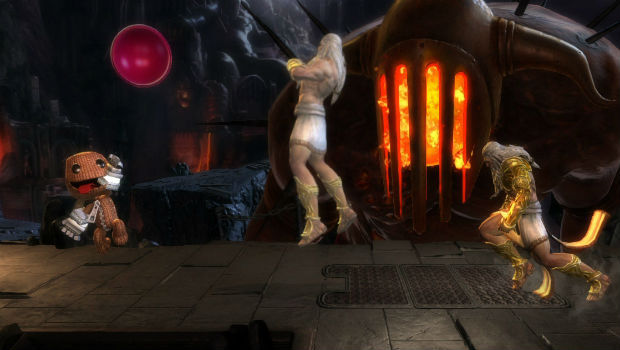 Zeus is basically Sony’s take on a Ganondorf clone. He’s slow, he hits deliberately, and he even has a few similar moves straight out of Link’s nemesis’ repertoire (he might as well shout “Olympian…PUNCH!”).

But he’s not a 1:1 clone, as Zeus has a few cool moves to set him apart from solely a melee experience. He has a few projectile attacks, a lightning shock AOE, and a neat move that channels his inner Dhalsim, that lets him clone himself to escape sticky situations. But really, that’s about it, as he’s mostly going to resort to slow punches outside of a pretty nifty and swift rising knee attack.

Outside of his level 3, his supers aren’t all that interesting either. After reaching maximum super bar, Zeus transforms into his giant, god-like form that you’ve probably seen in the God of War series before. In a unique game of rock, paper, scissors, Zeus can squish players below his giant hands with certain button presses.

Square smashes the left side of the screen, Circle to the right, and Triangle zaps the upper middle with lightning bolts. It’s one of the cooler ultimates in All-Stars, as it kind of feels like you’re fighting a boss while he’s doing it, and you’re not completely helpless.

The fact remains though, Zeus is mostly forgettable all around, unless you’re a huge fan of power characters. When you think “Sony franchises,” I’m sure a lot of you forgot that Zeus was even a part of the God of War series, but I’ve seen people online play with him successfully, so he’s not a waste of a spot for sure. 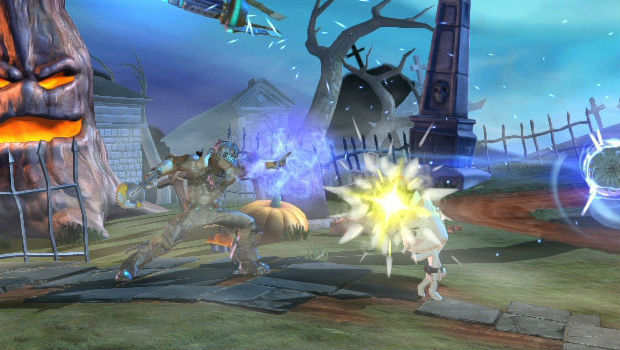 In a strange twist of fate, Isaac Clarke, a character that I would never associate with Sony, is now a part of the “All-Star” gang. Joking aside, what really matters is how the character plays, and I have to say, Isaac is easily one of the more fun additions to the game.

He’s got close combat (including his iconic stomp), projectiles, traps, zoning capabilities — you name it. Isaac is a fairly versatile character that can really surprise people, and play keep-away extremely well, which increases his usefulness in team battles.

His level 1 super is easily one of the best in All-Stars, as it can hit multiple foes, and is easy to combo into. Like a lot of characters, his AOE-based level 2 is hit or miss depending on how well your aim is (if you hit, it’s glorious), but you may want to skip right by it and go to his devastating level 3.

After reaching his ultimate, Isaac sucks everyone else out into space, forcing them to helplessly float around as he gets free reign to blast them away with his plasma cutter. You can easily get two rounds of kills here on each player if you’re quick and deliberate with your shots, but players do have a chance to juke you if you’re not attentive. Of course, if you play your cards right with his level 1, you’ll earn more than enough kills for a win.

Isaac is an extremely competitive character that can hang with the best of them, with a varied moveset to boot. If you’re a fan of projectile based play (or if Ratchet is one of your go-to characters), you need to add him to your roster. 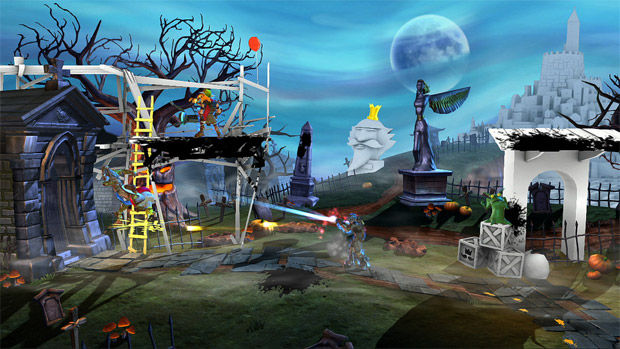 The new stage, Graveyard, is a mish-mash of MediEvil and The Unfinished Swan, and I’ll give it to you straight — it’s not a very good level. Essentially, what you see here is what you get — a very small playground that looks fairly unfinished, and doesn’t take advantage of the colorful, living (undead?) world of MediEvil.

Occasionally, ink blots will dab the screen to prove to you that it sort of resembles The Unfinished Swan‘s aesthetic design. But this cool effect is fleeting, and doesn’t really impact the game in any way. It could have been really neat if it took place in MediEvil‘s crypt or Hall of Heroes, with various champions of old shouting at you, and throwing in weapons — or something with more character to it. At best, it looks like they played the first few minutes of MediEvil and translated what they saw into his stage.

Considering the fact that there are a number of other “Final Destination” style vanilla arenas already, the fact that this is paid DLC is a shame, and I can’t even recommend the stage to fans of either franchise it features. 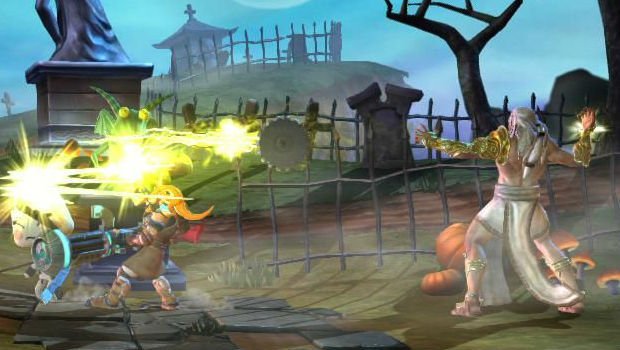 This odd couple double-team isn’t as interesting as the first round of character DLC, but depending on your style of play, these two might be worth picking up depending on your playstyle. While Zeus doesn’t really bring anything unique to the table, Isaac has a fun, varied set of attacks that make him a decent, if not mindblowing addition to the franchise.

But despite moderate success on the roster update, Sony really needs to work on creating memorable levels, as the Graveyard is one of the most generic arenas yet. It feels like their arena DLC so far is just churned out for the sake of it, which is not good if they want to propagate replay value. Ignore the two paid stages and just play them for free online when they’re queued up.