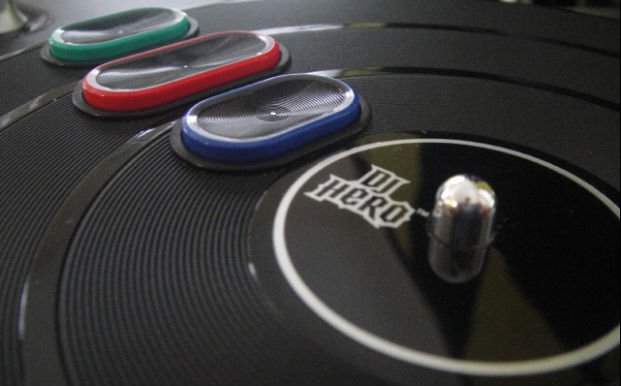 Yesterday, final DJ Hero hardware arrived in our Baltimore headquarters, along with a short demo of the title that should be playable at retailers this October.

While I’m going to have to spend more time with the demo (it’s only three “DJ-only” tracks, along with one “Guitar vs. DJ” song), I feel pretty comfortable talking about the game’s solid controller. I’ve gotten my hands on it before, but the benefit of getting some alone time with it allows me give a thorough inspection.

Hit the jump for images and details.

This sucker is a big, solid peripheral, but not nearly as large as your Guitar Hero drum kit or guitar, or even the Tony Hawk: Ride skateboard shipping this fall. You can easily slide this under your couch, or put it in a cabinet. It easily will fit on a coffee table, or in my case, those fold out tray tables my wife insists on keeping around. (They come in handy!)

It’s also lightweight, and breaks into two pieces (I’ll get to that a bit later), which should make it easier to carry from place to place than other music peripherals. 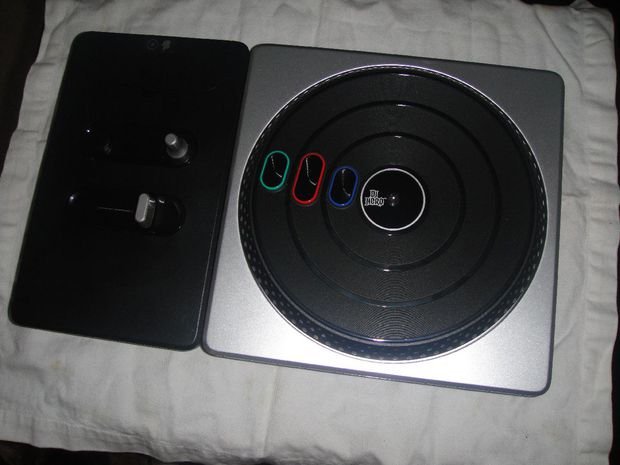 The platter itself spins a full 360 degrees, although only one mechanic in the game (rewinding a song a few measures to eke out a few extra points) requires it. Most of the time, you’ll simply be jogging or gently “scratching” it — there’s no real need to go wild and overdo it, as the game will pick up even the slightest scratch movements.

If you do want to get crazy on it and aren’t sure you’ll be able to control your hands, the buttons curve inwards, assuring a better grip while scratching. The platter itself is designed to look like vinyl, and is grooved like a record. The side of the platter has a silver pattern which acts as a grip for your thumb while scratching.

I also was able to take apart the turntable peripheral myself, something I’ve only seen done. You’ll want to do this for “lefty flip,” and it’s pretty simple. After releasing a lock on the bottom of the turntable, you simply pull apart the platter away from the other controls. (If it wasn’t obvious, it’s where the black and silver meet.) A cover on the otherside of the controls reveals connections, allow you to flip it around and reconnect it to the platter. (You’ll use that cover to hide the other set of exposed connections, to keep it sexy.) 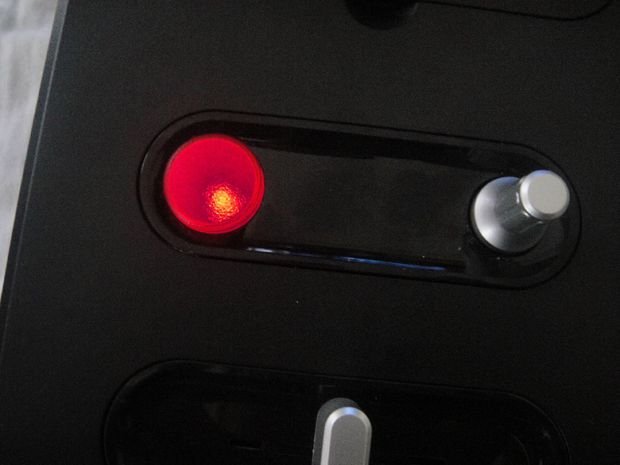 One thing I hadn’t noticed during my demos, and a surprising feature of the peripheral, is that the “Euphoria” button — what’s used to activate DJ Hero‘s version of Guitar Hero‘s “Star Power” — blinks red when it’s ready to activate. It’s not a particularly useful feature, as you’ll probably have your eyes on the screen most of the time. But that same screen can get cluttered, and it’s easy to lose track of your on-screen Europhia meter, a tiny sliver displayed on the left side of the spinning vinyl highway.

The retail DJ Hero demo is short, but I intend on spending more time with it before going into my impressions. Expect a more detailed write-up early next week. In the meantime, if you have any questions about the peripheral itself, let me know in the comments.