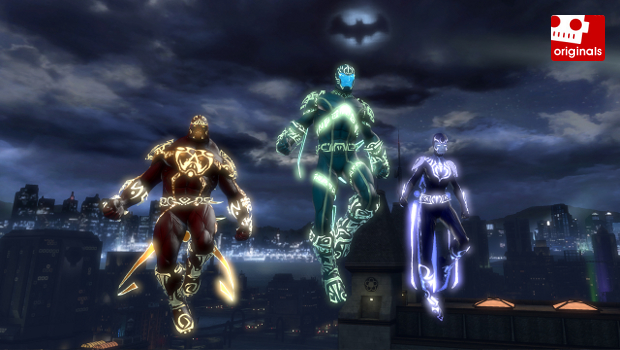 Earlier this week, I got to take a stroll through Gotham and Metropolis with DC Universe Online‘s creative director, Jens Andersen. Being shown off was the latest DLC, Hand of Fate, which introduces a whole bunch of new PvE and PvP content including utility belt upgrades, new Operations, and some additional Legends characters.

I donned my fetching tights, shrugged off the disappointment at not being able to use a flying hero, and got entirely lost in the Justice League’s massive Watchtower. It doesn’t matter how often I play the game, that place is still a bloody maze. Thankfully, I had a guide this time.

Hand of Fate sets up a magical war between the forces of good, headed up by helmet-wearing Doctor Fate, and the forces of evil, led by soul trader Felix Faust. Both gents should be familiar to anyone who has played DCUO, as they crop up quite frequently throughout the game.

Unlike a lot of the new missions and raids Sony Online Entertainment has introduced over the last year, villains and heroes will face entirely different foes and experience a different story. Six new Operations are available, three for the heroes and three for the villains. “Heroes and villains do not share content in this DLC. Previously, we’ve had some big bads that were not good for anybody were they to win — villains fighting Brainiac, for instance; sometimes heroes would take on enraged versions of other heroes. Players gave us feedback saying they wanted some more straight-up hero and straight-up villain content, so DLC 5 is really the first place where we did that since launch.”

Doctor Fate needed our help, so we headed over to his sanctum for a wee blether. The Operations have been split up into four-, six-, and eight-player; the one we were playing was designed for four, but being tough dudes, we tackled it as a two-man team. This really wouldn’t be possible normally. (Thank you, magical dev abilities.)

Upon reaching Doctor Fate, we were presented with a cutscene. SOE has now included players in the cutscenes and given them more cinematic animations; it’s a small thing, but it really went a long way to making me feel involved in the action and like I was actually playing as a member of the Justice League. Fate loves to scry — it might be his favorite hobby — so when he told us that he was going to get all mystic up in this place, it wasn’t surprising. We had to protect him from some particularly unfriendly souls as he attempted to divine what naughty shenanigans his nemesis Felix Faust was up to.

After defending Fate, we were sent away from Metropolis and had to head over to moody old Gotham. Although we were in an instanced zone in the previous battle, our heroic business in Gotham took place in the open PvE area. Some of the areas had just been opened up for the new DLC, but others will be familiar to anyone who has played the lower-level content. As we attempted to save the world, heroes and villains who weren’t involved in our operation could see us in action, and even help out.

According to Andersen, “The younger heroes and villains coming up are seeing what the veteran players are doing, kind of getting a taste of what’s to come, so there’s a lot of cross pollination and emergent gameplay happening as a result of that, both cooperatively and competitively.”

It’s a lot of fun seeing new places and traveling to new worlds and dimensions, but when you just get teleported there and it’s bereft of any other players besides your team it gets a bit lonely and feels disconnected from the rest of the game. These new Operations feel larger and more epic as you see them affect areas you’re already used to, while other players chip in and get involved. It also increases the risk of your team getting attacked by enemy players in the PvP server, heightening the intensity of these already tricky encounters.

Even if you’re playing in a larger eight-man Operation, teams don’t always have to stick together. The game lets players know when they have reached an area of a mission segment which doesn’t require a full team, so the supes can split up and tackle different foes. “You might have eight people in your group,” says Andersen, “but you don’t need to stick together to get this part of the content done. In fact, we encourage [that]. It’s to give players the idea that, hey, we don’t have to roll as eight people, we can actually split up just like the Justice League does to complete multiple objectives, or something that doesn’t need Superman’s power and Wonder Woman’s power and The Flash’s power…”

Eventually, we were led to Solomon Grundy (born on a Monday) who had become an unwitting pawn in Faust’s evil schemes. The undead behemoth gave us quite the fight, and the battle was noticed by lots of other players, both heroic and villainous. With the aid of our temporary chums, we managed to defeat Grundy and grab some lovely loot. I may have been crushed by rocks, smashed into buildings, and knocked unconscious, but at least I had some new shoes.

The new Runic gear is pretty flashy. The magical armor is covered in arcane script, hovering just around the clothing like a mystical hologram. Like all weapons and armor in DCUO, the Runic gear’s style becomes unlocked when you wear it, so should the stats not be what you are looking for, at least you can still look like a magical pimp while wearing your less dramatic togs.

Upon defeating one of the Operation’s tougher enemies, I looted a new item called a “missive.” These items extend the DLC’s storyline with sidequests. Unlike most missions, which just appear in the log the moment you are the appropriate level, you have to actually discover these drops before gaining access to this extra content. Getting these extra missions from fallen foes comes across as far more organic, and it turns them into rewards. It’s far more meaningful than getting a call from Superman just because you levelled up.

“Hand of Fate” also introduces two more characters to the Legends PvP roster, specifically Doctor Fate and Felix Faust. Both are magic-based handblaster combatants representing both heroes and villains. Unfortunately, I didn’t have time to take either of them for a spin.

The final addition is a greatly expanded utility belt. Players can upgrade their belt to include more slots for consumables, trinkets, and of course the random toys like the Kryptonian bouncy-ball. Being limited to one slot was always a pain in the arse, so while this may seem like a small addition, I found it to be pretty damn beneficial. To make things a little more interesting, slots have properties which only allow for certain items to be placed in them, but certain upgrades create wildcard slots which will be open for all items. It spreads out the content a little bit and gives a sense of progression; it’s much more favorable than just getting the utility belt upgrade once and leaving it at that.

There looks to be plenty of content for high-level players, but with DC Universe‘s open-world nature, newer characters can still get a taste of the action. While this DLC pack doesn’t come with a new powerset, the large array of Operations for both factions more than makes up for it. Hand of Fate is out now on PlayStation 3 and PC as a free download for Legendary players and $9.99 for Free and Premium players.