has been on my radar for quite some time now, albeit with some reservations. Any game that could reasonably be described as “Quantum Leap with assault weaponry and no Dean Stockwell” tends to have that sort of effect.

The premise is almost too good, too easy to screw up: your character travel through time to right chronological wrongs, relying primarily on era-specific weaponry and tactics (save for the occasional, anachronistic assault rifle rampage). As 8monkey labs released a remarkably long demo for the game yesterday, I finally got a chance to play out my most gratuitously violent Sam Beckett fantasies. My impressions can be found after the jump.

The demo comprises about 45 minutes of gameplay, starting at the battle of Little Bighorn and ending during the American Civil War. It’s undoubtedly one of the longest demos I’ve ever played, and may well represent the first hour or so of the actual game; your character is wounded at Custer’s Last Stand, taken into the future, instructed in gun usage on an Obligatory Weapons Training Course Helmed By A No-Nonsense Drill Sergeant With A Southern-ish Accent before getting some more exposition from an ominously-named character named “Mother,” who sends you straight into the Civil War.

The first thing you’ll notice about Darkest of Days is that 8monkey labs has done for Native Americans and Confederate troops what Valve did for zombies. At any given time, your screen may be filled with dozens and dozens of era-specific goombas, all of whom have the intelligence and health of a Common Infected from Left 4 Dead. The troops challenge you not through individual formidability, but through their sheer numbers. Sure, you can walk right up behind a group of Rebs without them ever noticing you’re there and shoot two or three of them before the others bother to turn around, but who cares? A hundred idiots with guns is still a hundred idiots with guns, and the game doesn’t feel any less difficult because of their intellectual difficulties. While you’re congratulating yourself for taking out two or three oblivious soldiers, another twenty will probably start shooting at your rear.

DoD‘s focus on era-specific weapons interested me more than anything else in the game. Games like The Battle Grounds have taught us that inaccurate, slow-loading weapons can still be fun if used in a strategic and honest way. That Darkest of Days might essentially fill an entire singleplayer game with similar mechanics excited me to no end. 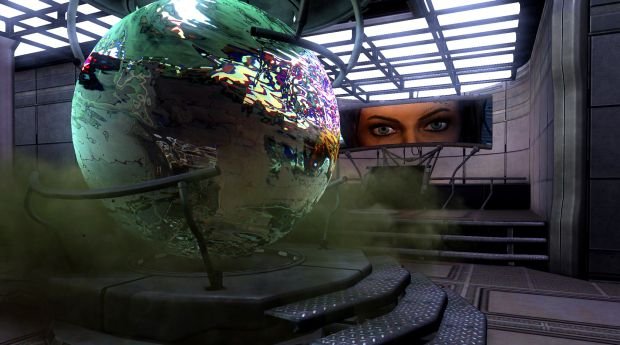 As it turns out, that’s not really what Darkest of Days is about.

The game still attempts to contrast the somewhat inefficient weapons of the past with the ridiculously over-the-top guns of the protagonist’s future, but the historical weapons are nowhere near as difficult to use as one might initially assume. Every gun fires with pinpoint accuracy, making firing speed and reload time the only real differences between a Civil War musket and a futuristic assault rifle. This is not necessarily a good or bad thing. I personally would have preferred the older guns to be a bit more unwieldy just for the sake of giving the shootemup gameplay a different feel, but the older weapons’ effectiveness prevents the game from feeling as frustrating or slow as it otherwise could have been.

Really, though, the Darkest of Days is about exactly one moment in one level, and it still works regardless of how useful the Civil War rifles may or may not be. After running from a group of Confederates and retreating into a barn, your character runs across the aforementioned Drill Sergeant, now clad in a Union soldiers’ outfit. He gives you the greatest gift you could ever hope to receive: a fully automatic, futuristic assault rifle. Hastily dropping your musket to the ground, you suddenly become a walking death machine. Entire regiments of Confederates suddenly fall to your fire as you carelessly spray the landscape with bullets. The same bastards you had to run from and aim carefully to kill can now be destroyed with a single, sustained pull of your machine gun’s trigger. The entire demo seems to build up to this sudden reversal of power, and even though it’d work much better if your previously-wielded guns were weaker and more inaccurate, the moment is still awfully satisfying in a hilariously over-the-top, grindhouse sort of way. Still, I worry how effective these power reversals will be when your default weapons aren’t very weak at all (a la the WWI machine pistol highlighted in the weapons trailer). 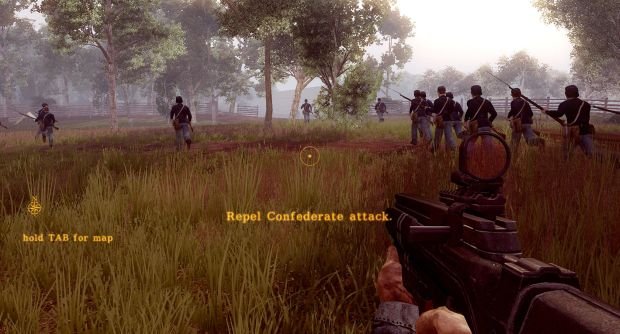 I also enjoyed the player’s ability to create paradoxes by killing soldiers necessary to the timeline (marked by a blue aura). Technically, you’re supposed to either knock these soldiers out or wound them, but I enjoyed the sudden change in pace that occurs when you take them out. Suddenly, time freezes, and a couple of futuristic dudes with powerful pistols warp into the world. These guys are much more well-armored and well-equipped than the grunts you typically go up against, which means two things: firstly, that you stand a greater chance of dying at the hands of characters who effectively feel like minibosses, and secondly, that if you kill them, then you suddenly have access to extremely power future-weaponry. I found it much more fun to treat the paradoxes as positive gameplay opportunities, rather than simple Bad Things You Should Never Activate Ever Because They’re Bad.

Overall, the demo impressed me. The game’s focus on moment-to-moment “fun” may undermine certain aspects of its design, and there’s a really weird moment at the beginning of the second stage where your character suddenly moves as if he’s on rails for no real reason, but the Darkest of Days demo nonetheless charmed me with its focus on Rambo-esque levels of slaughter and kinky paradox gameplay.