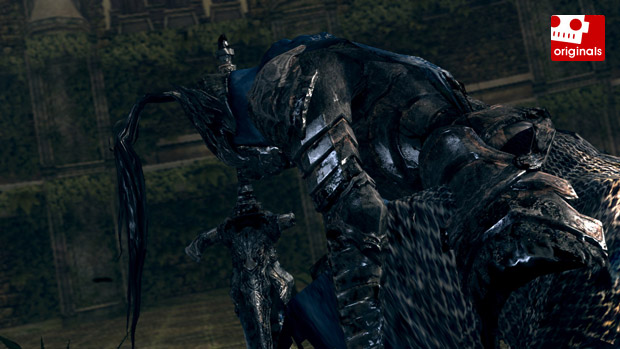 I played and loved Dark Souls on Xbox 360 originally, so I was keen to check it out again with the new Prepare to Die Edition that’s available now for PC via Steam and scheduled to hit Xbox 360 and PlayStation 3 on October 26, 2012. Beyond covering the port itself, I’ll go into my thoughts on the new content, Artorias of the Abyss, which is also headed to consoles as downloadable content.

As you will have likely heard by now, the PC version is locked at 30 frames per second and an internal resolution of 1024×720. So while you can go into the options menu and change the few things listed there (resolution, frequency, anti-aliasing, motion blur), the game is going to look blurry on even something like a standard 1920×1080 monitor. I can’t imagine how terrible it would get for those of you with displays running at higher resolutions.

Thankfully, a hobbyist named Durante quickly came up with a resolution fix that is both easy to implement and remarkably impactful. I’m not being hyperbolic when I say this person has made the game for me and presumably many other Dark Souls players. It’s simply mandatory.

Despite being a bare-bones port, the PC release of Dark Souls is the definitive version of the game. 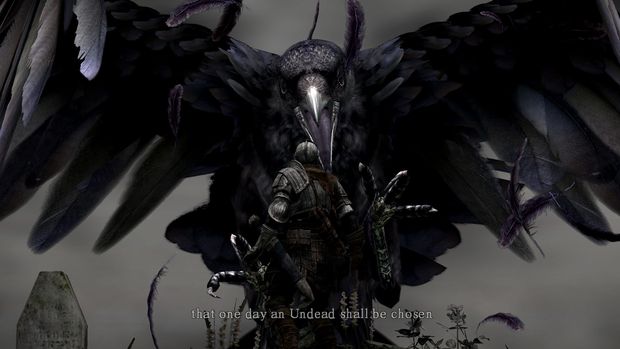 I’m not kidding when I say Dark Souls is muddy. In fact, I couldn’t even make it out of the tutorial area before I quit and started downloading Durante’s fix. I’m not one to usually care too much about graphics, but once you see the before-and-after shots, you’ll surely sympathize with me on this one.

For those who aren’t particularly experienced with using mods, this fix couldn’t be easier. Durante has some good documentation, so I’ll keep it brief. Basically, all you’ll need to do is download his files and place them in the folder where Prepare to Die Edition was installed. One of them is a text document that allows you to type in various things, such as the internal rendering resolution. Just like that, the game looks brilliant. That’s to say nothing of the other options he’s included, which are only expanding.

Most of my playthrough was spent with an earlier version of the fix (0.3, if I remember correctly) and then I eventually switched over to new versions. At the end of this post, you’ll find a gallery full of screenshots taken from my game (obligatory spoiler warning). You’ll notice that far-off environments are awfully pixelated and unattractive. This was one of my few complaints, but even it appears to have since been overcome with the newer fixes. To my knowledge, there weren’t any technical problems caused by implementing Durante’s work. Screw praising the sun — praise Durante.

As it turns out, From Software employs rather talented texture artists. With all of the user-made tweaks in place, their work really shines and Dark Souls looks more like the modern, beautiful game it deserves to be. Allow me to reiterate: playing the PC version with this stuff shouldn’t be considered optional. 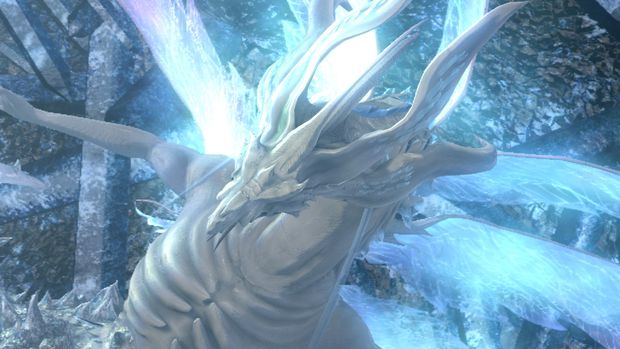 I hope you have an Xbox 360 controller

Because you’re going to need it, or a similar gamepad. At least, that was my experience. Dark Souls is designed as a console game, and although you can play it with a mouse and keyboard, you’d be doing yourself a disservice. Hell, they even have a message on the Steam landing page warning you as much.
It’s good to see that keys are remappable, but that’s about the nicest thing I can say here.

My main issue is with the camera, which is unwieldy. I ultimately gave up trying to fight with the game to make this control scheme work for me and happily played using a wired Xbox 360 controller for the 35 hours or so that ensued. If you don’t have one by now and are even a casual PC gamer, it’s about time you picked one up. Consider it part of the cost of playing Dark Souls, if you must. Still worth it! 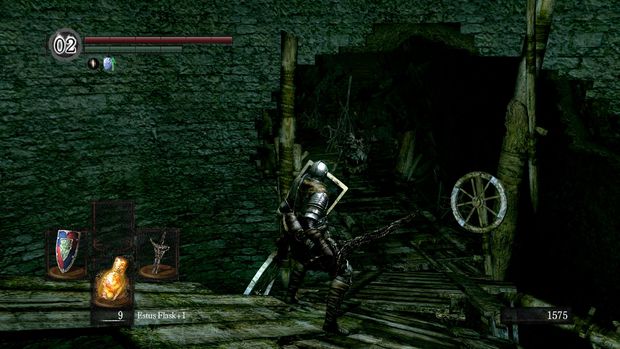 At a stable frame rate, Blighttown isn’t quite so bad

While probably not the worst area in Dark Souls (my vote is Tomb of the Giants — why’d they have to put a blacksmith near there?), the poisonous, vertical Blighttown is still strongly disliked by many. It’s certainly not something you look forward to pushing through, anyway. One of the major problems for this area on consoles was the low frame rate that would always seem to occur right on cue.

It is disappointing that the PC version is capped at 30 frames per second, but the good news here is that’s actually an improvement in practice. Even with the aforementioned fixes in place, I didn’t run into any noticeable frame drops outside of the boss fight with Sif, which temporarily got a little laggy but was still playable and certainly performed better than what I remember of the encounter on Xbox 360.

If you’ve played the game before, you know how huge a deal that is. Problem areas like Blighttown, the lower Undead Burg near the pile of burning corpses, and the Capra Demon fight weren’t an issue for me, in terms of frame rate. It’s worth noting that your mileage may vary — my PC specs are Intel i5-2500k @3.30 GHz, 8GB of RAM, GeForce GTX 580 GPU running in SLI — but I’ve heard that decent gaming PCs can run this at least as well as consoles could. That’s purely anecdotal, however. I’d recommend looking on the Steam forums and elsewhere if you’re genuinely concerned. 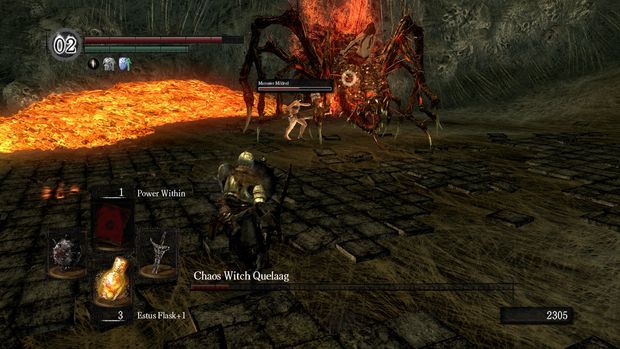 Perhaps my favorite aspect of Dark Souls — the ability to summon other players and invade their worlds, which nicely complements the brutal, cryptic setting of Lordran — is less than ideal here. The community seems pretty solid already (with the occasional follow-up “thank you” message on Games for Windows Live after a successful boss run), but “summoning failed” is all too common a sight.

Oddly enough, for the first half of my playthrough, I was getting invaded far more frequently than summoned into other players’ games. Far more than on Xbox 360, that’s for sure. I had a much harder time summoning others, with the majority of attempts failing in places like Anor Londo where you could really use the help. I’ve since had better luck, though; sometimes, after four or five failed attempts with a single player, it finally goes through.

I also encountered a bit of weirdness in my new game plus playthrough. Every so often, I’d get locked into an area as entrances and exits became blocked by fog gates. Presumably, this was someone unsuccessfully trying to invade my world, and it could go on for a few minutes at a time when it happened. Frustrating, but not game-breaking. I’m not sure if these are region-based issues, but hopefully as more people pick up Dark Souls, there will be a more diverse pool of potential players.

Artorias of the Abyss is included with Prepare to Die Edition and will also be released as downloadable content later this year for consoles. I couldn’t even find where to access it at first, which is probably a good thing — when I did finally go through, I was around level 85, and the boss encounters were still a nice challenge. While that was probably overkill, I’d recommend playing through most if not all of the core Dark Souls content leading up to the final boss fight before diving into Artorias of the Abyss. Besides, to even get to it, you’ll need to have access to the Duke’s Archives.

I’d like to avoid speaking about this new stuff too specifically, because it’s best to go in relatively blind — such is the way of Dark Souls — so I’ll try not to spoil anything major. That said, if you can’t figure out how to start it up, absolutely just do a Google search for “How to access Dark Souls DLC.” It’s a little convoluted at first.

The new area starts off looking like an extension of Darkroot Basin, though a less gloomy one at that. You begin almost immediately with a ferocious Manticore boss fight, and then you’ll be treated with a surprising amount of bonfires as you progress through this content. It’s all set apart from the core Dark Souls world not unlike how the Painted World of Ariamis is accessed.

From there, it isn’t long before you’ll come up against the Knight Artorias himself in an arena, which later houses the game’s new PvP matchmaking. While I couldn’t get a single match going (seemingly no one was playing at the same time as me), this boss fight was among my favorites. It’s simply an enjoyable duel that requires you to learn his moves (more so than others) to succeed. 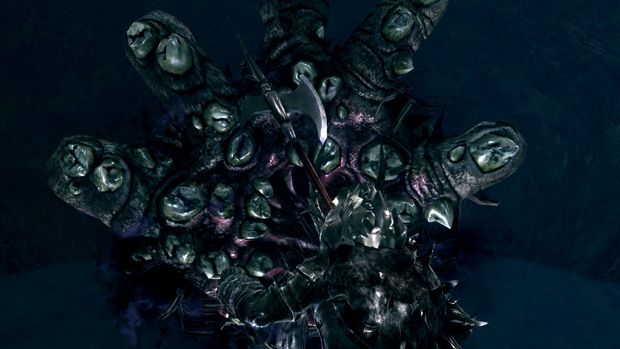 Eventually, you’ll come across a mostly abandoned town that is much more visually interesting than the preceding environments. The real highlight of Artorias of the Abyss is the new enemy designs, which include the township’s mutated citizens. This all works its way into the Chasm of the Abyss, a dark cave-like area reminiscent of Tomb of the Giants. Thankfully, it’s much easier to navigate, and there are plenty of elevators connecting all of the environments. Also, no nightmarish Giant Skeleton Dogs.

That said, expect to see lots of glowing eyes watching you down there. I won’t spoil the other new type of enemy, but know that they are really quite neat and serve as a great way to farm for Humanity. Once you finally reach the bottom, you’ll fight the boss of Artorias of the Abyss. I probably sound like a broken record here, but his design is my favorite of anything in Dark Souls. It’s that good.

Additionally, there is an optional fight with a dragon (hell yes!) that you can do once you’ve talked to a certain character. Best of all, it’s a proper fight in a vast, open area. If you’re going to take him on, I highly recommend that you summon someone to help. It’s a tough one to do alone.

While I think I had heard that Artorias of the Abyss would take around ten hours to complete, it’s actually going to be closer to 3-5 hours for many of you, depending on your level. Is it worth playing? Absolutely. The best compliment I can give is to say that it feels like a continuation of the on-disc content rather than something that was tacked on. Not only that, but it’s fairly challenging, too. 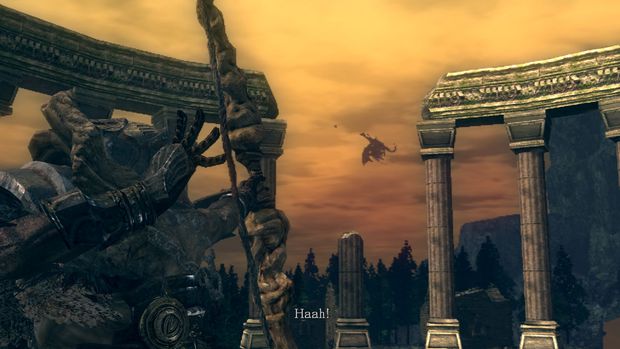 Is this version for me?

While this post was primarily written for people who are already mostly familiar with Dark Souls — read our review for more context, if you’re new — I’ll say, quite simply, you need to play Dark Souls if you haven’t already; preferably this version, if you have a capable PC and a gamepad.

While Prepare to Die Edition for consoles will be a compelling retail package, there’s no comparing it with this release once user-made tweaks and fixes are in place. It’s a whole new game, one that’s worth purchasing a second time. At a minimum, it’ll be worth it for you to check out the new Artorias of the Abyss content, no matter the platform.

It’s a real shame that I couldn’t experience the PvP arena, and that there are some technical issues with summoning and invading, but despite any of these setbacks, this is a great way to spend $39.99. As I said earlier, I played and loved Dark Souls on Xbox 360. Now, on PC, I’ve become obsessed with it.