When unreliable narration spills over

You may not recognize the title Immortals Fenyx Rising. Did you miss the name change? Did you know it as Gods and Monsters, from Ubisoft’s E3 2019 conference? Okay, well it got a name change that was allegedly due to a Monster Energy trademark dispute; but maybe wasn’t.

Yeah, this game is a little weird. Before it arrives in December as one of the last big titles of the year, we took it for a test drive thanks to the new Stadia demo. It’s…alright so far. 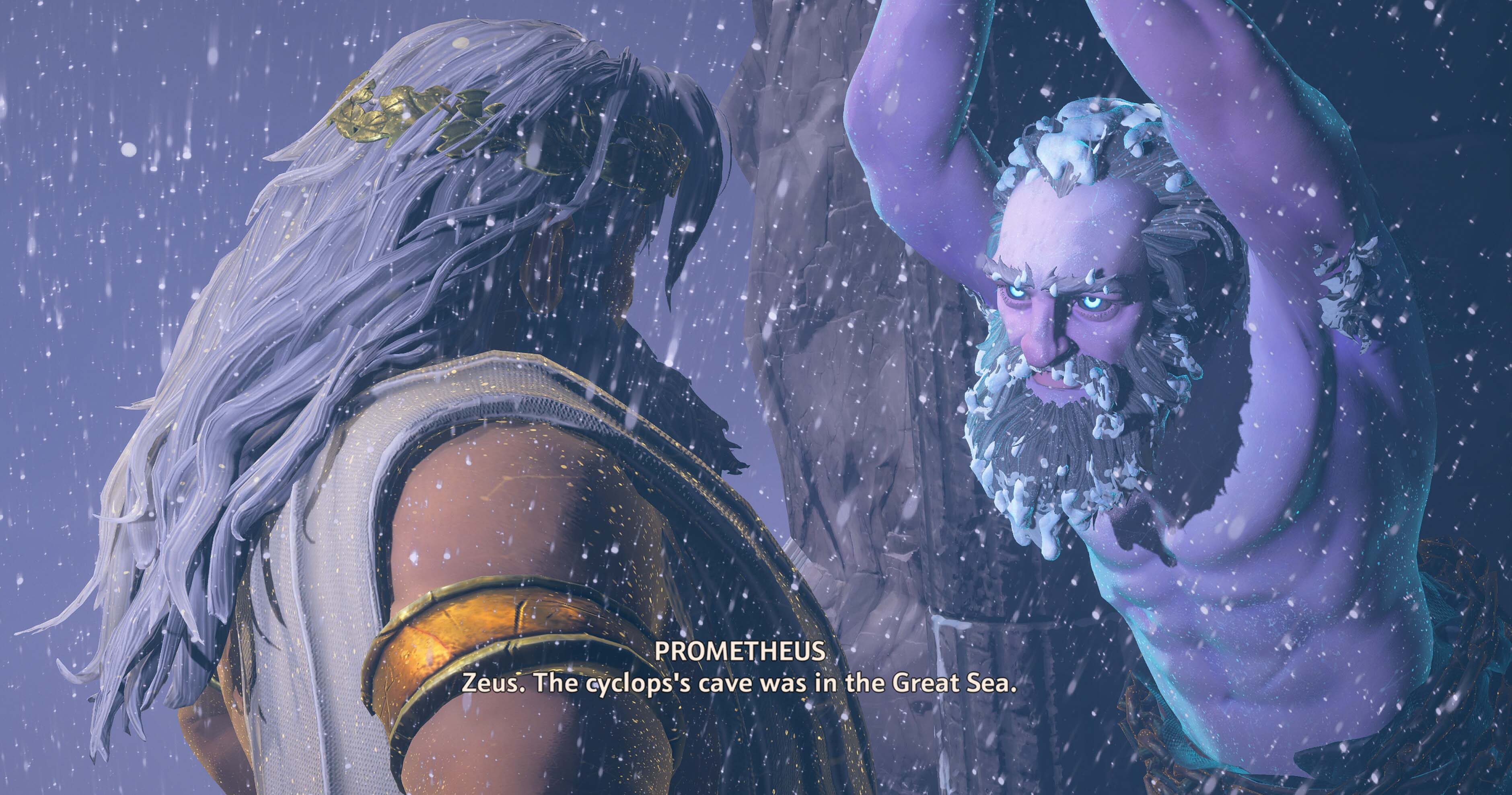 Since info on this one has been kept under wraps, I was surprised to see the incredibly light and carefree tone from the start. The framework involves the unreliable narration of Zeus telling the tale of the warrior Fenyx, who forcibly steals the show from the very reliable historian Prometheus: who is at the whim of the electric God of Gods.

While the theme is already fantastical, this allows Ubisoft Montreal to sort of bob and weave with the story to make it a little more exciting — but the script just isn’t there to match that witty conceit. Most of the jokes (which aren’t even “dad humor” good) didn’t land for me, which is a shame because you can clearly tell they’re going for a more comedic tone than say, the Assassin’s Creed series. It’s also (thus far) taking away from the ability for Fenyx herself to shine in any real capacity, with two dueling jokesters basically running the show. Hopefully it’ll evolve in the campaign.

There is a lot of intertwined DNA with AC, actually, in spite of the tonal shift. Combat feels like an arcadier Creed, with snappy dodges and attacks. I dig the ranged system, which allows our heroine Fenyx to fire quick shots that recharge on a cooldown (read: unlimited ammo) or via a player-guided Metal Gear Nikita mechanic. A parry system (L1+R1/LB+RB) opens up the chance for a more involved experience when swapping to tougher difficulties, as does the functional heavy attack that can knock enemies off their guard.

Special abilities — like a giant hammer slam or a thicket of spears that thrust up below Fenyx for crowd control — are cleverly tied to a recharging endurance/magic meter that winds Fenyx if they’re used too often. In what is one of several clear homages to Breath of the Wild, you can even manipulate objects with a yellow stasis ability for fun and profit. Locomotion follows a similar path, with one of the major focuses involving climbing very vertical regions and gliding through the air (which is governed by a stamina meter). It seems like there’s plenty of collectible goodies to uncover based on my limited access via the demo — and Fenyx Rising doesn’t look to go completely overboard with thousands of tiny pins like other bloated, similar titles. 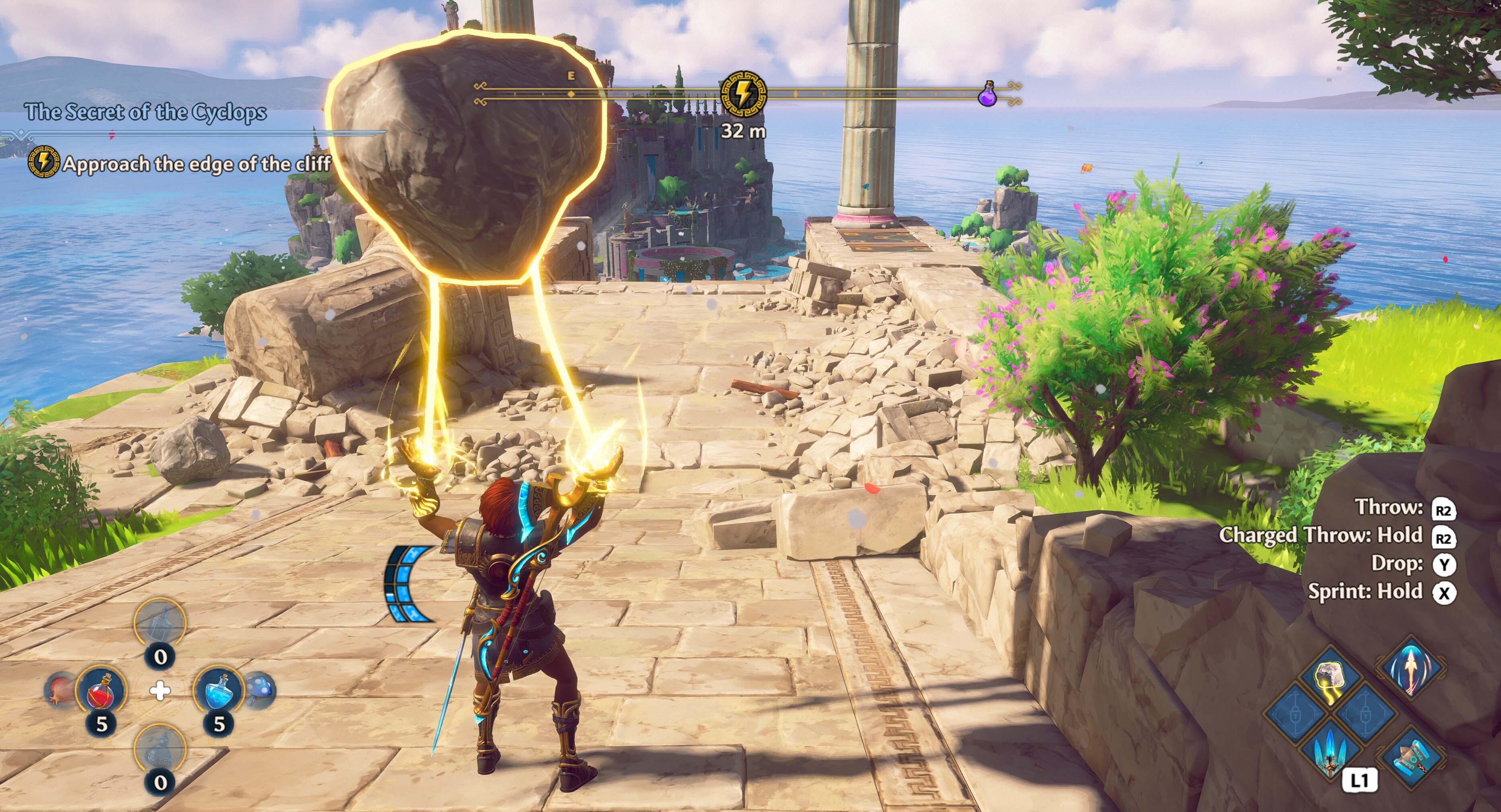 So far my more concerted problems with Immortals are skin-deep. A lot of the character models just look straight-up garish, and while the environments are lovely at a distance, upon closer inspection they start to look less impressive, like a structurally crumbling antiquity. As intimated above, the UI is also all over the place, with rough edges that could use a minimalistic second pass. That HUD, thankfully, can be customized, or turned off. I highly recommend tweaking it.

The physics system and controls are also a little wonky, and not because of Stadia. Sprinting is awkwardly tied to holding down the Square/X button (PlayStation/Xbox respectively), which doubles as your dodge. Object-based puzzles and clambering up walls also feel a little off: like items that should move a certain way aren’t as tightly bound. It’s annoying and can be fixed (ideally, before the live release). Speaking of Stadia, how does this version run? Fine, as usual! I didn’t encounter any major issues when playing the game on Stadia on my 100Mbps internet (1Gbps coming soon to prepare for the new consoles!).

While Gods and Monsters caught my eye as soon as it was announced, I’m a little worried about Fenyx Rising. So far the stage has been completely dominated by Zeus and Prometheus and there’s not nearly enough Fenyx. If Ubisoft can smooth over some unnecessary roughness, it should be a whimsical side dish after the main course of Valhalla.