Oculus’ most impressive showing yet

We’ve seen the Oculus Rift before in prototype form a couple of times before. The first time it was shown to me by game industry legend John Carmack, and it wasn’t much more than a ski mask with duct taped screens in it at the time. And earlier this year we saw an updated, cleaner version of the dev kit during CES. Now, here at GDC 2013, it’s a full-on development kit, with several improvements, running some pretty impressive demos.

The most impressive of the bunch had me piloting a mech in Hawken.

The newest version of the Oculus Rift development kit shown off today featured a 7-inch screen setup running at a resolution of 1280 x 800, with even more improvements to latency than when we saw it in January of this year at CES. After getting a bit of help to strap it to my head, I found myself inside the cockpit of a mech in Hawken, able to look up, down, and around freely to check out the interior of the cockpit. I was already impressed by the feeling of immersion though I had yet to take my first step.

In this demo build there was nothing in the way of a HUD, but I was too busy having fun flying around to care. With the view being directly attached to my head positioning, I was able to freely look around through the cockpit’s window at the surrounding world. Using the mech’s boosters to fly upward while having this freedom of view really added to the sense of flying. The Oculus team suggested that I fly as high as possible, and then look down as gravity took over after letting off the boosters.

I tried it. Woah! 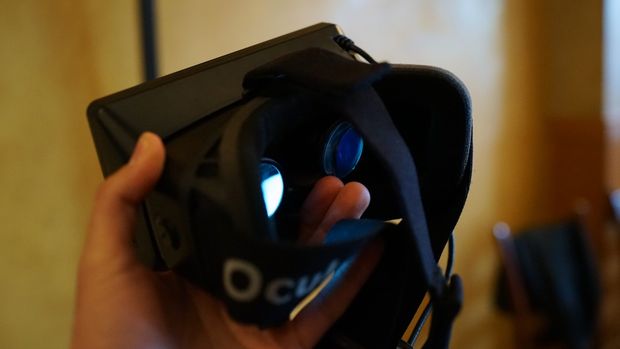 The feeling of trying this was so fun that I kept doing it over and over, so much so that I’m sure I was annoying the Oculus team members there. Have you ever tried riding the free-falling elevator ride Tower of Terror at Disneyland? Somehow flying high and then letting go in Hawken with the Oculus Rift on gave me a similar sensation. Looking around while falling, especially downward, made me a bit nervous. As I drew closer to the ground, I felt my stomach sort of catch, like I was bracing for impact — something I’ve never felt before in a videogame. All of the visual cues worked together to give a real sense of being in the cockpit of a falling mech. I’m afraid that words can’t convey how neat this was.

While I was supposedly out on a mission to kill enemy mechs, I couldn’t get over how fun it was to fly around. Hitting the boosters back on just before impact to blast off again had me feeling like I was really flying around in a massive robot, even with the demo unit’s limited resolution and mild distortion. What was key is that the tracking was spot-on, and the latency was low enough to not be noticable.

After mastering flying and navigation and actually playing Hawken a bit more, I moved onto a racing game demonstration that the Oculus team quickly threw together. It wasn’t much to look at, and the physics weren’t great, but it was fun to explore what a future racing game might feel like with the VR headset on. Being able to look into a turn by moving your head, or look up to check the rear view mirror was pretty interesting. Somehow plug this VR into Gran Turismo and I’m an instant customer. 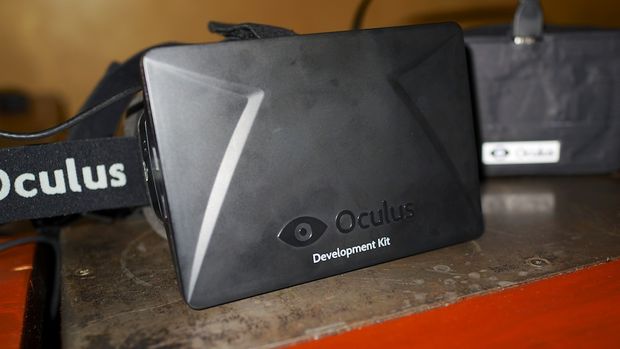 As impressive as this showing was, the team is still working to improve the tech for Oculus Rift. The team says they’re looking forward to trying out some of the newer HD and OLED screens for higher resolution use. And, as always, they’re working to get latency even lower.

They also stressed that all of their work will be worthless without more software partners. I think the Hawken demo was impressive enough to get people on board. Let’s hope some of the software developers here at GDC get a chance to try this demo out. Only good can come of it.