There aren’t a lot of good things to say about Konami these days. Its missteps over the past few years have been frequent and severe, including: the embarrassingly poor Silent Hill HD Collection; the cancellation of Silent Hills; several flubs with the Castlevania franchise; the acquisition and subsequent abandonment of the Hudson catalog of games; the tendency to ignore any of its intellectual proprieties other than Metal Gear; and now the termination of its working relationship with Metal Gear creator Hideo Kojima.

Looking out on the horizon for the publisher shows us a couple of glorified gambling machines and not much else. If I had just gotten into video games for the first time in 2015, I might wonder why anyone cares about the publisher at all.

I wouldn’t blame them for being unaware that for over 30 years, Konami played host to a style of game development that many other publishers wouldn’t dare touch. Trends in how the medium has grown in the last few years owe to how Konami used to make games. Indie titles to Odallus and Axiom Verge, AAA productions like The Last of Us and Mass Effect, owe a lot to how the publisher once went about defying convention. Konami used to stand for something special in the industry. Something I used to love.

There aren’t many video game characters from 1987 who are still relevant today. I’ve selected a few for your perusal below. See if you can pick out which one is not like the others. I’ve added a generic chart of realistic human proportions to help you guess the answer.

While not quite “realistic,” Castlevania‘s Simon Belmont is far and away the design who comes closest to following actual human proportions. He doesn’t rely on bright colors, baby proportions, expressive facial features, and other tools borrowed from the language of traditional hand drawn cartoons to win over the crowd. He’s an earnest attempt to harness the style of a classic action film hero and apply it to a video game.

Most of Konami’s games back in the late 1980s went for this style. While other publishers tried to tickle players with clownish antics, Konami titles like Gradius, Rush ‘N Attack, Castlevania, The Adventures of Bayou Billy, Contra, and Metal Gear rejected cuteness in favor of a feel that payed tribute to Hollywood action films of the day, though they often walked dangerously close towards the line between tribute and theft. It was common practice for Konami to “borrow” the visage of big name actors for the games. Sylvester Stallone, Arnold Schwarzenegger, Boris Karloff, Sean Connery, Kurt Russel and Mel Gibson are just a few of examples of big names who bear a strong resemblance to classic Konami characters. 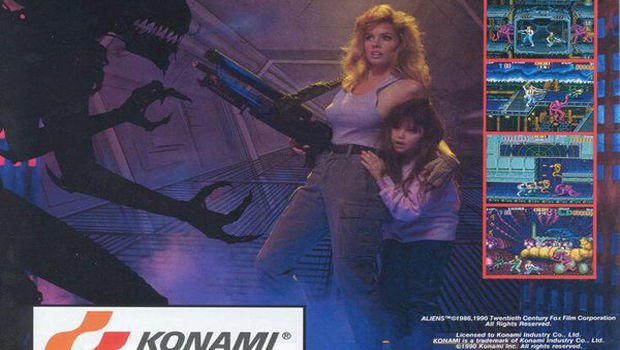 That kind of thing is pretty common in our modern world of games, with actual Hollywood actors (like TV heartthrob Norman Reedus) regularly lending their names, faces, and voices to AAA titles, but back in the 8-bit era, only Konami had the balls to consistently leap over tech limitations in an effort to deliver something more like an R-rated film. If the ESRB had existed back in the ’80s, chances are a few of Konami’s games would have flirted with an M rating.

While Konami may have worked to divorce itself from the cartoon mascots of ’80s gaming, it did not work to avoid video game logic. Castlevania payed tribute to the dark, intimidating worlds depicted in classic Universal monster films, but it also hid meat behind walls and implanted Valentine’s hearts inside of candles. Metal Gear combined James Bond‘s spy action with Rambo‘s lone soldier in a politically unstable world, but underneath that macho exterior, it’s basically Pac-Man with guns. It’s a game where characters may discuss the seriousness of World War III in one scene, only to have a large exclamation mark pop up above their heads in the next. That’s a tradition that the series has never let go of, and has gone on to be one of its defining characteristics. 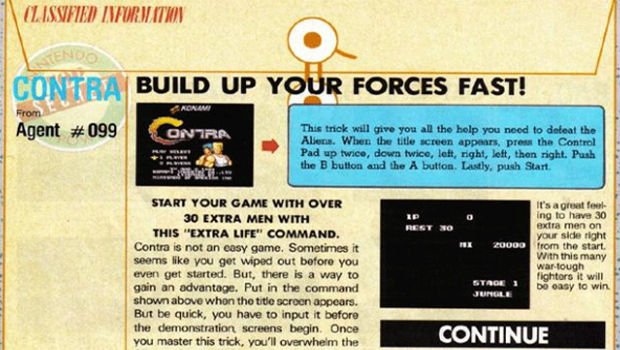 Playing off the tension between film and video game logic lived on in the Konami brand for over 30 years. The Silent Hill series centers around entering worlds that defy conventional reality, where subconscious thoughts and feelings fuse with the horrific and supernatural to create an environment that’s emotionally real but physically impossible.

At their heart, that’s what most video games are — worlds that feel real even though we know that they are not. Konami used to dart between realism and surrealism, symbolism and literalism, unplayable cinema and interactive gameplay, to create something larger than the sum of its parts. That interplay is the natural evolution of its old 1980s practice of depicting real life Hollywood icons with stripped down, iconographic sprites. It’s something we see so often in modern games that we may take it for granted, but if it weren’t for Konami working to pave the way, who knows where we’d be now.