Bullet hell games are meant to sort out the men from the boys. Their spray of projectiles are avoidable, but many. So much so, at times, we don’t know what to do other than move the spaceship into the nearest batch of newly-released firepower in the hope we can wing it and make it out the other side.

And then there are moments like level four of Ikaruga. A screen so busy with firepower and enemy drones, you don’t ask yourself “how can I avoid them?”, it’s much more “how many lives must I lose?” There are other moments of pure “WTF am I meant to do?” A boss on Sol-Feace, a Mega-CD shoot-em-up, became so notorious for its tentacled-death-inducement, that I had to cheat just to see the next level. For some reason, the rest of the game wasn’t that hard. These games are meant to place emphasis on survival and extra life management, and the developers draw an extremely fine line between life and death as possible.

So why aren’t we all like Topher Cantler, who takes these games with a glint in his eye? Why can only a few people manage to do what many others simply find (or feel is) impossible? However, rather than glorify what makes these uber-gamers appear so God-like, I prefer to take a different approach; by looking at what we are all stuck with.

The fact we only have one pair of eyes was very much a sound design. God indeed gave us two so that, in the event of one going down, we’d still be able to see out of the other. The idea of using each eyeball independently however must have been frowned upon a little. Yes, we can go cross-eyed, but we can’t see where we want to with them in their particular directions without looking stupid. And in the event of thinking of being able to use both eyes to scan in different directions is a good idea, take a look at the Lynx advert. Yes, you will look a complete, sweaty freak, rather than just sweaty.

The thing is, when playing a bullet hell game, you need to look out for, not just bullets and your own ship, but other things as well. In Ikaruga’s case, you need to look out, not only for enemy ships, but their colours as well, so that you’ll be able to plan what polarity bullets they’ll be firing in advance. There are so many things to keep an eye on, you need more eyes than are applied to your womb-knitted face. What’s worse is the fact that, like I’ve mentioned above, you can’t use both eyes independently, so you can’t focus in two places at the same time. You can focus on your spaceship and the things around it, but if you’ve got to look somewhere else on the screen, you have to move your eyes away from the shuttle/Ikaruga/avatar to what you need to see. You can move your eyes back to the spaceship, but there’s a fraction of a second of safety gone, literally in the blink of an eye. Captain Obvious this all may be, but I believe there are a few people out there who think when they look at the screen, they see all the action going on. This is a lie. When you have dozens, scores or even hundreds of projectiles all heading for your current location, it means the difference between ploughing on or losing a life.

This can be remedied by simply keeping an eye on the ship, but that’s not going to help you in the event of planning what you need to tackle outside of your eye range. Once again, by looking in the distance, you can take early evasive manoeuvres to avoid a hazard, but you risk danger from other angles by focusing in that direction.

This is very much a situation akin to what I call the ‘Linesman’s Dilemma’. An offside decision from a short pass is easy, because the linesman on a football (or soccer, sigh) touchline can rapidly move the eyes from the passed ball to appointed forward quickly enough. The dilemma comes with a long pass from one end of the field to the other; the linesman has to ‘guess’ whether the player at the same moment of the pass is in an offside position, because the ball and receiving forward are in two different fields of view. By the time the linesman has looked in both directions, the situation has already fractionally changed enough to force a guess from the linesman, rather than a certain answer. To take this information into a game with you is translated like this; you better pray that every decision is easy to make because in bullet hell and its ilk, it won’t be.

Another anatomical idea is to obtain more eyes to your head. Now, I can’t really find any real-life news/articles of experimental surgery to add eyes, although there has been an example of a successful effort to replace lost vision by applying the patient’s tooth to the affected area. That said, this may be quite a risk; the eye is linked to a cord, in turn linked to the brain. Somehow, if you want to try and get the desired result from whatever scalpel-based skulduggery is needed, you have to either ‘tap-in’ to the cable connecting your fragile ball of fluid to your grey cells, and/or require extra surgery to your brain to handle the extra eyeball or mental-camera. The first idea appears to me to be flawed, since we all know what happens if bandwidth is shared from a broadband line. And in the second part, you may need ‘proper’ brain training to stimulate the connections needed to use your new eye. Let’s face it; your dreams of becoming Pai from 3 x 3 Eyes or Tien from Dragonball seem far away to me. Or far-sighted, as the case may be.

Moving on from the eyes down that aforementioned cord, the brain is a wonderful thing. It is responsible for the many functions in our body that keep us alive, as well as allows us to do all the things we are doing now. Like a CPU in your PC. And most importantly, it can help store information, helping towards learning new experiences. Like memory in a PC. But only 5%-10% of our mind is used in its entire lifetime on average. What better instrument to put that 90%-plus of vacuous space than a bullet hell shoot-em-up?

So we put that learning to use. We memorise the levels and obstacles. The mind stores what enemies appear where and when. The yellowy-grey bit of jelly reminds you of where the weakness is on the boss early, as well as its patterns of attack. You still keep dying. All of this is still not enough. Is our brain incapable of masterminding a run through this most torturous of challenges? Not so. Otherwise, even the developers can’t finish the game.

Simply put, our training of our mind has to go to the next level. Quite often, our focus on the game in hand goes out the window when our grey matter alerts us to something that it believes requires attention. It could be an external issue, like a noise outside or parents calling you downstairs for dinner. It is also internal; how many times do we think about sex every minute? Is that the grumbling of your belly, putting the image of a piece of food to the forefront of your thoughts? Could it be that nagging feeling that you are sitting in an uncomfortable position? All that needs to be done is to try and block out all external distractions, whilst satisfying your internal urges. Physically, you can put on a pair of headphones, soundproof your room and have something to eat. I don’t, and also daren’t, have any suggestions on how to gratify those sexual urges. 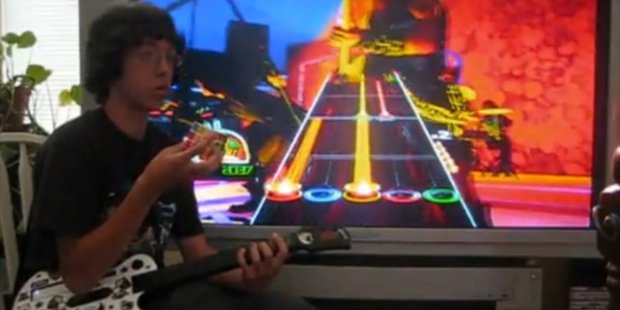 But still we are crap at a game that needs lightning fast reactions, and a brain to match. The simple thing is that in the game, there are so many things going on, we can only commit a certain amount of thought to the issues we can deal with, and ignore/deal later with the ones we can’t. Either that or get confused. You see, we can deal with multiple things going on at the same time; we just don’t know how many. Our ability to multitask looks so awkward on the surface; jamming that phone between ear and shoulder, talking whilst mixing with a whisk in one hand and a bowl of food in the other. However, we don’t take into consideration that we are breathing, thinking of responses to the conversation on the phone, and a few other things we are doing simultaneously. Add this to the metaphors used to describe the mind like a personal computer; there are programs running in the background of your actions. Shut some of them down, and you should operate smoother. However, we can’t turn off our most vital ones. This might happen…

You realise how important being able to remove those distractions earlier on are now? The less things on the mind, the more attention to the task at hand and the faster you can respond. That said, how do you respond? By operating the controls. But you need the brain to get the fingers and thumbs moving. You can’t guarantee you can get to the right button in time, but you can damn well practise. That small fraction of a second between thought and action matters. However, there is always the chance that you may hit the wrong button. Very unlikely after getting used to the games console joypad… but not with a keyboard. You don’t have a sleek ten-button bit of hard plastic in your hands, you have about 75+ buttons close together. One wrong digit press, and you’ve wasted that smart bomb you needed for later. Sure, you’ve got those little lifted marks on the ‘f’ and ‘j’ keys, but you’re using ‘wsad’ and ‘space bar’ most of the time. Remember, you’re concentrating on the screen, right? You badly want that third eye growing out of your forehead like some heavenly-blessed mutation, don’t you? Tough.

And that is why we suck. That is why I suck. Our bodies, our appendages or the lack of them, our physiological and mental processes all conspire against us. The developers suck too. They know this, so they make games that make all but a select few suck at. And until someone gives us the ability to suck less, when we’ve done all we can to suck as little as possible, we are going to keep sucking.