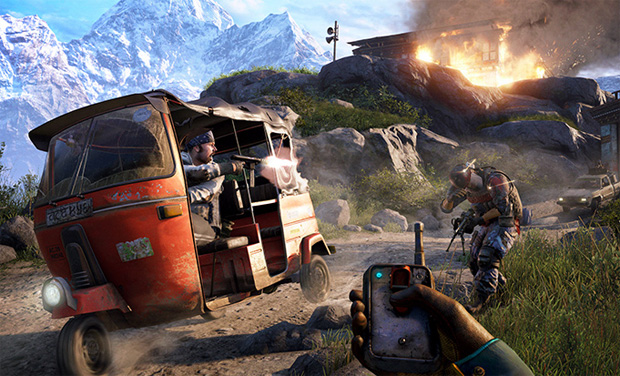 You all saw the gameplay footage of Far Cry 4, right? Well I got to play through the demo myself, specifically focused on taking over the outpost (now referred to as fortresses). We saw how to take it over from the sky at the press conference, but I decided to take things differently by riding a big elephant into battle.

The demo had us spawn right outside of the fortress gates, and I immediately hopped on the nearest elephant and had it ram right through the front door. I ran over the first couple of guards I saw, then jumped off and hid in a corner while my elephant went wild. The elephant will only attack whoever is attacking it. So it’ll remain your buddy until you inadvertently shoot the poor beast.

While that elephant was doing its thing, I was trying to explore all the new features of Far Cry 4 while I had the chance. I went up to a car on a hill and saw that you can now cut the breaks, and doing so will make the car immediately roll down the hill. You’re damn right I filled it up with C4.

Next I used some throwing knives to take out guards silently. I got spotted being too overzealous with the knives, so I used my big old MG and sawed-off shotgun to deal with the ever growing amount of guards coming in.

Then I found it. The big beautiful semi-auto grenade launcher. It’s exactly as it sounds. Just be careful in your rage lust as I quickly ended getting killed, partly because I opened up the weapon wheel by accident and selected the meat bait. Yeah you can lure predators to you with meat now.

After my hands-on time I learned a little more about the sharing system that’s going to appear on the PS4 and PS3. You can invite your friends on PSN to help you play the game in co-op even if they don’t own a copy of the game. This system as I learned will be limited in some sort through a ticketing system. Exact specifics weren’t given, but it sounds like you’ll be able to share the game with a handful of people, over say all 100+ people on your friends list.

Far Cry 4 is building on Far Cry 3, and expanding on it in all sorts of ways. I’m excited for more, but until then I really enjoyed what I got to play.