This kusoge will teach you how to close your eyes and tell yourself, “This just isn’t happening to me”

Licensed games are sort of a low-hanging fruit in terms of kusoge, and I have no shame in picking them. They have always, always been hit or miss. You either get a developer that loves the property and tries to do it justice, or you get someone that’s just cranking games out of contractual obligation. That’s why, on one hand, we have Batman on the NES, which is awesome, while on the other hand, we have Predator on the NES, which is the video game equivalent of drinking a warm glass of garbage water.

Then there are these games that are in between. They’re not horrible, someone on the team obviously had some affection for the license, but somewhere along the line, something was lacking. Maybe it was talent, maybe it was vision, or maybe it was corporate meddling. The Tick on SNES and Genesis is one such game. It’s not completely bad at first glean, but dig too far beneath the frosting on top, and you wind up eating sand. 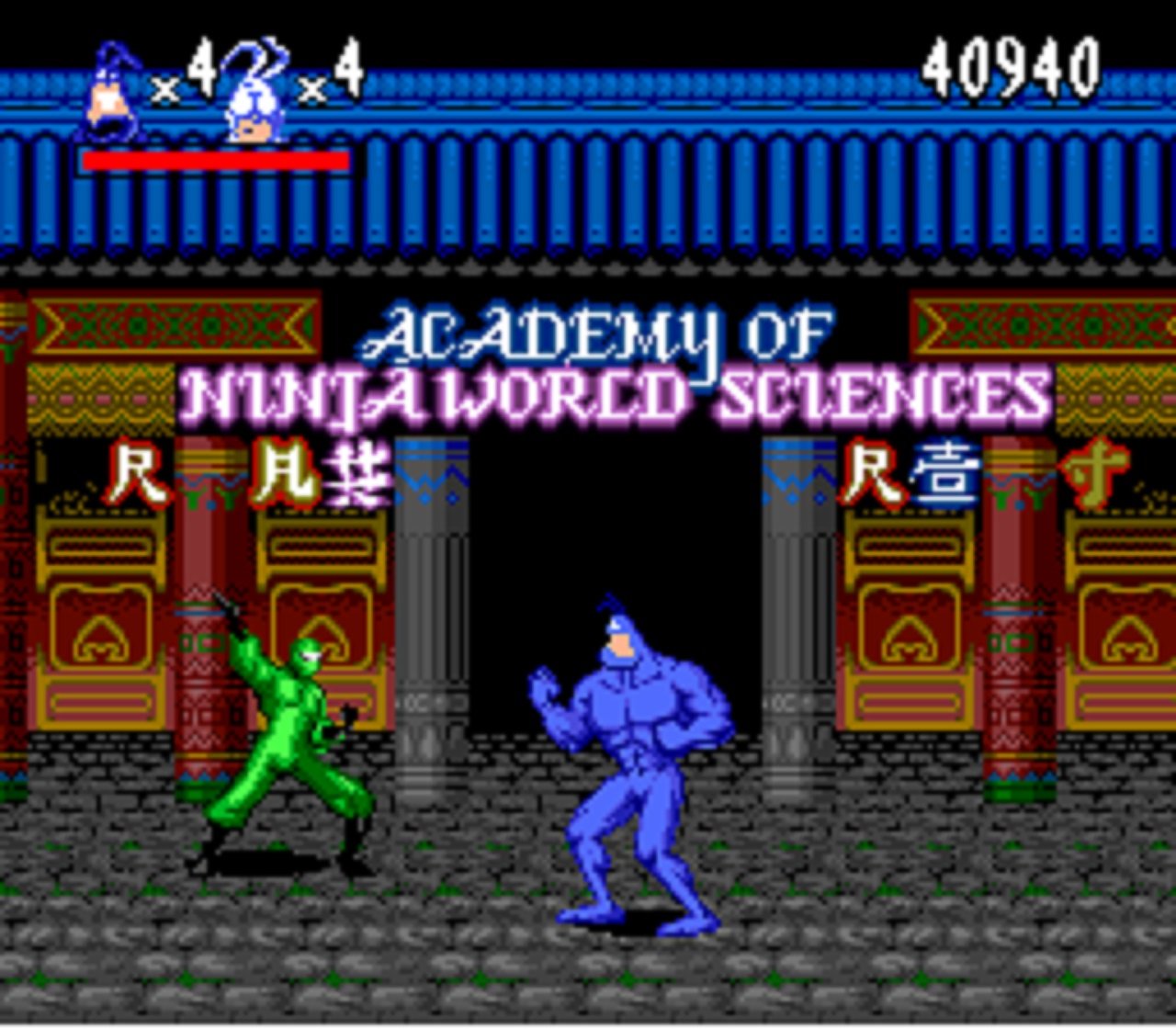 I’m a big fan of The Tick. I’ve read the Ben Edlund comics, watched the cartoon, watched the live-action series, and watched the other live-action series. I watched it as a child, and it had an even bigger impact when I re-experienced it in my young adulthood. It’s an excellent super-hero parody, shedding light on the genre’s more ridiculous aspects using endearing characters.

The video game is a beat-’em-up. I don’t know, it makes sense to me. What else would it be? The titular character is big and nigh-invulnerable; he has limited options for conflict resolution. The subject matter is sandwiched somewhere between the ‘90s cartoon and the Edlund comics, which is a bit awkward. The ‘90s cartoon had some success, but the comic is a little niche. So that means you might not recognize Chainsaw Vigilante, the Caped Wonder, or Paul the Samurai.

When I say that it’s a beat-’em-up, I mean that it’s a conveyor belt style similar to Final Fight. Where it differs is that it has some straight side-scrolling levels, a sort-of interesting buddy power-up system, and that’s about it. There’s no multi-player, which is a bit of a drag since I love my co-op beat-’em-ups. It’s also a bit weird because The Tick is rarely a solo super-hero. 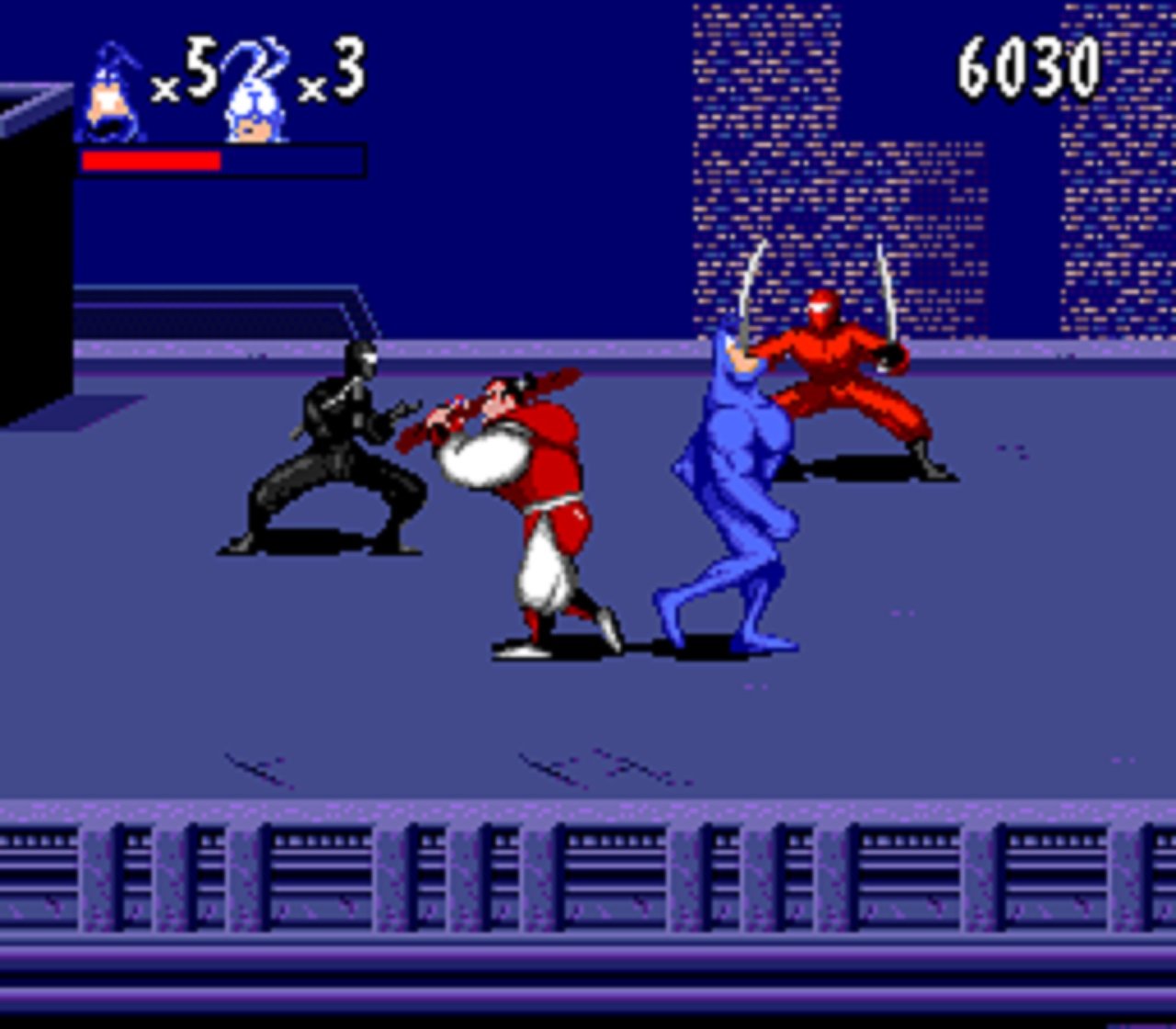 At this point, you may be wondering what is so bad about this game. If it’s a generic beat-’em-up featuring characters I love, that should be a shrug at the very least, right? Let me ask you something: What is the appropriate length for a conveyor belt beat-’em-up? If you think about games like Final Fight, Streets of Rage, or Double Dragon, you’ll likely arrive at the answer of 1-3 hours. Maybe less. Long enough to fit an obligatory elevator level in there and that’s about it.

The Tick took me somewhere in the realm of 6 hours to complete, and it has nowhere near enough content to back that runtime up.

It starts out promisingly enough. There’s a decent variety in the backgrounds and the gameplay style changes itself out just enough to keep things interesting between levels. However, it doesn’t take long before you realize its levels are just a bit too lengthy. Then you’ll find they’re a bit too samey. Then you’ll understand you didn’t actually survive that plane crash and now you’re in hell.

I hope you either really love or really hate ninjas because you’re going to beat the crap out of a lot of them. Different colors of them in slightly different flavors, sure, but so many of them. Granted, maybe in the Teenage Mutant Ninja Turtles arcade games you fought an awful lot of Foot Clan, but they threw in some robots for good measure. Here, you’re stuck with ninjas until it switches to multi-colored Idea Men. Then it’s clowns, which, I mean, could be ideal or a complete nightmare if you’re a coulrophobe. Finally, you wind up fighting aliens which, I don’t know, to me they look a bit phallic. I’ll leave you to decide whether that’s just a figment of my filthy mind. 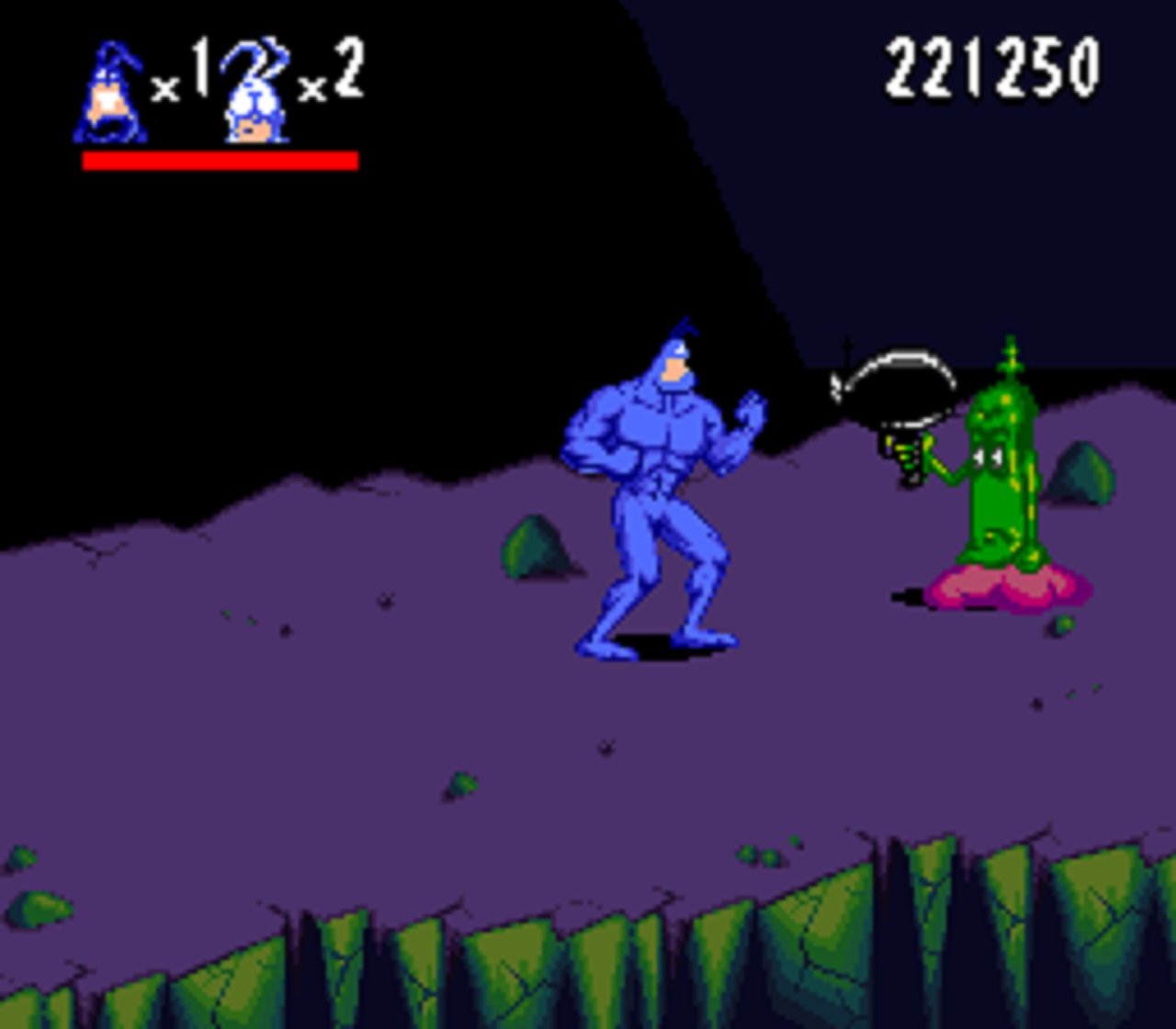 If there’s one place the game shows mercy, it’s towards the end. While the ninjas and the Idea Men seem to never stop coming, the clowns show up for fewer levels and the aliens fewer than that. The game also does throw in new set pieces throughout its runtime so it’s not completely the same thing the whole way through. It’s just that all the unique aspects get buried under fighting identical enemies on city streets. The music isn’t terrible. It gets kind of repetitive, sticking to the same jazzy sound that the show adopted, but it’s listenable.

Also, if you’re a fan of the series, you’ll be delighted to see a lot of cameos. This includes the aforementioned ones from the comics, but also American Maid, Sewer Urchin, and Die Fledermaus from the cartoon. Many of them arrive when you grab a power-up that puts you back-to-back with another hero. It’s not the most exciting mechanic, but it helps break up the monotony and showcases the other characters.

The game does throw the odd boss at you, but they’re so sporadic and their design is just absolutely frustrating. For some reason, you can’t combo them, so the whole fight boils down to feeding them one attack at a time until they stop getting back up. It’s bizarre design, completely removing the feeling of impact from the battle and reducing it to a slap fight. I’m honestly gobsmacked by how bad these fights are. 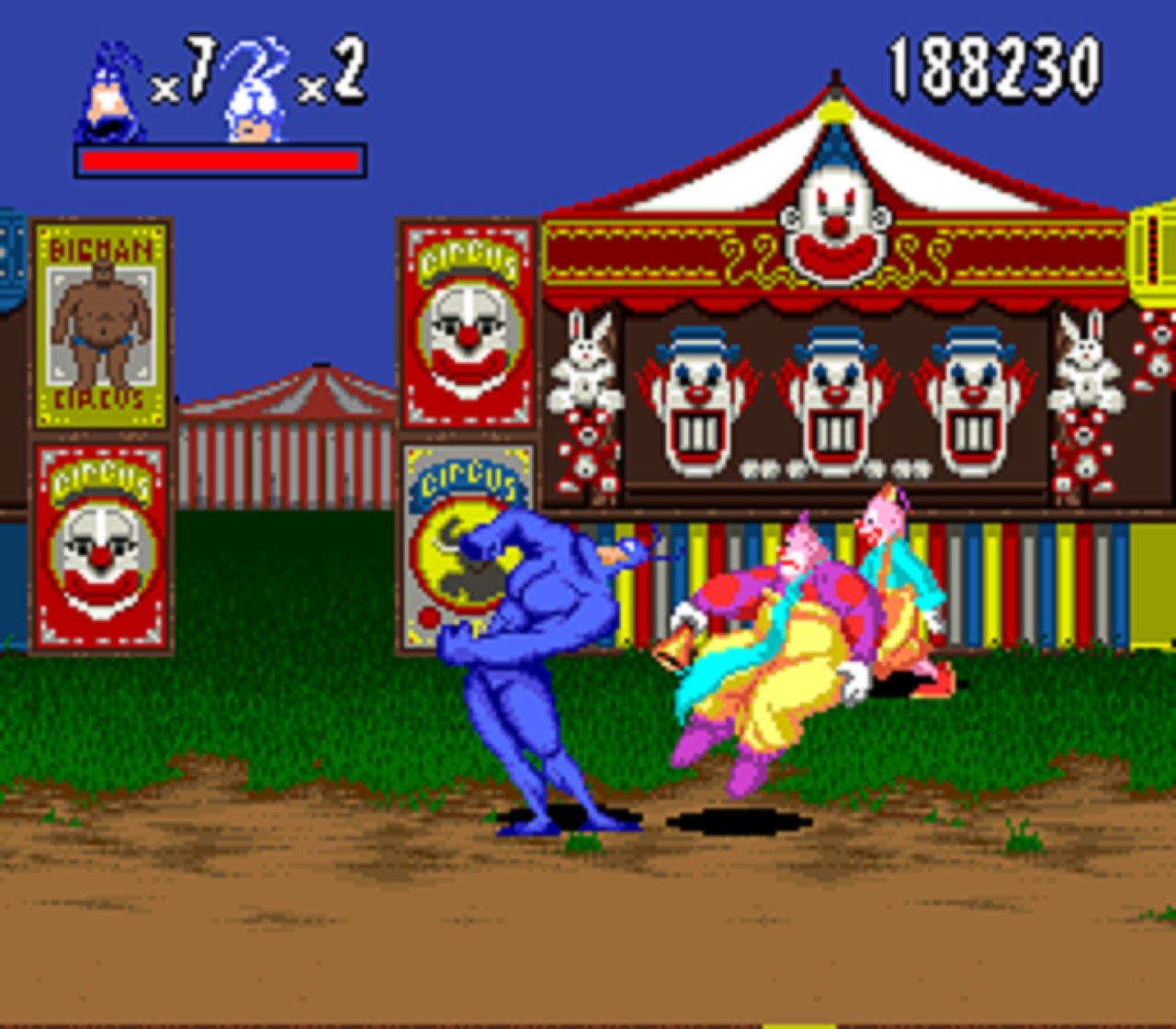 It’s perhaps notable that this game was developed by Software Creations, the same developer behind Carmageddon 64. I swear I didn’t plan this. I’m just as surprised as you are.

You may be asking if a game that’s mediocre can truly be kusoge. I’m not sure, I don’t make the laws here. However, I would ask you to try something for me: see if you have the patience to make it past the ninja levels. If you succeed, tell me how you feel.

If too much of a good thing can be a bad thing, The Tick demonstrates what too much of a mediocre thing can be: it’s excruciating. It’s like a Groundhog Day scenario where every time you leave your high school math class, you walk right into the same high school math class. It’s like being trapped in a dentist’s waiting room for hours and all they have is fifteen of the same issue of People Magazine. Eventually, you just start to look forward to the incoming pain of reality because anything is better than another few hours of being doused in inanity.