His trait makes him a ‘raid boss’

The newly announced Varian and Ragnaros were both available to play at BlizzCon for Heroes of the Storm, but there was one clear winner.

Yep, the Firelord wins out, even if I think he’s a bit too overpowered for his own good and will need some tweaks before or directly after his launch. 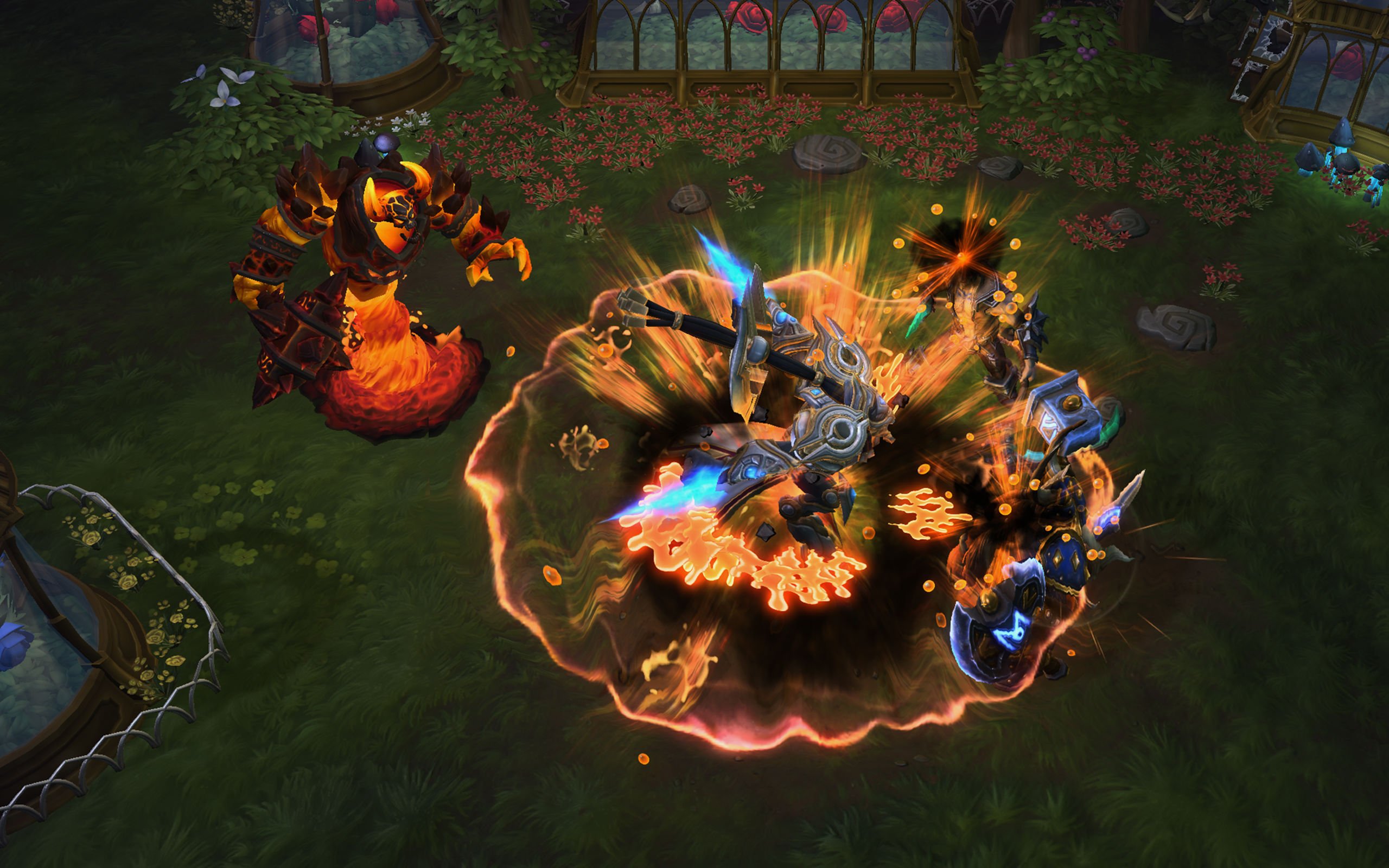 Hearing how Ragnaros came about, it makes sense why he’s so strong. As lead developer Dustin Browder discussed at the “State of the game” panel for Heroes of the Storm, the initial design for the character involved actually taking control of the core, and moving it around the map. That caused obvious issues, as did the concept of “summoning” him as a raid boss by playing as Majordomo Executus. All of these ideas didn’t end up being fun though, as you never truly got to play as Ragnaros, the character you picked to play in the first place. So they settled on having him take over forts and buildings, allowing him to grow to a giant size and become the raid boss concept he was meant to be.

In their attempt to make him cool as all getup, there’s some obvious issues afoot. Ragnaros is powerful inside and out, even if he never actually takes advantage of his fort-stealing trait. His Q makes his next basic attack stronger, and if you put talents into it, it can be a massive instant damage dealer as the match goes on. His W is a lot like Cho’s Rune Bomb, and can be directed before it’s thrown to roll over and dole out more damage. Finally, his E is a short speed burst and a delayed area-of-effect explosion that can add even more damage. If you mash all three, it can be devastating to single targets and groups.

But his ultimates get even wackier. While one is a short delayed area-of-effect that can hit an entire team, his lava wave ultimate — the clear-cut winner of the two — is insane. After choosing a lane, a gigantic literal wave of lava will roll out from your core all the way down the lane to the enemy core. It won’t deal structure damage, but will instantly kill minion waves (sometimes it can hit up to three!), and deal significant damage to enemy heroes. It’s slow moving and the enemy team can see it coming, but it can also be used to cleverly deny zones and prevent an opposing team from initiating.

For example, I was pushing up to the core on the bottom by myself with two mercenary squads, and my teammates were pushing top. I sent out a lava wave on the bottom when someone rotated down to meet me, and they had to momentarily retreat to avoid it, while my mercs took the Keep. This is while I was attacking the entire time and the wave was clearing out minions behind its wake. Oh, and at level 20 you can get two charges of it, and lower its 80-second cooldown by 10 seconds. It’s just as absurd as it sounds.

His real gimmick/game-changer though is his “raid boss trait.” He can take over a fort or keep (which includes downed and enemy structures!), and grow into it, becoming a stationary force with a new set of skills — a giant swing, a meteor storm, and another delayed area-of-effect rune blast. It’s very situational and can be countered (stay out of his range and pick him off), but it’s also a great way to prevent enemy waves from taking your structures.

This all sounds fun as hell, right? It is. But I noticed that my Ragnaros game went much quicker than my Varian test, mostly because I steamrolled the enemy team, even though I took the complete DPS build for Varian. This former vanilla World of Warcraft raid boss is just that good. And that should make a lot of his fans really happy (one more Warcraft III hero is in, the circle is almost complete!) — but it’ll make a lot of people less jazzed if he comes out and rocks the winrate charts like Samuro has.

All of that remains to be seen, but I’d expect some changes before he actually goes live, which is “soon,” after Varian makes his splash. Thoughts on him will be arriving soon too, and based on my time with him, he’s a lot more balanced than his evil counterpart.