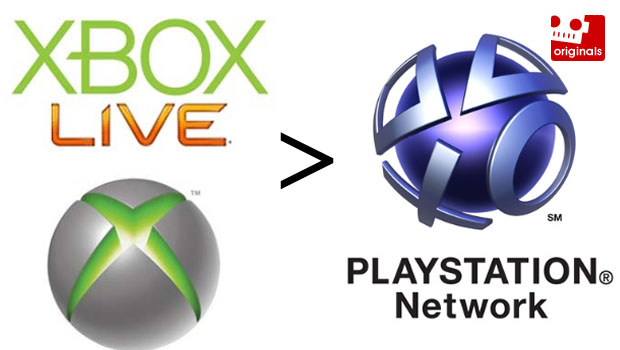 Since medieval times, humanity has debated, argued, and sometimes even fought over the eternal question — which company is better, Sony or Microsoft? Angry diatribes have been written and blood has been spilled, but neither man nor beast have found the answer.

However, each side can score points in less encompassing criteria, and it is on these smaller battlefields that the war is being waged in earnest. One of the greatest war zones, the realm of online services, is the most hard-fought, but it’s clear who is winning — Microsoft. Yes, Xbox Live is blatantly better than PlayStation Network.

If you don’t believe me, you better shut your stupid mouth before I slap it off your gormless face. I have facts backing me up, you little idiot. What have you got? Sit down, shut up, and listen to the truth that’s literally growing out of my head like hair.

You get what you pay for

One argument held against Xbox Live is the fact that you have to pay a subscription fee for its services. However, fools who argue this as a negative against Microsoft are but whimsical court jesters in the throne room of my mind, tittering brainlessly without realizing they are making my point for me. Yes, you pay for Xbox Live, but that’s because you pay for quality.

Things that we pay for are always going to be better. I don’t trust something that somebody’s just willing to give me. It’s like sex — am I going to go with the professional sex provider who does this for a living and expects a fair wage, or am I going to choose some amateur who’s doing it for free and could literally have anything inside those pants? I will spend dollars for quality, and that’s why I will only have sex that I pay for. Likewise, I will only have sex if I’ve been paid. It’s called the economy, dumbass! Look it up in a book sometime.

Paying for Xbox Live just proves it’s better than the oafish PSN, which clearly has no respect for itself if it’ll give us stuff without a charge.

If you’re unconvinced by my sound argument above, remember that you’re not just paying to play videogames online, you tramp. Microsoft believes in value and entertainment, and that’s why when you pay for Xbox Live, you also get access to unique and exclusive social networking tools like Twitbook and that website Jesse Eisenberg made.

Before we had Xbox Live, we could only access these features by using our unreliable cellphones or by purchasing and installing expensive, complicated personal computers. Who in the name of Billy St. Fuck wants to go through all the effort of spending $5,000 on a computer and hooking it up to a dangerous Internet full of Trojan Worms and Spyruses? As for cellphones, they sometimes are slow and have a short battery life, which makes them terrible for sharing that hilarious news story about Ron Paul saying something racist.

Then there are top-notch video services like Netflix and Amazon Video, which are unavailable anywhere else. Screw the $60 annual charge, Microsoft! For that much stuff, I wish I could give you sixty bucks twice a day.

PSN got hacked once. Microsoft did not. Again, probably because we pay for Xbox Live, we can trust its security and know the service is able to afford a truly secure network that none of us ever need fear. To date, there have literally been NO reports (that I’ve seen) of anybody being harassed, attacked, conned, or otherwise inconvenienced by another person on Xbox Live (that I personally know).

This all goes back to the sex argument again. You have sex with just anybody, you will get cancer and other STIs. You pay for official sex, and you have a clean experience with seasoned pros. If you don’t want cancer, don’t use the PlayStation Network. It’s not rocket science, you hog!

If it weren’t for commercials, we would never know what kind of products were available to buy. Buying products stimulates the American Money, which in turn creates jobs, which give people cash to buy the products. Microsoft stimulates the economy by putting ad banners all over the service we’ve paid good money for, which is great because of businesses. What’s more, it’s essential for Microsoft — how else will it be able to provide great online gaming, as well as Twitter and Facebook, without revenue generated by advertising? There is no other way!

Meanwhile, the selfish Sony hoards the PlayStation 3 XMB for itself, not thinking about the millions of companies in the world that need to sell their products to consumers and have no reliable means of getting the information out there. It’s quite possible that Sony is trying to put every other company in the world out of business so that it’s the only one left, and that’s maybe what will happen if it continues to maintain radio silence on the so-called PlayStation Network.

Also, you have to wonder — without ads, how is Sony paying to keep its service running? Drugs. That’s what I think. I’ve got none of your “evidence” to back that assumption up, but do you have a better explanation? It’s definitely drugs, probably.

When you boot up your Xbox 360, what’s the first thing you want? That’s right, Coldplay music videos! Thanks to the efficient organization of Xbox Live, smart gamers are able to get first access to Coldplay videos, while those morons using a PS3 could spend all day looking for Coldplay videos and only find them by the time real gamers have finished watching all of the Coldplay videos. Just imagine all that Coldplay while your rivals on PSN (and they are rivals, all of them) are fumbling around like lost little lambs in an eternal nightfall of darkest black.

It’s not just Coldplay, of course! From television to sports to movies, everything’s been organized to keep you as far away from those distracting videogames as possible. No longer will you be tempted to waste your time on stupid games, because by the time you’ve scrolled toward them and discovered that you can watch the latest Vin Diesel movie right now, you’ll have something far more valuable on your to-do list.

Also, thank fuck you can’t find Xbox Live Indie Games without having to really dig for them. Those games are all terrible and the people who make them don’t need any encouragement.

Get Call of Duty maps first

Let me tell you a little story. It’s about a young boy named Michael. Michael was a fan of videogames and bought all the latest titles. His favorite game was Call of Duty, and all his friends played it as well. However, unlike his friends, Michael played Call of Duty on the PlayStation 3. At first, everything was fine. His friends played CoD on XBL, and he played CoD on PSN. They all were good friends, and talked often of their gaming experiences.

Then one day, something strange happened. One of Michael’s friends said, “Oh man, playing Call of Duty, the hit videogame from Activision, was great last night with the new map pack we bought.”

“What new map pack?” asked Michael. He had never heard of this.

“The new maps for Call of Duty, the biggest game of the year and available now in all good stores. Surely you downloaded them last night! We all did. We got them from Microsoft’s award-winning Xbox Live!”

“No,” replied Michael. “There were no maps on the PlayStation Network.”

“Oh my God,” said his ten-year-old friend. “Oh my fucking God. Are you serious?”

Michael looked horrified, realizing that he no longer could join in with his friends. The other boys glanced at each other nervously. One shifted on his feet uncomfortably. The lead boy looked Michael up and down with a sneer.

“I’m sorry Michael,” he said spitefully. “But you cannot be our friend anymore. It’s time we pulled your clothes off and kicked you naked through the village.”

And strip him they did. They pushed him to the ground, all eighteen of them, and tore at his pantaloons and tunic. They ripped the woven cloth from his back until he was naked and ashamed, and they spat at him and called him names like “beast-child” and “mother’s laundry.” They hoist him to his feet and took turns booting him on his bare bottom. Michael stumbled away, crying and red, but still they kicked him, all through the village, and sang of how he did not download the new map pack for Call of Duty. Lo, did the villagers laugh. Old Man Burns, the blacksmith. Grandulf, the apothecary. Even mayor Pompadour had a good old chuckle and pointed at Michael while calling him a “fucking prick.”

That night, Michael’s father hanged himself by the neck until he was dead, leaving a note that he was “cunting ashamed” of raising “that worthless fucking worm who played Call of Duty on PSN instead of XBL like a damn human being.”

And that is why you play games on Xbox Live.

What got that shitty underwater game once

Do you remember that time Microsoft made one XBLA game totally free of charge, for no reason at all? Such a level of generosity has never been seen before or since. After searching on Google multiple times, I found out it was called Undertow. Remember that game? I can’t believe Microsoft would just give us shit like that, but it’s yet another reason why Xbox Live is top banana.

Unlike the PlayStation Network, Xbox Live is American, and as such it enjoys all the benefits that America has to offer. Xbox Live stands for freedom, a strong work ethic, democracy, God, eagles, Obama, and justice. Meanwhile, PSN is not American, and as such does not stand for freedom or any of the other things I can’t be bothered to type out again. Also, it’s probably racist a little bit.

Let us not forget that Japan started World War II by bombing a place once and was also responsible for the physical assault of Kurt Russell, as filmed in the documentary Big Trouble in Little China. Kurt Russell, like Xbox Live, stands for the great American ideals, so an attack on him is practically an attack on The Lord’s chosen nation. Japan — and by extension Sony — may as well rub its ass on the American flag every time it gleefully runs Big Trouble in Little China on national television, which I’ll bet it does daily. Are you going to take that disrespect? Are you going to let Sony revel in the continued abuse of Kurt Russell and Xbox Live? Do you even LIKE freedom, or are you some fuckin’ communist who refuses to free Pussy Riot?