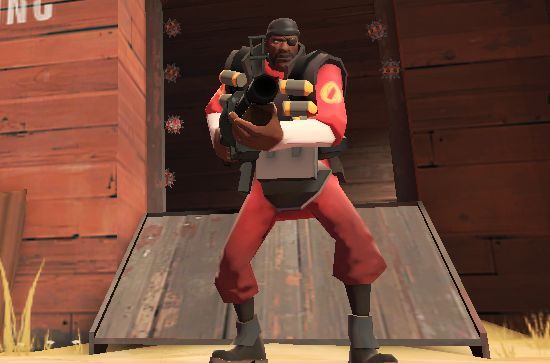 Hey, look — it’s part eight of ten in our series, “How to not look like an idiot in Team Fortress 2,” wherein we dispense advice of questionable worth and validity for each day leading up to the release of The Orange Box. Which, if you haven’t been paying attention, is in four days.

The Demoman is the only class in the game whose primary and secondary weapons can only deal indirect damage. He is also the only class whose taunt involves yelling loudly and showing his penis.

For the lowdown on how to properly play as, and easily defeat this unusual character, feel free to hit the jump.

[Special thanks to Andr3x for posing in the above screenshot.]

Your first few times playing as the Demoman, your immediate instinct will be to play him as if he were a slightly tweaked version of the Soldier. A few gruesome deaths and wasted grenades later, you’ll (hopefully) understand how useful — if finicky — indirect damage can be.

Firing your bouncy grenades through the windows of capture points is a fantastically effective way to kill enemies and their sentry guns, if done correctly. Bouncing grenades around corners, while only occasionally resulting in an actual kill, will sufficiently clear the area you’re trying to get through as enemies run away from your explosives (though be careful, as it also none-too-subtly announces your arrival). Arcing grenade shots over long distances can disorient enemies, as they are forced to pay attention to the arc and possible landing location of said grenade in an effort to avoid it. I’ve seen a few Demoman/Sniper combos where a Demoman lobbed a grenade into the air, aimed in the general direction of an Engineer; the Engineer was so busy trying to judge the trajectory of the grenade and avoid its landing point that he didn’t notice the Sniper who suddenly stepped out from cover and blew his face off.

Don’t try to use your grenades as rocket equivalents, though. While absolutely brutal if resulting in a direct hit, they’re slow and relatively easy to dodge at medium or long range (though close proximity and narrow hallways are an exception: more on that later). Leave the direct assaults to the Soldier; the Demoman is all about judging angles, and executing trick shots without directly exposing himself to enemy fire.

-Sticky bombs are not proximity mines

Named after my friend Jeff Axton who introduced it to me, the Axton comes into play when a faster combat class with effective short-range weaponry begins to chase a Demoman. I’m sure this strategy existed before Jeff discovered it, but I don’t care because I really like nicknaming concepts after my real-life friends.

Anyway, if you’re a Demoman and an enemy (let’s say a Pyro) is chasing you, do the following:

1. Face the enemy and backpedal

2. Fire a sticky bomb either directly at your legs or a few feet behind you

3. Continue to backpedal until the enemy, so incensed with the thought of your head on a plate, follows your path of movement and runs over the sticky bomb

Firing a sticky bomb near or behind your feet when you know an enemy will continue to follow you is useful because sticky bombs have a one or two second delay before they can be detonated; this is why firing sticky bombs directly at your target and then immediately trying to detonate them doesn’t really work. If you fire it at your feet and continue running, the one or two seconds it takes for the detonator to prime will be the exact amount of time it takes for your pursuer to run over your sticky bomb (unless he’s a Scout or something, in which case you just need to fire your sticky bomb further behind you).

If the first sticky bomb isn’t close enough to your enemy when it detonates and leaves him alive, you can easily repeat the Axton manuever; if your enemy is dumb, they’ll fall for it again and explode, and if they’re smart, they’ll be forced to change course and lose precious ground in their attempt to chase and kill you.

And screw you if you don’t like the ???/PROFIT meme. It happens to be one of my favorites.

Even the Scout’s acrobatics can’t help him in a narrow, enclosed hallway. Firing regular grenades down these babies when there’s an enemy trapped almost guarantees a kill; as there’s nowhere to go, your grenades will almost certainly hit your enemies directly, thus doing a hell of a lot of damage.

Unless someone comes up behind you and kills you, or unless an Ubercharged enemy comes bounding through that hallway, it will literally be almost impossible to pass through.

-Space out your grenade shots

Grenades are great and everything, but remember; you’ve only got four of them at a time. Unless you’re absolutely sure that your aim is true, don’t rapidly fire all of your grenades at once; after doing so, you’ll be depressingly defenseless. If you’re shooting grenades around corners and testing to see whether or not they hit their mark on a stationary character or object, think twice about firing all of them at once. If you’ve miscalculated and those grenades harmlessly detonate a few feet away from your target, then they’ll immediately know that you’re out of ammo and — if you’re smart — they’ll charge you.

-Respect the power of a hidden sticky bomb trap

Enough sticky bombs, if placed in close enough proximity in an inconspicuous area, will kill any class at any time, regardless of how many Medics are healing them (so long as they aren’t Ubercharged, anyway).

-On your side of a doorway an enemy will pass through, stuck to the wall in close enough proximity to said doorway that the enemy will be unable to see it with their peripheral vision

If you manage to hone your sticky bomb trapping skills, you can easily defeat Heavies (and possibly their medics) without even having to look at them. Additionally, placing a great number of sticky bombs in a Sniper nest essentially closes off an entire area to Snipers; they obviously can’t show their faces there for fear of being blown up, so you’ve essentially blocked off an entire area to them (unless they shoot the bombs away or you die, anyway).

-Stop activating your taunt so goddamned much

Seriously. It stopped being funny the eightieth time I heard it.

Firstly, if you see a great deal of sticky bombs blocking an area or capture point, that means that the Demo who set them is still alive. If you find and kill him, the sticky bombs automatically disappear.

As far as actually killing him goes, the Demoman is more difficult to defeat than most; he’s got decent HP, and thanks to his indirect fire capabilities he’ll likely spend the majority of his time out of your line of sight. Direct assault, therefore, is usually not the best course of action as it will usually force you to run through doorways or around corners to actually get the Demoman in your line of sight, at which point he will be able to fire numerous lethal grenades at you from close-range.

Taking on a Demoman, no matter what class you are, presents some serious risk. A Heavy without a Medic can hypothetically kill a Demoman before dying himself, but a few poorly-aimed bullets are really all it takes for the Demoman to score enough direct hits with his bounce grenades to gib you. Pyros can torch the Demomen to death if they’re lucky, but it’s also pretty easy for a Demoman to realize he is on fire, turn around, and then simply fire his bounce grenades at the Pyro who is attacking him, doing serious damage. If you are going to go Pyro, make sure to move around a lot after torching a Demoman to prevent him from drawing a bead on you.

Generally, you’re going to want to try to get the Demoman to waste his four bounce grenades on you while you’re at a distance, at which point he’ll either be forced to reload or switch to his sticky bombs, giving you the chance to go for the kill. Scouts are absolutely phenomenal for this, but they have to be extremely careful: one direct hit from a bounce grenade will take away the Scout’s meager amount of HP pretty damned quickly. Spies are also useful for killing Demomen, as Demomen don’t tend to consider themselves “high-priority” targets on par with Engineers, Snipers, or Heavies — in other words, they won’t watch their backs as much.

If a Demoman begins to do the Axton, stop chasing him in a straight line and opt to pursue him in a semicircle pattern, thus forcing the Demoman himself to change his path of retreat in order to complement your new movement pattern. As the Demoman will generally have to face you in order to pull off an Axton, try to change your direction as much as possible; if he has to keep his eye on you for long enough, he’ll eventually back into an immovable object and find himself trapped. Alternately, if he has to keep looking over his shoulder to make sure he doesn’t do this, that’s another few seconds he’s spent not watching you.

Engineers: Demomen live to destroy your sentry guns. The ease with which they can do so varies according to map (destroying sentries in the corner of the flag room on 2fort is a mite tricky), but if you find that they can lob grenades at your sentry gun without ever exposing themselves to it, you’re in trouble. If you’ve got a more assault-capable partner with you, send them after the Demoman while you repair your buildings. If you’re alone, forget the buildings and charge the Demoman yourself; you’ll lose your structures, but you’ll catch the Demoman off guard and stand a good chance of killing him if his ammo is relatively low. Staying with your sentry as he lobs grenades at it with impunity will only delay the inevitable; if nobody else stops the Demoman, your sentry will be destroyed anyway and he’ll have the time necessary to reload and charge you and almost certainly kill you.

As a Sniper, be careful: if you try to kill a Demoman, be ready to have numerous bounce grenades lobbed at you. It’s easy as hell to attack a Sniper as a Demoman thanks to the huge arcs on the grenades, and so they do it frequently. This brings a potential anti-Demoman strategy to mind: a Sniper stands in place on a battlement and draws the Demoman’s fire, hopefully depleting his ammo reserves. The split second after this happens, a Scout or a Soldier rushes out from hiding and engages the now-defenseless Demoman. Might require too much preparation to actually work on the frantic and unpredictable battlefield, but the theory is there.

Finally, remember that sticky bombs can be knocked off and rolled away by gunfire. If you’ve got a HW Guy around or a lot of time to spare, don’t hesitate to dislodge the sticky bombs with bullets and then shoot them to an area where they’ll be less troublesome. Additionally, don’t forget that you can tell which sticky bombs will deal critical damage due to the way they glow. Shoot these away first.