Platinum’s leading lady is due for a makeover

Bayonetta 1 & 2 were just released on Switch, which means that soon enough, Sega, Nintendo and Platinum will start rolling out more information on Cereza’s next big adventure. As for right now everything we know about the game comes from a brief announcement trailer from late last year. In my analysis of the video for Nintendo Force, I speculated that the teaser alluded to not only how the game would look, but how it would play. It shows an apparent Bayonetta doppelganger get split in half, all before seeing her iconic emblem being split down the middle in the shape of a “3”.

This imagery could be hinting at a story where two different Bayonettas (maybe from alternate timelines?), one modeled after Bayo’s red-themed outfit from her first game, and the other after her blue-tinted look from her second game, are literally and/or spiritually  split in two. These split witches would mirror the Switch’s split Joy Con controllers, allowing for color coordinated co-op play right out of the box. I also speculated that my two dads Bayonettas could fuse together to form one powered-up purple super sorceress, not unlike what you might see in modern day cartoon classics like Dragonball Z and Stephen Universe.

What might this totally unofficial, probably-not-actually-going-to-happen super-version of Bayonetta look like? With a collection of unused designs from the team at Platinum games, along with a bevy of fan art from across the internet, we’re here to make our best guesses. 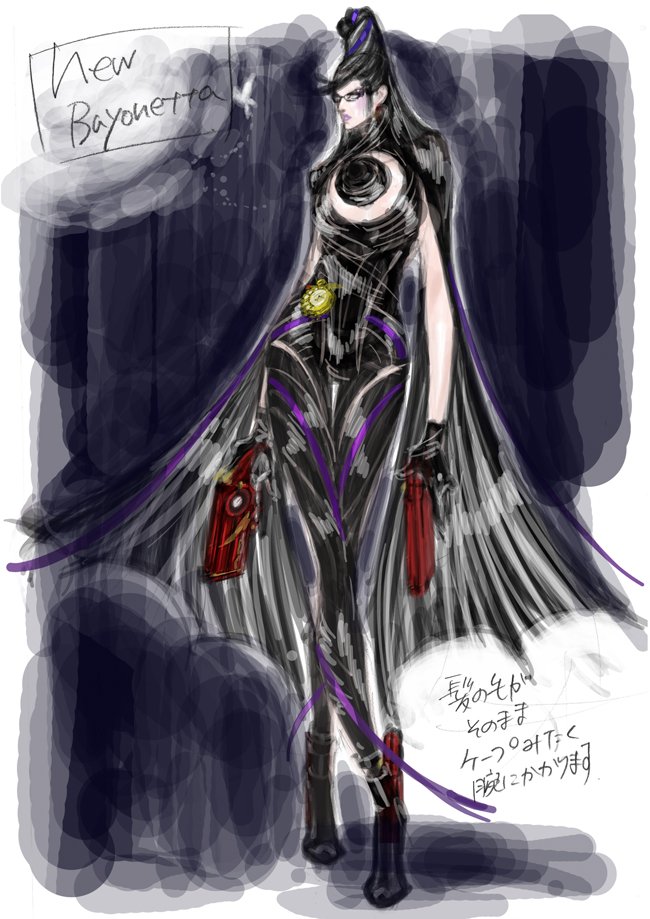 That’s one of the early drafts of Bayonetta’s debut look. You’ll notice how little her sexuality is emphasized in this phase of her creation. Instead, a focus on power without bulkiness, expressed through lines flowing through her clothes and around her body, defines her overall look. Her accent color here is purple, which differs from the design Platinum ultimately went with, though the red guns and golden clock-like accessory both ended up making the final cut.

So from the very start, Bayonetta’s key color was purple, though in both of her currently released games, only some of her attacks and weapons share that color. This is all the more reason to guess that with Bayonetta 3, Platinum will finally go with a variation of the violent violet which they first envisioned all those years ago. 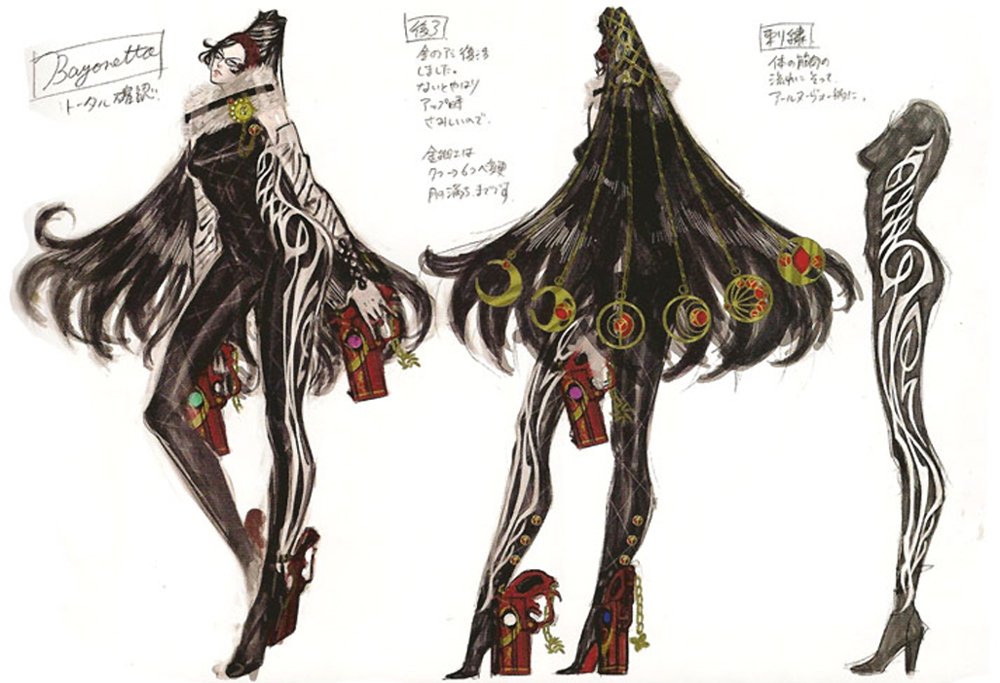 This design is from the Bayonetta beta that was never released for public play. You can see that the red has totally overtaken the purple from her previous design, and her body has taken on a more solid, overtly sexual look, but the lines used to express strength and the overall sleekness of the design remain the same.

The one exception to that rule is the fur strip that wraps around Bayonetta’s neckline and collar. This detail adds a softness and humanity to the character that stands in strong juxtaposition to her otherwise slick, skin-tight wardrobe. It’s a touch that I would personally like to see return in her next game. 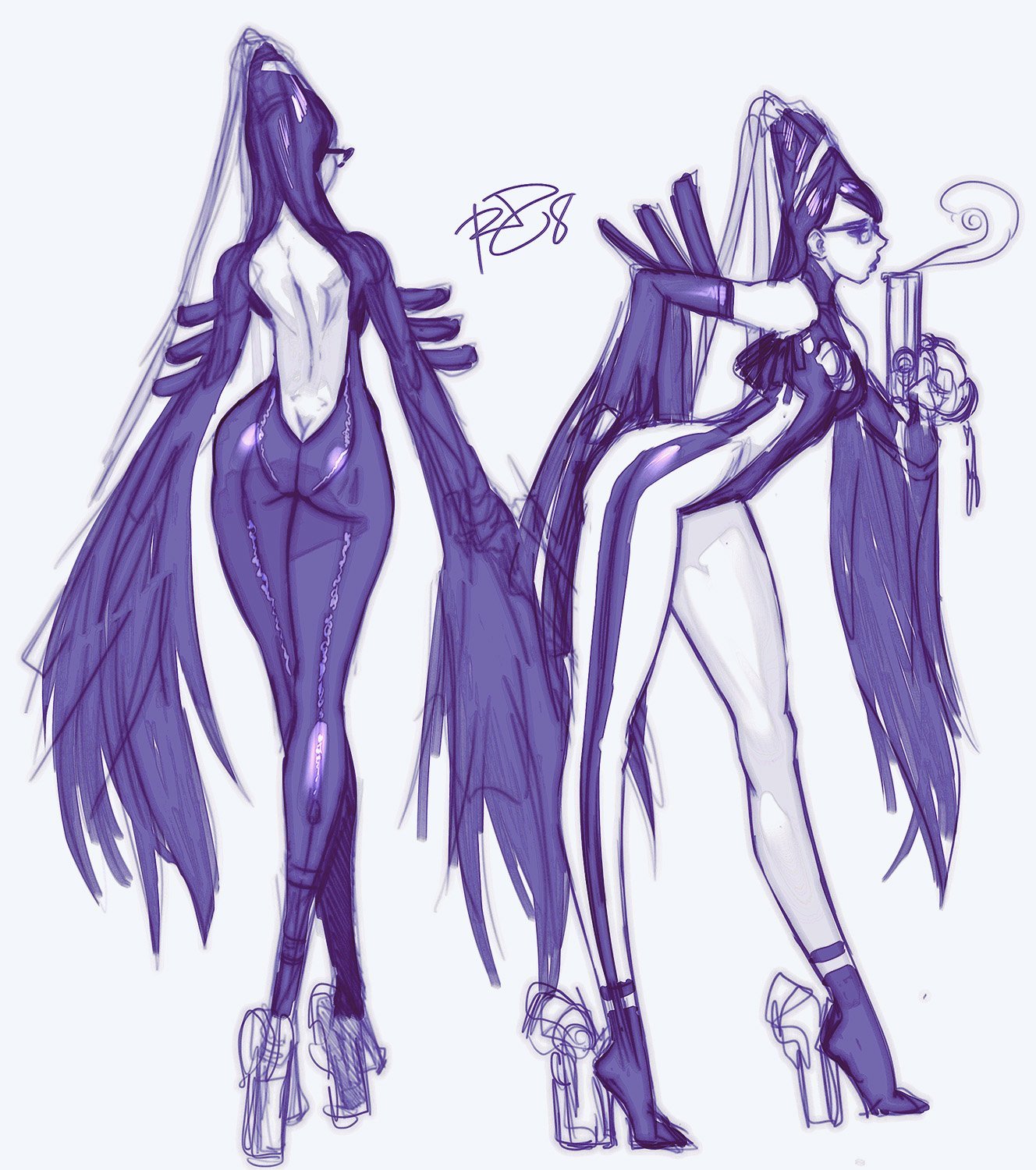 Here we have a quick sketch by Destructoid favorite Robaato that takes Bayo’s design from her first game and add the purple theme from her pre-release days. I think it works incredibly well, and would surely be a hit with fans of the series should Platinum want go for something like in her upcoming game, but given how they’ve consistently changed her look for her starring appearances thus far, my guess is they will go with something a little more unusual in the end. 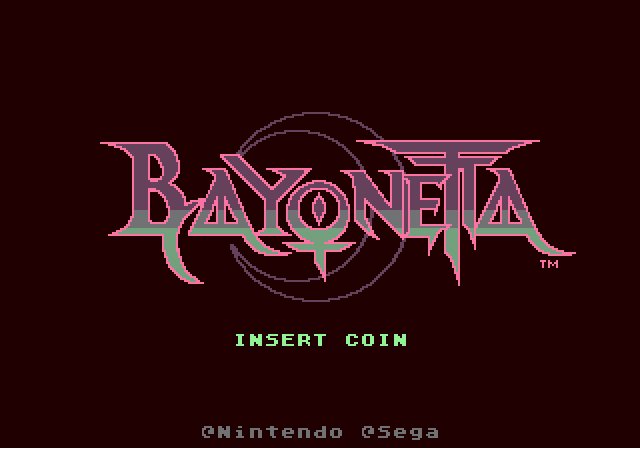 I asked Castpixel, another fantastic artist, what she thought Bayonetta might look like in her third game. True to form, she whipped up something for us in the style of another classic Sega title about a magical dancing hero. Though I know she doesn’t actually think Bayonetta 3 will look or play like the arcade release of Michael Jackson’s Moonwalker, her imagination was too strong to resist, and before I knew it, she had was showing off this mock-up of her hypothetical take on the game. 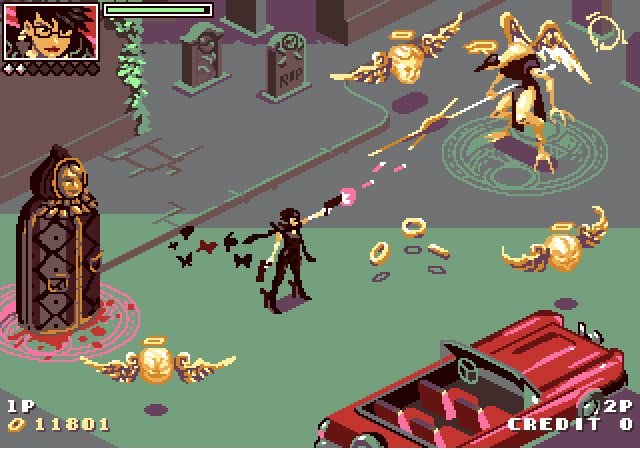 If her style looks at all familiar, it’s because she’s the same artist that made that Jumanji-meets-Cadillacs and Dinosaurs fan art from a few weeks ago. What’s particularly amazing about this piece is that she managed to create it using a palatte of just 16 colors, making it a perfect fit for classic hardware, should someone have the guts to try to make a playable version for the NES or Sega Master System (though the resolution of the screenshot shown here may present a bit of a problem). 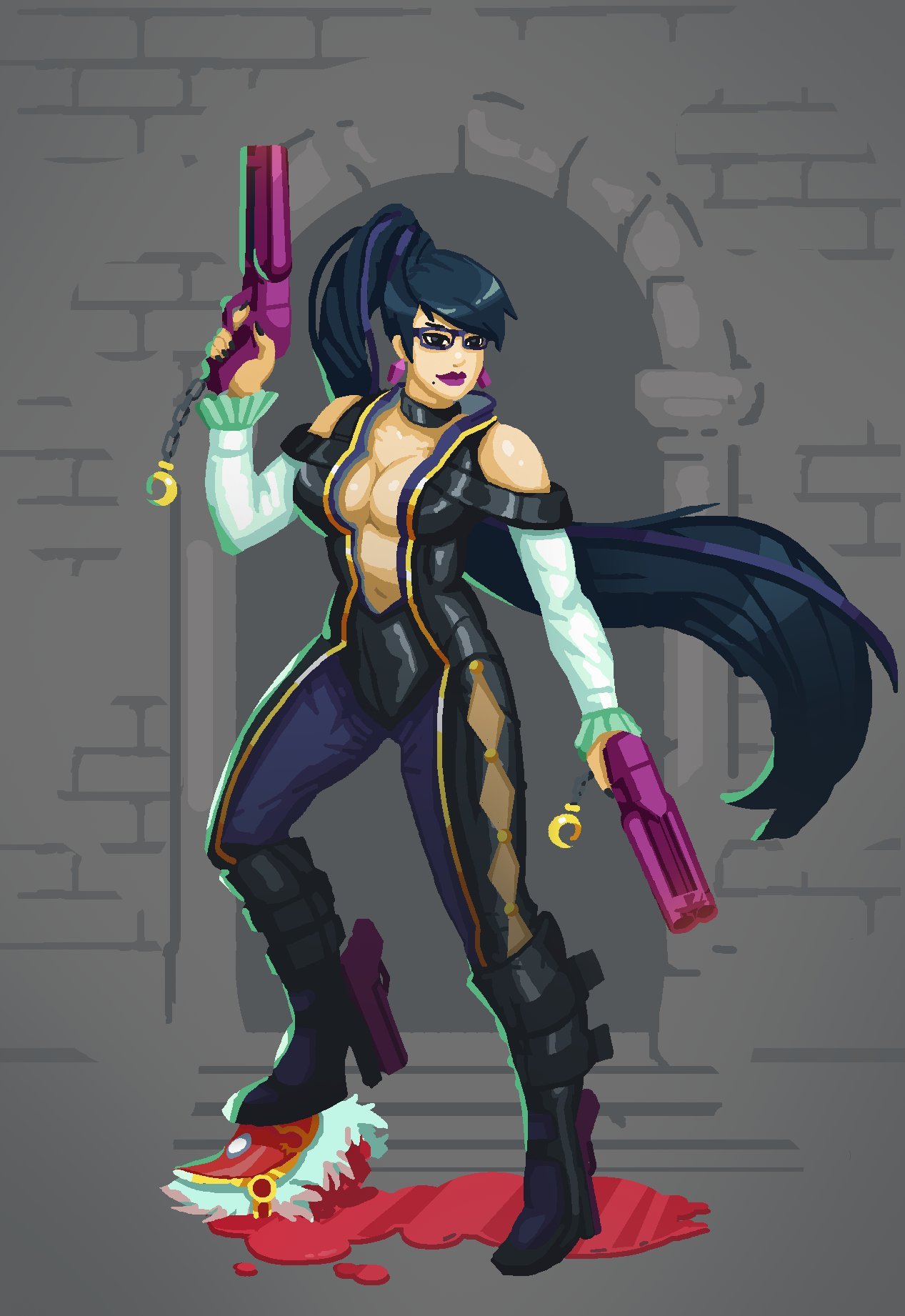 Here artist Cannonbreed takes an honest stab at how Bayonetta may look in her 3rd game. She’s got a hairstayle that combines the beehive from her first game with the bangs in her second, and a more brazenly exposed bust then she’s ever sported before. Despite that fact, she still doesn’t come off as sexually prone or vulnerable, and instead takes on the kind of physically imposing, authoritative stance you might find on Lara Croft in one of the modern Tomb Raider games.

It all comes together for a more Western-fantasy look, which could end up being a big hit on both sides of the pond.

Professional animator Alex Berry offered us this comical look at what he might do with Bayonetta’s design if given the chance. Despite being an object of desire for many, the character has the very unsexy honor of being one of the only characters in videogame history to wear her own hair as clothing.

Some take this as a subtle nod to the second wave feminist push against shaving underarm and leg hair. Others just think it’s more of a play on the stereotype that women like to get their hair done. Either way, a new Bayonetta game starring a butt-kicking Cousin It could definitely be fun, as long as it doesn’t take the place of a full-on follow up to her more traditional titles. 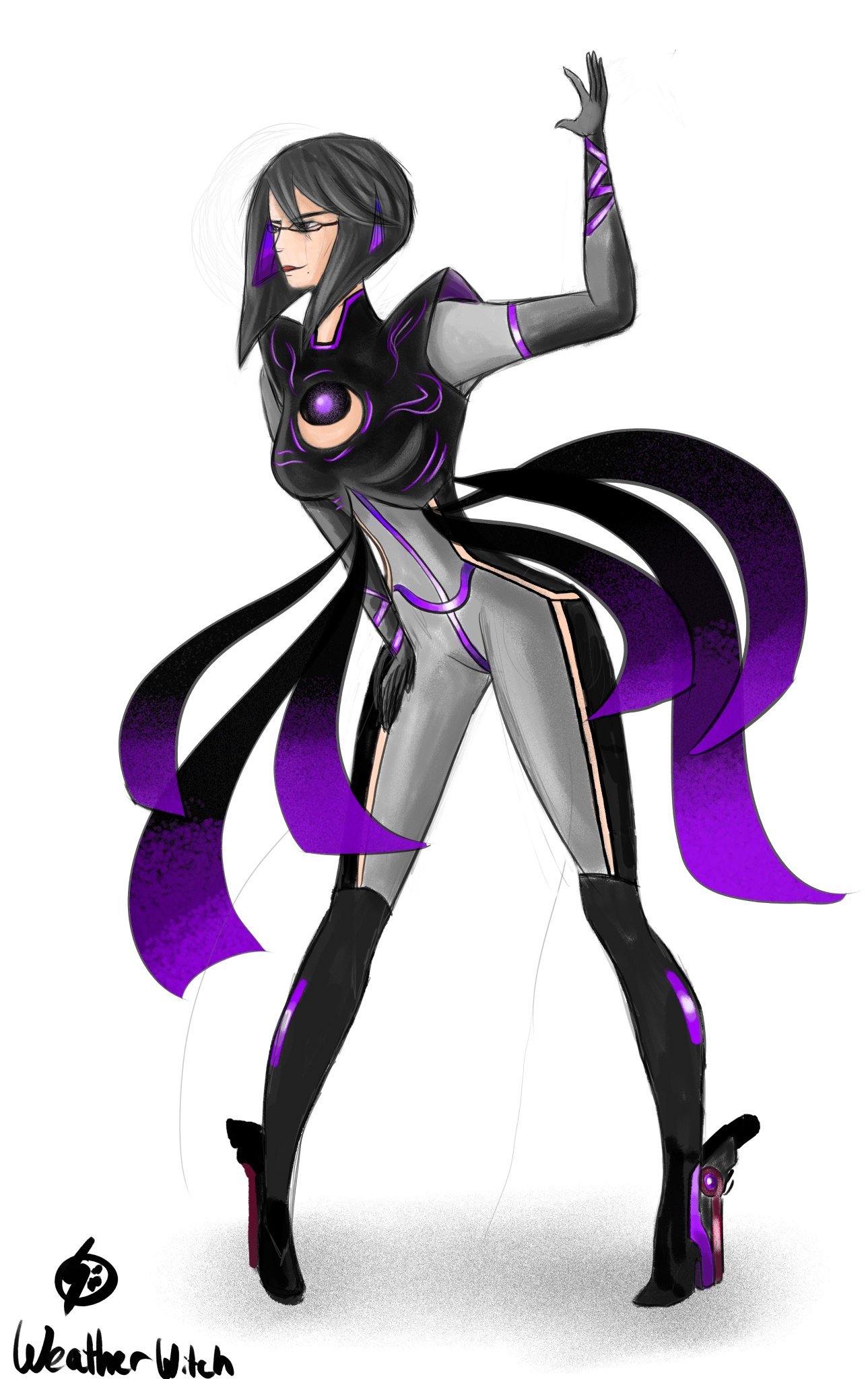 Character designer and animator Weather Witch, most well known for the fan-made Cat Girl Without Salad animation series that she created in high school, took the opportunity to branch out from her usual style for this project. Her take on Bayonetta is the one that sticks most closely to the core visual design principals that Platinum has laid out for the character, while still adding plenty of new ideas as well. 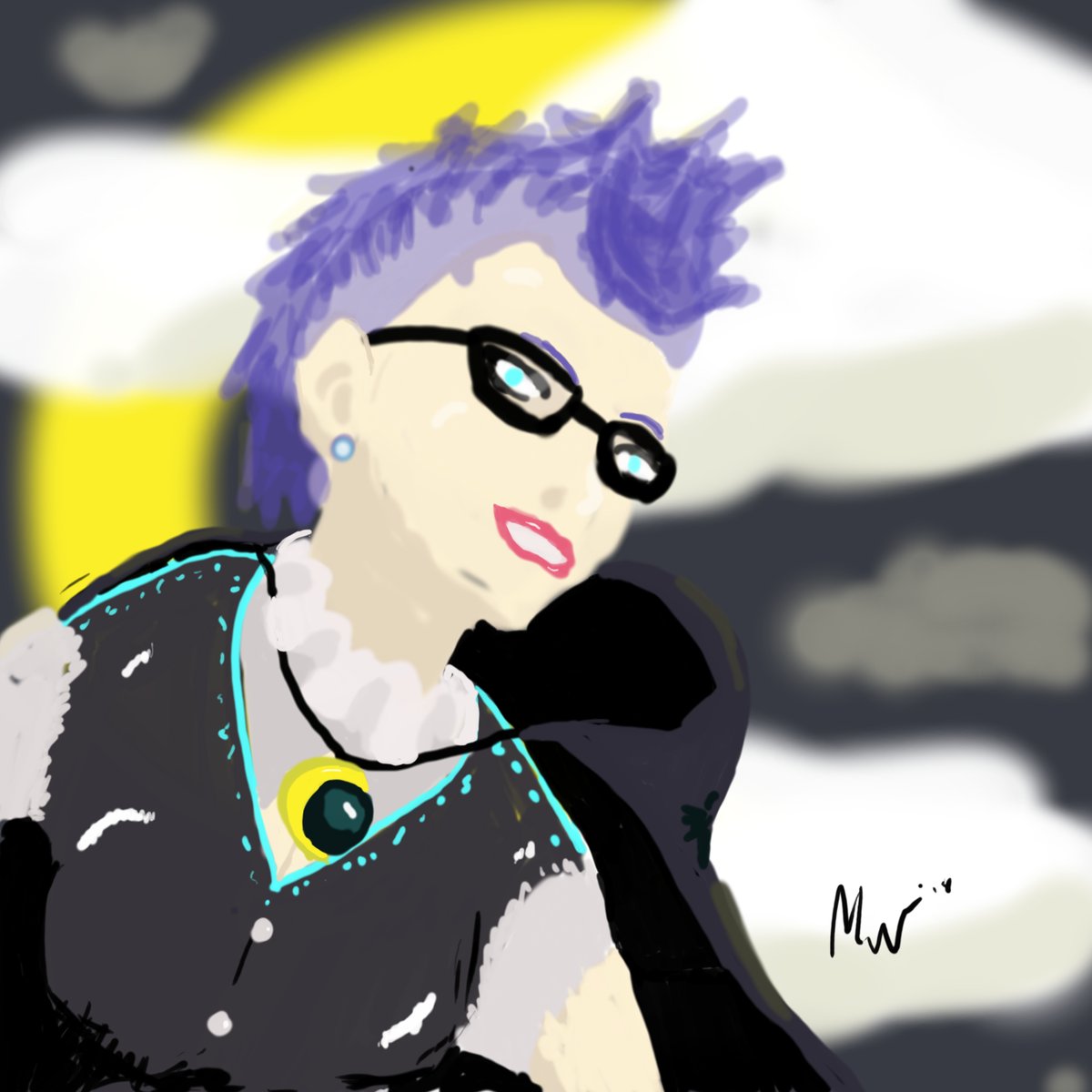 On the other hand, game developer Matt Willis took the most radical step away from Platinum’s previous vision for Bayonetta with this badass butch punk take on the heroine. I can only imagine the uproar that might ensue if this is how she ends up looking in Bayonetta 3. While she’d definitely lose some fans along the way, this “nasty woman” look would definitely bring in a fair share of new fans to the series as well, potentially making for a profitable trade off in the end. 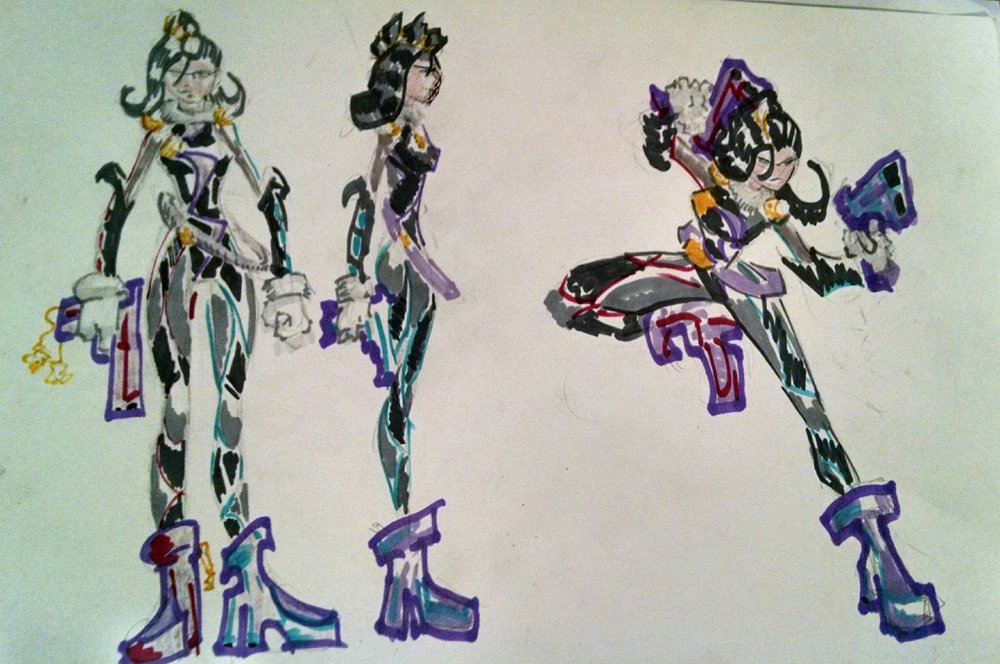 As for me, I couldn’t ask all these great artists to contribute their designs to this piece without trying to do the same myself. Above is a quick color study, trying to piece together exactly what my speculative fan fiction “fusion Bayonetta” might look like. She’s asymmetrical to a fault, with a split running down her outfit that mirrors the “3” shaped crack seen in the emblem at the end of the Bayonetta 3 teaser. Her hair is long and feminine on one side, braided close to her scalp on the other, with a sort of ponytail mowhawk in the middle.

I also tried to bring back the fur trim from the Bayonetta Beta design, but the fuzzy gloves ended up looking more big and clownish than I intended. In fact, the whole design, with it’s fractured chunks of grey throughout her leggings, ended up looking a little too Jester-like for my taste, so I took one more crack at her design while I had the time. 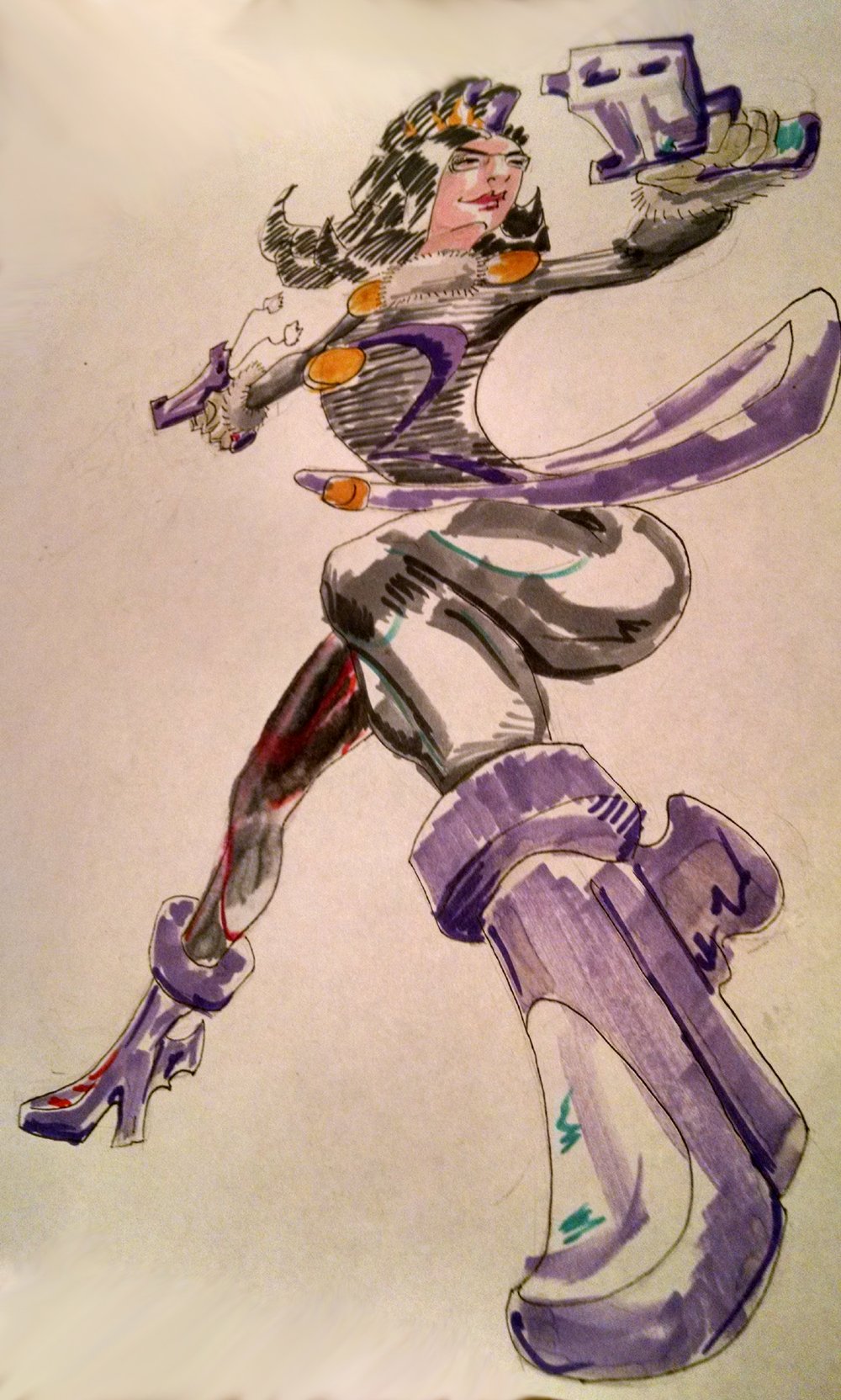 I managed to pull off more of a ribbed sweater look for her top here, which I think is a better fit for the fur trim, while also hearkening back to the “lines of power” feel of her pre-release design. Her shoe guns have a sleeker look as well, less steampunk, more futuristic sex toy, which is territory that makes sense for this character from my perspective. The split between her red and blue sides is more subtle, and while I’m still not sure what the heck I was thinking with that giant purple hulahoop/belt thing, I think that with a little refinement and more attention to detail, this design could work.

I’m also not 100% sure I’m pulling off the worm’s eye view forced perspective thing here, but I figured it was worth a shot. Fluid motion and constant action are two of Bayonetta’s defining traits, with impossibly long legs being her 3rd most well known attribute. Putting them all together for what may be my last chance to speculate about her potential look for her 3rd game seemed like a no-brainer.

If you have ideas for how you’d like Bayonetta to look in her upcoming threequel let us know in the comments. It may be your last chance to do so as well. I’m betting that our first real look at Bayonetta 3 is just around the corner.