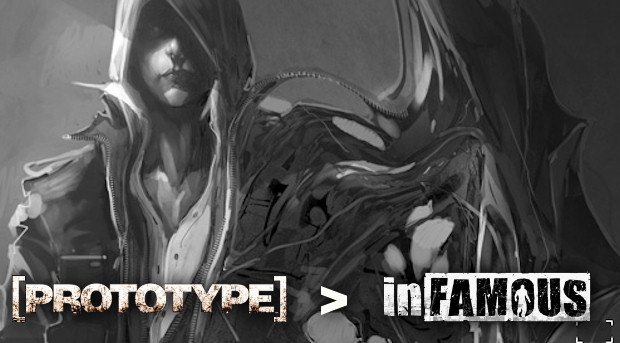 Two games have recently been released that bear several striking similarities. Both of these games are open-world sandbox titles featuring superpowered antiheroes who begin to realize a host of awesome abilities with which to distribute justice and/or malice as they see fit. While they share a lot of features, the two games are certainly distinguishable, taking the superhero model in different directions.

However, that doesn’t mean we’re not going to compare and fight about them anyway, just because we can.

Contrasting the two games, it is very obvious that Prototype is better than inFAMOUS, and anybody who disagrees is a despicable moron who doesn’t know anything about videogames and should probably just die. Read on to feel justified in agreeing with me, or to be shamed by just how incorrect and rubbish at life you truly are.

Apparently, Cole is supposed to be a superhero, which doesn’t explain why, exactly, he’s an utter pussy who couldn’t hold his own in a fight against Anne Frank. While Mercer is able to take on an entire army, a special forces group, and a city full of infected mutations at the same time, Cole struggles against junkies and hobos, barely able to defend himself against a few druggies dressed in trashbags. It’s disgustingly pathetic.

Mercer is pulling the tops off tanks, hijacking helicopters, and absorbing monsters into his own skin. Cole is hanging off the sides of buildings take wimpy little electric potshots at some loser with a shotgun.  If Cole were to audition for the Justice League, Batman would give him a wedgie and then laugh him out of the building. He’d be right to do so. If Mercer turned up for the same audition, he’d probably just eat Batman. This is because Mercer isn’t dickless like Cole is.

On the subject of Cole being a pussy, what kind of lame, worthless “hero” can’t deal with a chain link fence? Many are the times in inFAMOUS when enemies will safely hide behind fences, happily shooting the shit out of you while your electricity attacks harmlessly disperse along the metal that stands between you and retribution. Unable to do anything to remove the fences, Cole is absolutely helpless in this situation. Quite why the game’s villains didn’t just trap him in a big metal chainlink box, I do not know. He’d have been able to do nothing but cry.

While playing Prototype, I came across a few chain link fences. Remembering Cole’s shame from inFAMOUS, I conducted a little test titled, “Is Alex Mercer defeated by fences like that idiot Cole?” The result of this test is very conclusive — Alex Mercer can punch chain link fences into tiny fucking pieces. Mercer is to fences what Ed Kemper was to the severed heads of college girls. If any enemies dared to stand behind a fence and shoot at Mercer, he’d pull that shit right down and then cut the prick into tiny little pieces. Meanwhile, all Cole has to do is see a bit of thin metal and he runs away with shit streaming down his legs.

Both inFAMOUS and Prototype feature an experience system that can be used to upgrade characters. However, only one game features upgrades that are actually worth getting. If you’d have guessed that inFAMOUS was that game, you’d be a fucking twat.

Let’s compare the two experiences — after several hours of playing inFAMOUS, I had finally eked enough XP to purchase one or two powers that were barely useful. After five minutes of playing Prototype, I had more XP than I knew what to do with and was soon gliding from the rooftops, slicing people to bits with claws, and performing mid-air dashes. Prototype showers the players with rewards and then treats them like a kid in a candy store. inFAMOUS makes you work severely hard, earning maybe up to 5 XP per kill, for such shitty powers as “barely effective stomp attack that usually causes more harm than good” or “melee damage that you won’t need because enemies are always hiding miles away from you.”

Seriously, inFAMOUS? What the fuck is with that grammar? Prototype is just Prototype. It’s not prTROToTYpE or pr0t0typ3 or P.R.O.T.O.T.Y.P.E. Simply Prototype. inFAMOUS is stupid and pretentious. That kind of spelling makes it look like Apple designed the game. It’s a fucking videogame, not a shitting iPod.

inFAMOUS loses the battle of the names, which is a real and serious battle and not just an arbitrary, contrived point of contention invented to generate fanboy rage. Sony should come back when it learns to spell things properly, not like some 14-year-old girl’s LiveJournal.

Seriously, PlayStation? With a capital S!? GET REAL, SONY! Or should I say sOnY!?

P.S: Some people have tried to argue that Prototype is spelled [PROTOTYPE] and this is stupider. It’s actually not though. Brackets aren’t letters so it is not a spelling you idiots, and sometimes Sega can be spelled SEGA. Because of these reasons, this means I am still right. I have reasons.

Say what you will about Prototype (although mainly say it’s better than inFAMOUS, because it is), the game certainly doesn’t shy away from having a variety of enemy types with which to deal. Tanks, choppers, soldiers, supersoldiers, mutants, robots, there is plenty to fight and plenty of ways to go about it. inFAMOUS comes up short yet again, thanks to enemies that pretty much behave in exactly the same way from the very start of the game to the very end.

The gangs of inFAMOUS look pretty good, but there is nary a difference between them. The Reapers and the Dustmen are just model swaps as opposed to anything else. Occassionally you get a powerful opponent called a Conduit, but they are few and far between, leading to the same, repetitive battles throughout the whole experience.

Also, inFAMOUS is ghey. I saw it being ghey a bit and it looked at me when it did it.

6. The Prototype comic book has an awesome rapetrap story in it:

In the Prototype comic book, there is a bit set in Vietnam, and some soldiers are talking. One of the soldiers mentions his friend, who tried to rape a fourteen-year-old girl but was unsuccessful because he, and I quote, “Got his dick sliced up real good on account of the little slope sticking glass in her cooch for just such an occasion.”

Proof, if proof be needed, that Prototype is better than inFAMOUS. InFAMOUS doesn’t even have a comic (that I’ve been bothered to read), let alone one with Vietnamese cooch glass rapetraps.

Mercer and Cole both have very different ideas about what Parkour is. One of them thinks the best way to get around town is to slowly climb up buildings, trying to guess where the player wants to go and generally grabbing the wrong thing to frustrate everybody and become a prone target for enemies. One of them just runs the fuck up a building and then flies to wherever the Hell he wants to go.

One of them’s a total prick. One of them is called Alex Mercer and he likes to run up buildings. While playing as Mercer, you can dash through the streets and gleefully have him jump instantly over cars, push through crowds and dash up vertical surfaces. As Cole, you can run a bit fast and be worried about jumping in case he magnetizes himself to a lamp post or whatever else happens to be in the way. That is when Cole doesn’t just glitch through the road.

“Wah wah wah, I’m Cole, I can’t get wet because I’m full of electric magic and that means I’ll get hurt!” Cry me a river, bitch. Oh wait, you can’t because if you did that you’d get wet and then you’d die! What a frigging pansy. Cole can’t get wet because he’s an immense wanker and gets hurt just whenever he touches the stuff.

Once again, you come up trumps on Prototype. If Alex Mercer happens to fall in water, he stays submerged for a second before thinking, “fuck this drowning shit” and leaps heroically out of the blue and onto dry land. Meanwhile, Cole can’t even take a bath and so obviously stinks of shit and smegma. How can he even drink? He can’t, apparently. Cole is destined to die of thirst, while Mercer can drink whatever the hell he likes.

9. The head of developer Sucker Punch is racist:

Square Enix’s personal and hate-filled betrayal of everything PS3 fans hold dear is proof positive that Prototype is better than inFAMOUS, as well as Killzone 2, Uncharted and LittleBigPlanet. I have come to this conclusion using a little thing called logic, and you can’t dispute logic, so don’t even bother trying you idiot.

There you have it. I have sufficiently proven that Prototype is blatantly better than inFAMOUS, and if for some reason you still don’t agree with me, you are obviously some sort of fucking retard who needs to go drown in a swamp.