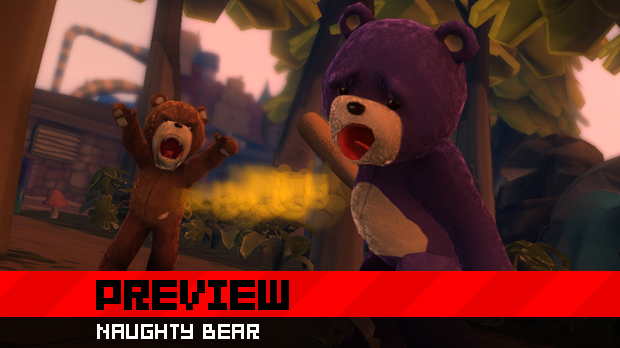 Hiding in the bushes just off the lake, I could see them. They were having a good time, listening to music and dancing in the cabin, but it wouldn’t be that way for long. Knowing that they always had to have things perfect, I went to the building’s circuit box and sabotaged it. One red-head came out to see what the problem was; she was promptly electrocuted. His friend, a blond, followed her out, where I beat her to death before grinding her face in a hot grill. Take that.

By then, the others knew I was here — those damn teddy bears — and they were freaking out. Good; that meant my job was already halfway done, but the cops were coming in a boat on the lake. Back in the bushes I went, leaping out to break the necks of those foolish enough to try and flee. One ran to a car, so I slammed his head over and over into the door. The cops, who themselves were getting scared, were shooting at me. I got a hold of a gun, and killed a couple of them. Finally, there was one left — probably a rookie — and he was so freaked out by my horrifying presence that he beat himself to death with a baseball bat. That was the easy way to go.

Follow the jump for my impressions of Naughty Bear!

Naughty Bear has been designed by Artificial Mind and Movement to evoke British Saturday morning children’s entertainment. Think Bananas in Pajamas or Thomas the Tank Engine, and you are not too far off. The plot is pretty simple. Naughty Bear is a lovely misunderstood teddy bear. He’s really not all that bad, but the other teddy bears are inane, stupid little pricks who do everything that they can to plan his death. Of course, Naughty Bear is well aware of the things that they are trying to do, so his natural course of action is to gruesomely slaughter them in the best manner fit.

This is the basic core of Naughty Bear. The game is broken up into seven story-based missions, where something usually will happen to cause him to go on a rampage. For example, one mission had a birthday party to which Naughty was not invited. In another, a stupid bear invites his friends over for a cooking class and accidentally summons “zombears.” This pisses Naughty off, and he must deal with the problem. He kills the zombears and the approaching military bears, and slaughters the birthday party attendants and the birthday bear himself. All of these are plot-based elements, and they also give plenty of opportunities for really interesting kills.

The game gives you some objectives; there are always at least two. For example, Chubby is a selfish douche politician bear who is running on the campaign of killing Naughty Bear. For that level, Naughty has to complete many objectives, though others are optional. For example, he has to score a certain number of Naughty Points by performing stylized kills and or dealing with a certain number of the ninja bears that Chubby has hired to protect himself.

Each level is sort of arena-based, as you must do a certain amount of stuff in each area before moving on the next. All those kills I mentioned in the header, well, that might just be the beginning, and it’s good practice to mix things up. Setting traps, hiding in the woods, destroying stuff, scaring bears, crippling bears, scaring them so much they take their own lives — it’s all so delightfully twisted and sadistic. It really doesn’t get much better than jumping into a cabin through the window after watching a picture-in-picture feed of the other bears barricading the doors and laughing at you. Once you jump in, they start screaming and running to the doors and freaking out…all before you grind their faces into an arcade machine.

Naughty Bear lives and breathes on its score system. For every naughty thing that you do, you get points. Impaling a bear or scaring the rare Unibear (a unicorn bear, duh) will get you much higher points than ruining a cake, and racking up these points will set off the combo timer. It will slowly roll down from a 100x multiplier, so you need to be a naughty bear quickly (and repeatedly) to get your score as high as it can be.

So Naughty Bear is actually a bit like Geometry Wars, where the score is super-important. Even though it plays like a sandbox title, the game will constantly be throwing your score in your face, comparing you to your friends, people all over the world, highs for that week, and your overall meta score. You need a high score to unlock things, and the higher your score, the better you’ll be doing. It’s all about the score, so you’ll be playing levels over and over to be the best.

This is actually one of my biggest concerns with Naughty Bear. There are only seven levels to play, and that isn’t that much. While the game does have some story elements, it really does just give you an excuse to do horrible things to very cute things. But you can beat a level in just a few minutes if you try hard enough. Hopefully this push for the “highest score possible” means that the game does a good job encouraging replay, but we’ll have to see.

Graphically, the game looks pretty standard, as far as PS3/360 titles go. However, there is a lot of charm here, for the teddies are adorable and cute — especially Naughty Bear. It’s even better with the special bears, such as the ninja or zombie teddy bears. Those special teddies can be unlocked as costumes, and depending on what you wear, you’ll get special abilities that will make levels much easier or harder. For example, the ninja costume will make you faster, and the zombie costume will have the admittedly-difficult-to-kill zombies ignore you. As far as DLC goes, we can probably expect more costumes and levels. As far as audio goes, the kindly narrator is awesome, and it’s great to hear him make awful puns as the teddies die.

Naughty Bear is possibly the most violent game I have ever seen, all without a drop of blood and gore. As a matter of fact, these teddies don’t even have that much dismemberment and fluff spouting everywhere. Sure, their heads might go flat, or they might twitch a bit, but it’s not the most distressing thing ever. What makes it the most violent game I have ever seen is that if this were a game with people or realistic violence, this would be rated AO, beyond a doubt. Surprisingly, Artificial Mind and Movement is expecting a Teen rating. Let’s see if that happens.

I’m actually fairly impressed with Naughty Bear. For a game devoted to deviant behavior, Artificial Mind and Movement have done a great job of letting players become the absolute worst and violent that they can be. What I was shown looks like a whole lot of fun, and while I’m concerned that the apparent lack of levels could keep those not inclined to replay levels bored, there really is a lot to do. The pure twisted charm in slaughter is played to great effect here, and I, for one, am excited to see how Naughty Bear comes together for its launch this June.