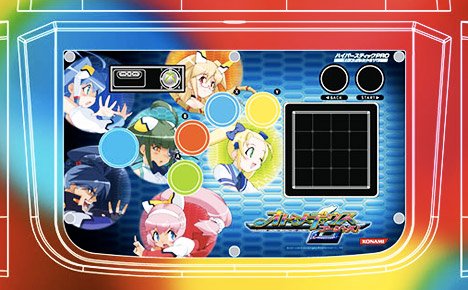 If you’re unfamiliar with Konami’s latest STG, Otomedius, go here and be amazed. It hurts my heart to think about it, really. The game looks to be a delicious shmup experience, combining the same style of mecha musume character design found in games like Triggerheart Exelica with gameplay and level design reminiscent of Konami’s hilarious (and hard) classic cute-em-up, Parodius. Why would that make me sad, you ask? Well, it’s slated for release on Xbox 360 in Japan this September, and Konami has yet to breathe a word of it ever coming out anywhere else.

That sucks especially hard when you hear that Hori is releasing a sexy new arcade stick, designed specifically for use with Otomedius. Harder still? The thing has a goddamn touch screen on it, just like the original arcade version. I want one. We all want one. Purchase of this beauty will also score you a bundled-in copy of the 360 game itself, as well as six character badges, whatever the hell that means.

Moonspeakers can pre-order one at Konamistyle for what roughly converts to about $270 American, and everyone else can expect to be raped by an importer, likely for well over $300. We’ve already geeked out about the Otomedius toys over at Tomopop, and you’d think with the way Konami is pimping this game to death in Japan, they might consider letting the rest of the world give them some money for it, too. Here’s hoping.

[Respeck knuckles to Buster for the tip]