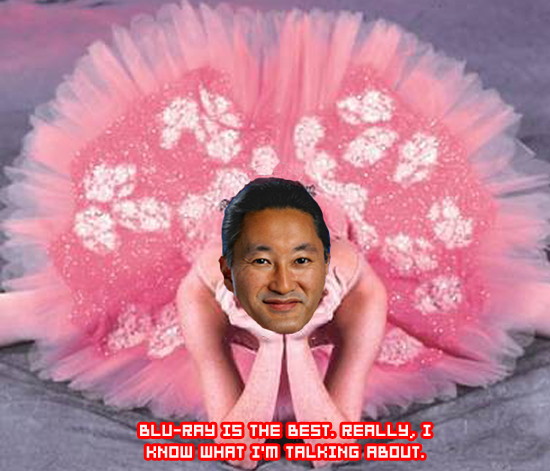 In a recent interview with Hollywood In Hi-Def, Kaz Kirai went with the usual song and dance about the PS3 and its infinite superiority. PS3 versus other consoles were discussed as always, and Kaz had a bit to say on that:

HIRAI: I have heard many people say our competitors’ systems are just as powerful as PS3. That simply is not true. No other next-generation entertainment system pushes the envelope on advanced technology like PS3. I have heard people say that a high-capacity game delivery vehicle like Blu-ray isn’t necessary in a next-generation computer entertainment system. You just can’t expect that the 9 GBs of storage capacity found on today’s DVDs are going to have enough space to hold tomorrow’s games. Developers have already pushed the DVD to its limits in terms of space used. We had games like ‘Resistance: Fall of Man’ coming in 16 GBs at launch. That game simply wouldn’t be possible on any other system without using multiple discs. There is no doubt in my mind that you need more capacity on discs for truly next-generation gaming, and Blu-ray gives us that space.

Sony kind of reminds me of Rome in the time of Jesus these days. The focus is all power, what it can do, and conquering everything else. We KNOW you have a powerful system, guys. The thing is, you’re still struggling to sell them and Microsoft isn’t struggling to sell the 360. Nintendo are rolling around in their money up there at headquarters and laughing the demented laugh of the hysterically rich. What’s the secret here? Let me let you in on it, Sony – no matter how advanced your product is, if people aren’t having FUN playing it, it won’t sell.

Consumers have lost respect for Sony because Sony has lost respect for its audience. If their public announcements are any clue, Sony envisions us as a technology-hungry audience willing to plop down all our savings for the newest, best thing. Sometimes, this does work. But the factor of price is a big thing to all consumers, whether the system is amazing or not. By taking themselves too seriously and making one vain choice after another, they have lost much of the fanbase they gained with the PS2, myself included.

Laugh at Wii’s cheesy family oriented approach all you want, but it’s selling consoles. If Sony would remember their consumers for what they want and enjoy, they might have a chance to regain them. Forget their humanity and approach them like robots, and they will continue to lose people. It’s really as simple as that.