This week’s setup belongs to shipero. Pictured above is what his set up used to look back in 2005 when he was stuck in a small place. Now, he has his own apartment all to himself with a setup that’s not too shabby. Check out shipero’s C Blog for more pictures of his room and collection.

Several Dtoiders celebrate their birthdays, Mr Sadistic is the comment king, STUVNING made an awesome Samus mural, a couple of more PAX related blogs went up, blehman is trying to setup a Dallas NARP, and plenty more happened in the Community this past week.

Oh that Jim Sterling! SUCH A HAM!

Mr Sadistic won the week by his comment on this blog. He is now the comment king.

There were a lot of birthdays this past week in the Dtoid community. -D- celebrated his birthday this past week and Butmac made him a very special video gift.
Ben Briton made a sw33t Destructoid spaceship in Spore. The only way this could be better is if the space ship had giant penis guns that say “pew” every time the penis guns fire.
The next Dtoider to celebrate his birthday this past week was Chad Concelmo. Various members of the Destructoid community came together and bought Chad a day of swimming with the dolphins at Sea World. That’s a pretty AMMMAAZZZIIIINNNGGG gift.
blehman is thinking about throwing a Dallas NARP in a few months but wants to see if there would be enough people interested in coming out. Hit up blehman and let him know if you would want to go! 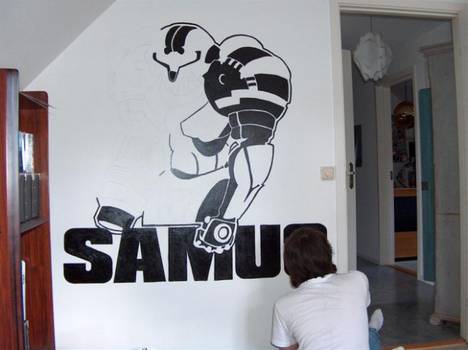 STUVNING showed off the Samus mural you see above earlier in the week and finished the project a couple of days later. The Samus piece turned out pretty badass and he’s thinking about doing Castle Crashers next.
Happy birthday to Tactix and his pimp hat.
RetroForceGO! ringtones GET!
RetroForceGO! images set to the podcast GET!
MY EYES!!!!!!!!!!!!!!!!!!!!!!!!!!!!!!!!
Happy birthday to aborto thefetus. I’m glad you weren’t abortod! GET IT?!
Sirinth shows off some of her latest videogame cross-stitch. The Bulbasaur looks awesome.
Cutie Honey shows some some more of his giant PAX photo collection, this time focusing on all of the cosplay he saw at the show.
The latest episode of FAILCAST finally went up with special guest star, Y0j1mb0.
Highlights end with happy birthday wishes to Dyslexic and Savant!