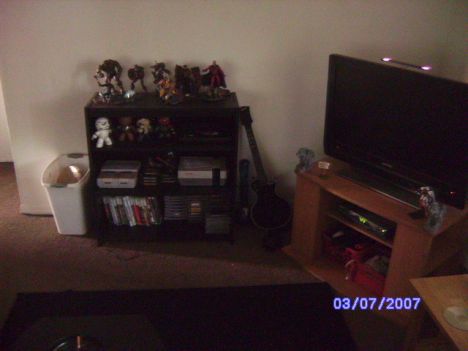 This week’s room belongs to Snaileb. He’s got a large gaming collection ranging from Super Nintendo to the Nintendo Wii. He also has some awesome figures and posters. For more of Snaileb’s setup, check out his blog.

This week’s highlights include a Metroid fused with Mr. Destructoid, Color loving, a Dtoid WoW guild, and celebration of the one year birthday of the Community Blogs. Hit the jump to check out all the highlights from this week.

Au Revoir TopGearGorilla! TGG is heading out for a little vacation in France and Britain for the next three weeks. Any Dtoiders near Londaan should PM TGG.

So the 50th episode of RetroForceGO! just took place and Dtoider Haxan wanted to show off how much he loves the show. Haxan made some drawings of the four Retro superstars. The drawings are really awesome and depict Chad, Topher, Colette and Dyson as their favorite game characters.

Coonskin05 gets very lovey when he gets drunk. Detry on the other hand, is a mean drunk.

Cowzilla3 is out of shape! But not for long as he’s going to be using Wii Fit (and real exercise) to get back in shape. He’ll be blogging his attempts and hopefully posting more half-naked pictures.

brecksher recently found out about the fabled Destructoid badge idea that has been in the works forevers. Who knows when it will see the light of day, so that’s why brecksher made his own badges. brecksher also created these achievement pins.

Animated Trigger fused a Metroid with Mr. Destructoid. The results are awesome. Shortly after that, he went ahead and created an even more amazing Metroid Destructoid hybrid.

The next DtoidAustralia NARP is set to take place at the end of this month at Supernova. If you’re interested in meeting up with other Australians, just drop a message in that blog and add the DtoidAustralia group to your friends list.

The GHost continues on with his epic Destructoid card packs. His latest set include:

With the new packs comes the Destructoid Card Game Rules. I really need to check out how much it would cost to get these cards printed up. And of course, there are Drinking Game Rules too.

Butmac has created the Destructoid WoW Guild. If you want to play with other Dtoiders in a game of WoW, just contact Butmac. Or something. I’m not sure how WoW really works. I stay at least 10 feet away from that game.

I just wanted to give Geoff a little plug here as his new FreezeCracker concept is actually really serious. It’s a news show done in the style of Phoenix Wright.

Hoygeit started a new trend in the C Blogs this past week. He just got a Illustrations software for the DS called Colors that lets you paint on your DS. That stunning picture of Peach was created on the DS.

Fana7ic then contributed his own creation and filmed the drawing he made in Colors. He also made this Killer 7 piece.

Coonskin05 gives Colors a shot next and creates a masterpiece. 11/10.

Next up on the Colors love is Ronin and his piece on the new Prince of Persia game.

DJDuffy shares with us her Colors piece on Poison. Tranny or not, I’d do … it.

DVDDesign’s sick contest portion with GTA IV is finally over. Conrad Zimmerman can finally play GTA IV and Conrad showed just how much of a champ he is by not losing his mind to … is … is he crying? Wow. What a pussy.

Skribble is working on a Flash game. His current project is still in the early stages, but he does have a much older game he helped create linked in his post. Give it a try and see what you think.

boylie got bored so he made a 3D piece of Mr. Destructoid. Neat.

jaredr, if you didn’t know, was a writer over on GameTap. Well, he was until GameTap fired the entire editorial side of the site. Good luck Jared. Hope you find something soon.

Nick Chester went off to visit Capcom in Las Vegas this past week but before he left, he wanted to show off his awesome swag that he got from Capcom. Wow Nick, your job is so hard. Get awesome swag and fly off to play videogames.

abortion the feets wrote another well thought out piece with this one focused on fear and supernaturalism in videogames. It’s a really great read that you should take a look at.

OK, all this Chad Concelmo fan posts are starting to creep me out a little.

RandomCTG shows off his custom Big Daddy sculpture he made. Neato.

Also, Happy Birthday to the Destructoid Community Blogs. The C Blogs were born one year ago and have since evolved into something amazing. You all are awesome and make me look forward to waking up every morning. Except the trolls.