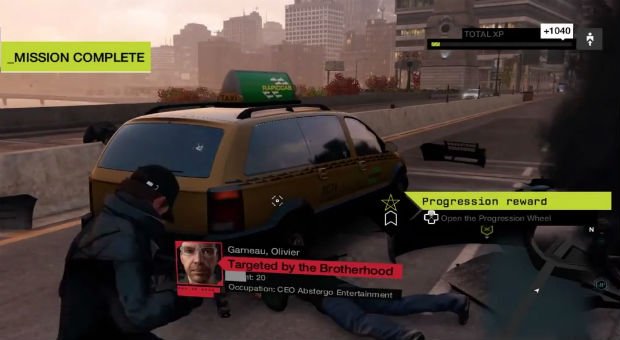 I think I’d rather just have a Reese’s cup

Wait, you mean Watch Dogs isn’t simply an extension of Assassin’s Creed? I kid, I kid. It appears that Olivier Garneau, CEO of Abstergo Entertainment (as seen in Assassin’s Creed IV: Black Flag) is actually in Watch Dogs in the middle of the criminal convoy mission “Requiescat In Pace.” Be wary of spoilers if you haven’t played the game yet.

It’s revealed in the mission that Garneau was actually targeted by the “Brotherhood,” an obvious reference to the modern-day Assassin’s Brotherhood. I’m not that surprised, given the multiple connections — however, Assassin’s Creed writer Darby McDevitt stands by the assertion that the game connections are just for fun and that the games do not, in fact, take place in the same “shared” realm.

“[Watch Dogs is its] own game in the Ubiverse,” McDevitt explained on the Ubisoft forums. “We like to put Easter eggs in our games, but they are not literally connected.” That’s all well and good and all, but I have to think that maybe, just maybe, they might actually be — and this’ll all be unearthed in a big announcement in a year or so. Just watch.