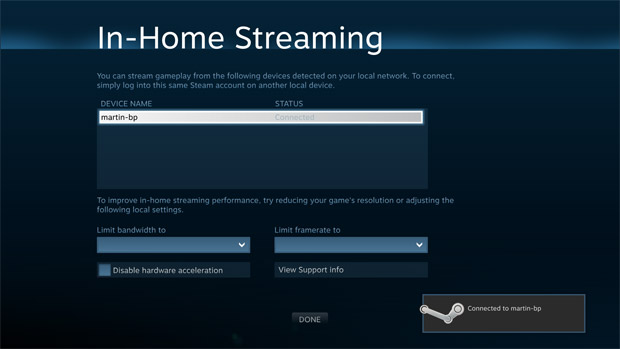 The mischievous folks at SteamDB have managed to access Valve’s upcoming “In-Home Streaming” feature for Steam that was talked about during the SteamOS announcement. It will allow users to play Windows and Mac games on, say, a Steam Machine over their home network. I specifically say “will” because the feature isn’t fully implemented yet.

Since it is viewable, we have learned a bit more about it — like the options to limit bandwidth and framerate. SteamDB gives an example of how in-home streaming could work: “Let’s say you have Team Fortress 2 on your Steam account and don’t think it’ll run on your Steambox setup. You’ll have to stream it off your desktop. If TF2 is not installed on your desktop you can install it remotely. When you have it installed you can simply press “Play” and it should start streaming.”

Sounds good in theory, but I’m most interested to hear what kind of a connection we’ll need to maintain good visual quality. That could be where things start to fall apart for most people.