In addition to the 2022 roadmap

[Update: The patch notes for the Invaders update are now live, amid the season 8 pass and Fallout 76 spring community calendar. You can find the main bits below.]

The Fallout 76 team has been busy. Not only are they still actively producing content for the game, they’re also adding in tons of quality of life updates, doing community outreach events: oh, and transferring its core PC service from the Bethesda Launcher to Steam. Full plate! And you can get a glimpse of how full it really is in their new Season 8 blog update; which also details the Fallout 76 spring community calendar.

First up: Season 8, with 100 ranks. The new reward track kicks off today, and it’s coming with the major March 1 update. Instead of going with a dramatic radio play or a Buck Rogers motif of some kind, this one is planted firmly in the safe vault.

Here’s the gist of the theme: “Revisit a simpler time to follow along with other Dwellers as they live out their daily lives inside one of Vault-Tec’s many cutting-edge subterranean facilities. Follow along as our heroic Dwellers go on the hunt for a covert communist, find out what happens when the Overseer develops a case of amnesia, experience an impassioned love triangle that will tug at your heart strings, and more during Fallout 76 Season 8.”

Once “advancement” lets you buy up multiple levels of the pass at once (like most season passes, but I use advancement in quotes because buying levels in a pass is still weird in a game that originally wasn’t going to have transactions impact gameplay). Rewards include an exercise bike at level five that directly lets you increase your endurance temporarily, a chemistry station for crafting, and Sam Nguyen, an ally. So all gameplay-impacting stuff. 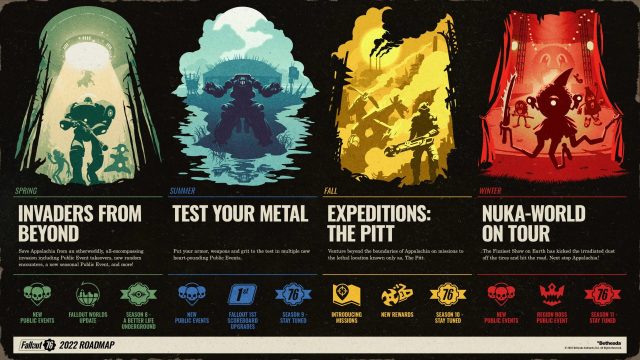 Then there’s the 2022 roadmap reminder, which we reported on last week. We’re on the “Invaders from Beyond” block right now, then in the summer there’s Test Your Metal, then The Pitt in the fall, and Nuka-World on Tour in the winter.

Since things are subject to change and updates can be pushed back, there’s no specific dates outside of Invaders from Beyond, which is out today. 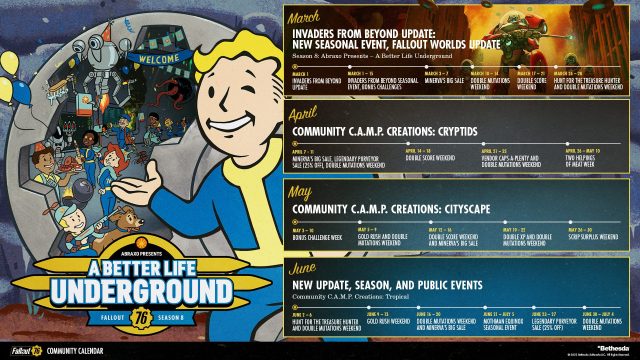 And running concurrently with the season stuff is the Fallout 76 spring community calendar.

It’s basically a recap of events like “double XP” [score], but laid out in a really clear way ahead of time. Upcoming highlights include the double XP weekend on March 17-21, as well as March 24-28, which is a double-event weekend (hunt for the treasure hunter and double mutations).

Version 1.6.2.15 Invaders from Beyond patch notes

Check the download sizes below for today’s patch on your platform of choice: