Or, how the population of Silent Hill desperately need some parenting classes

The past week in games has been all about strong, imposing men getting in touch with their softer side and nurturing their young – well, and cardboard boxes. Both Kiryu Kazuma in Yakuza 6 and Kratos in God of War may not quite be rocking the dad bod, with milk stains and baby sick down their ratty old t-shirt and heavy bags under their eyes, but they do learn a thing or two about how tough life as a father is. Overall, the impression I’ve gleaned from promo material for both games – I own neither, since I’m drowning in my backlog as it is – is that the protagonists fall into the massive pile of flawed father figures who are interesting to study but can hardly be reviled. Even if Kratos was an absolute bastard in God of War III.

However, some in-game portrayals of the parent-child relationship (note: I am not limiting myself to biological kin here) are so black-and-white appalling that it’s safe to label the dad as a complete failure. Games are not short on blokes who commit felonies against their offspring and violate all paternal moral codes on a regular basis. Frankly, the average video game dad at least tries to look after their youngsters, and that’s a damn sight better than what this scum bucket collectively musters when it comes to their kids.

So, who are these terrible fathers? I can think of five who are on my blacklist, and none of them have a shred of decency about them. Except the last entry, who in retrospect is nowhere near as bad as the others. Come on, dudes, it’s Sunday – I had to find some space for a little bit of light relief in an otherwise sickening list.

Warning: as well as containing heavy spoilers for a number of games, this list includes a game that addresses child abuse and suicide. If this is likely to cause you distress, please stop reading here.

1. Marty Armstrong, LISA: THE FIRST and LISA: THE PAINFUL

Marty is a thoroughly ugly person, both inside and out. He is the father to the eponymous Lisa and to Brad, who is the deuteragonist in LISA: THE PAINFUL. The events of LISA: THE FIRST, a prototype RPG maker game developed by Austin Jorgensen (probably my favourite one-man-band developer out there), cover Lisa processing the abuse she experiences at the hands of Marty.

LISA: THE PAINFUL certainly lives up to its name, with the start screen being a pixellated image of Lisa hanging by a noose. This is not symbolism – it’s canon for the series that Lisa was so tormented by the abuse she experienced at the hands of Marty that she committed suicide. LISA: THE PAINFUL addresses many different themes, but one of them is Brad trying to correct his family’s mistakes and misdeeds when parenting Buddy, a baby he finds who happens to be the only girl left in society. It’s clear that the beatings he suffered while under Marty’s roof and bearing witness to Lisa’s suffering broke him, and he is committed to making sure he doesn’t fail Buddy because of this terrible past.

The story is deeply upsetting and will probably make you hate Marty more than any fictional character you’ve ever hated before. Jorgensen himself doesn’t give Marty much of a backstory or try to explain why he lashes out, instead just painting him as a revolting slob. And I think rightly so. Since the game is about the ripple effect abuse can have on families, no matter what else is going on in the world at the same time, trying to balance Marty’s character would only detract from the main theme, which is Brad and Lisa’s intense pain and suffering. It doesn’t matter why Marty is abusive. All that matters to Brad and Lisa is that he is.

Shiro manages to be the most evil character in a game about a village’s water supply turning people into demented, animated corpses, so…er…that’s an achievement, I guess?

Shiro is a doctor at the village hospital, who is having a secret relationship with one of the nurses. When she finds out she is pregnant – which she is very happy about, especially because she thinks her and Shiro are a serious couple – he murders her in cold blood and buries the body in woodland. When the siren call occurs that triggers the rise of Shibito, he wakes up in the same woodland, and his ex-girlfriend (“ex” because he’s an absolute monster with no soul) has dug herself out of her makeshift grave.

You might think that’s bad enough. Oh, no, my dear reader, it sadly gets much worse. When he finds the Shibito versions of both his ex-girlfriend and her twin sister, who’s come back to the village from living in the city to look for her sister, he experiments on their corpses to see how much pain Shibito can endure. He then murders his own twin brother, who is a priest, and dresses up as him for an entire act of the game, with the player being none the wiser. There seem to be a lot of twins in Forbidden Siren – must be something in the water.

I’ve counted Shiro as a terrible dad because even though his girlfriend hadn’t even given birth yet, she was very much looking forward to their lives together. That compared with his heartless desecration of her body and of their unborn child after her death makes me shudder to think what would have happened if he had become a father. Absolutely for the best that he perished along with the village. 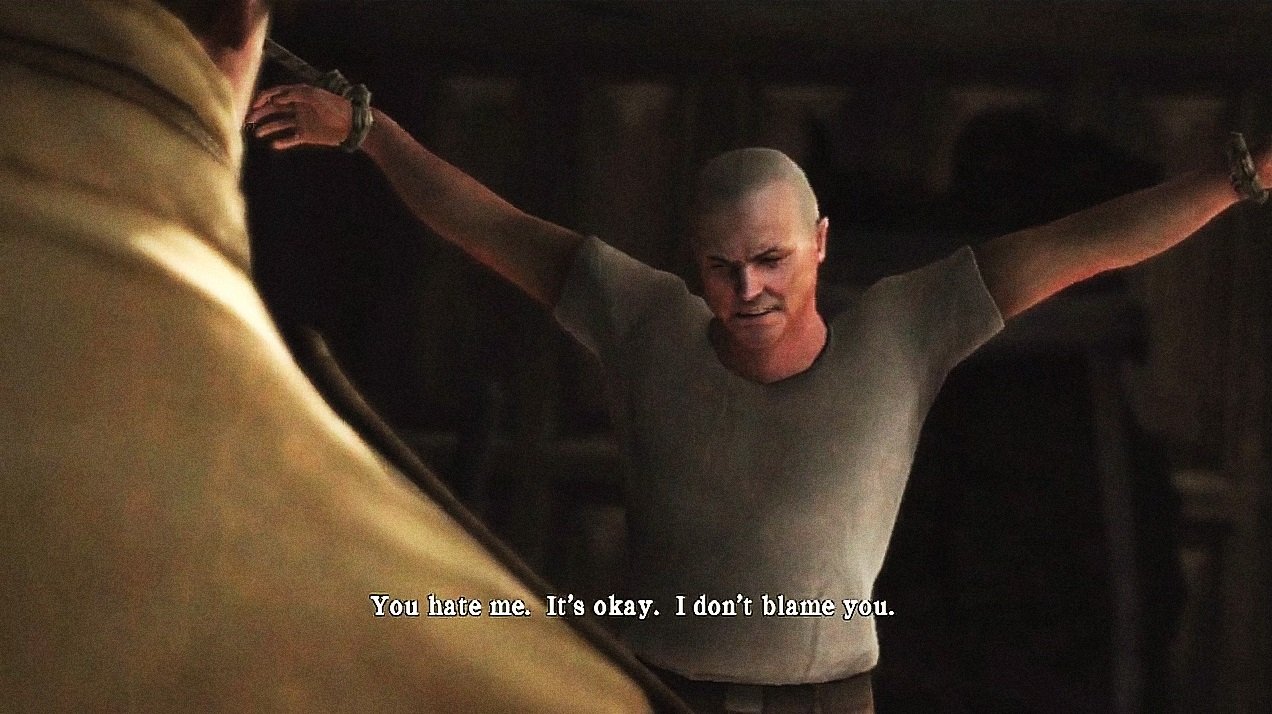 A few ground rules with religious death cults, here: don’t inflict your death on unwilling participants, and do not drag children into your death cults. I think the Silent Hill series frequently misses the memo on this, or rather, sticks its fingers in its ears so hard when the list is being read out that it punctures its eardrums.

While Dahlia Gillespie is probably the most dangerous mother in games, full-stop, Adam Shepherd is an equally hideous creature in many ways. I’m sorry, but if you are the patriarch of a family doomed to sacrifice their firstborn to appease the gods, put something on the end of it. Or if you’re under pressure to have children, leave. Go into hiding. Do precisely what Harry Mason did in Silent Hill 3. The cult still caught up with poor old Harry (best dad 10/10), but anything is better than being compliant with a wholly immoral order from above. Particularly when it means raising a child for years and years, all in the knowledge they are going to die at your hands one day. Then again, reasoning with people in bona fide cults can be more than a little tricky.

Yes, Adam didn’t end up going through with the sacrifice, because it second-born died in an accident. But he treated Alex like dirt his entire childhood, because he was “the chosen one” and he didn’t want to get too attached to the son he would have to kill. What kind of sick attitude is that? Again – just run away from Shepherd’s Glen, and run away from Silent Hill, instead of raising a human being like cattle to be slaughtered.

There are a lot of strange family dynamics going on in the Resident Evil universe, and more than a couple of flawed father figures. But most of them reach out to help someone, or think they are doing the right thing, at least, and it comes back to bite their family. None put the wellbeing of their family on the line as much as the Birkins in Resident Evil 2.

Sure, George Trevor installed his family in the Arklay Mountains while he worked on the infamous Spencer mansion, but he didn’t know his wife and daughter would wind up being test subjects – it seemed, on the face of it, like any other contractor job. Sure, Jack Baker raised a psychopath son who left his friend in the attic to die, and then brought in from the swamp the girl that would change his family’s entire fate, but he was struggling to raise an unruly son, and it’s fair to presume what looks like a young girl washed ashore is a young girl washed ashore. Birkin, on the other hand, worked with chemical weapons while raising a young daughter, and valued his research so disproportionately that he injected himself with it once shit hit the fan with Umbrella.

In his mutated form, he lost self-control and wanted to spread the G-Virus by implanting an “embryo” in his daughter, Sherry (which is still one of the most disturbing things I have ever heard in games and I am surprised that didn’t get taken out or modified in localisation). It’s true that once he’s a hulking beast, he can’t exercise self-control and has lost his moral compass. But he knowingly put himself in the position, putting his daughter in harm’s way, because he was too proud to let his research project be seized. A pretty cowardly man, and I would say Claire and Leon acted more like loving parents to Sherry in their few hours of custody than the Birkins ever did. 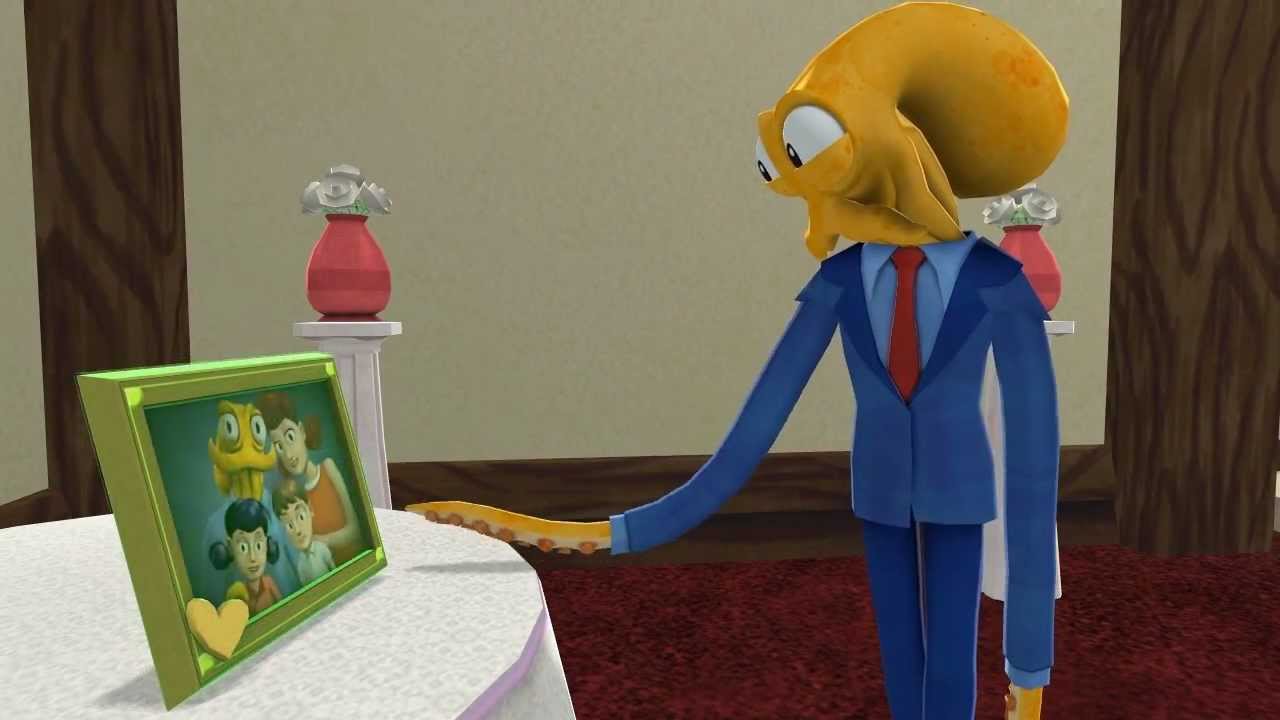 So far, the list has been a harsh indictment of video game dads. So I wanted to showcase how fathers can seem doting and lovely, while something stinks under the surface. Like rotting seafood, perhaps?

The lovable Octodad is an octopus in a suit, who has somehow managed to con the world into thinking he is human. He goes shopping for his family, grills them burgers and reads the kids bedtime stories, all without anybody suspecting a thing. Sure, he’s caring and clearly loves his family, but if he truly loved them, he would be honest, instead of living a double, deceitful life.

Plus, I bet he’s voiding all sorts of terms and conditions in his life insurance policy by not telling them he’s a FUCKING SQUID. Dooming his family to financial instability on his death – nice one, Octodick.

Did I miss anyone off the list? Do you think I was too harsh with any of the entrants? Let me know in the comments down below!