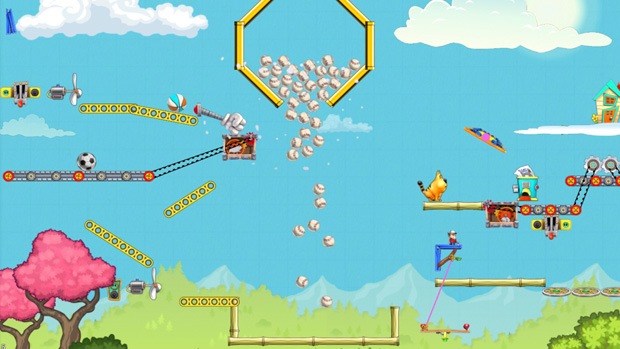 It’s been just over a year since I told you about Contraption Maker, a puzzle game in the vein of the DOS classic The Incredible Machine that’s being worked on by some members of the original development team including Jeff Tunnell. Since we last checked in, the title released on Steam Early Access and now, as of this week, is ready for the masses with version 1.0 for PC and Mac.

Contraption Maker is $14.99 on Steam and that includes two copies — one for you and a friend. “Just because we are out of Early Access now doesn’t mean that work on the game is stopping,” wrote Spotkin. “We will continue to have regular updates to the game that will add new puzzles, new features, new parts, and improve upon the usability of the game.”

Developer-made levels are included to get you started, but I have a feeling Contraption Maker will be at its best with community levels, which are shareable by way of Steam Workshop.