When Team Bondi and Rockstar Games set out to make the great undertaking that was L.A. Noire, they chose to explore many gray areas of gaming which are most often hidden away from the all-consuming hype and limitless budgets of your average AAA production. Choosing the path less followed, Team Bondi opted out of the normalcy of today’s inundated market with fast-paced action gaming.

The final product being a slow and methodical yet harrowing detective tale interlaced with frequent police chases which often culminated in a crescendo of violence worthy of the Rockstar name. Given the success, it came as no surprise to me that it would be receiving the inevitable port to a PC near you. So how does the Cole Phelps experience fare when brought to a keyboard and mouse? 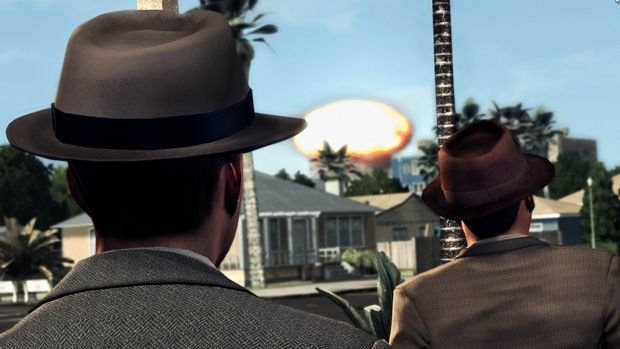 Not too long ago I had the pleasure of sitting down with Rockstar Games to put L.A. Noire through the paces on their seriously beefed up PC. Given that the system I was able to play the game on could most likely be used as a down payment on a mortgage, the game ran smooth and stutter free — but how will it run on a PC which exists in the realm of reality?

If Rockstar’s recently released system requirements are to be believed, it should run quite well provided your graphics card meets or exceeds the minimum of a Geforce 8600 GT 512MB, Radeon HD 3000 512MB or better. If you still need some extra incentive, L.A. Noire: The Complete Edition will come complete with a multi-use code which will unlock all previous downloadable content for the game at no cost to you.

The case which was available to me, entitled “Nicholson Electroplating,” started off with a bang. Literally, with a bang followed by a large mushroom cloud in the distance. After stealing a fire engine, I raced to the scene of the disturbance with my partner who continuously reminded me of how idiotic we looked cruising the streets of Los Angeles in a giant red fire truck. Upon arrival, a scene of chaos and carnage would herald the beginning of my first investigation sequence. As if I had never missed a beat, that familiar L.A. Noire jingle brought out the super sleuth in me. With that, I was ready to make a fool of both my self and Cole Phelps by failing every interrogation from here on out. 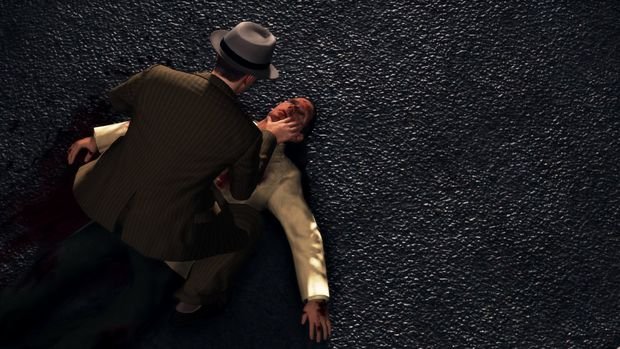 Visually, the experience is just as engaging as the game’s console counterparts, though the lips and ears did, at times, have a slightly blurred appearance to them. I would normally pass this off as a minor nuisance were it not for the fact that the clarity of facial expressions is so paramount to the gameplay.

Those of you with access to a 3D-enabled monitor are in for a special treat as L.A. Noire not only supports 3D, but it implements it beautifully in a manner which succeeds in the subtle application of 3D imagery in nearly every scene without shoving it down your throat. The 3D visuals truly shine, especially during your time at the arson desk where the smoke spewing ashes of every crime scene jump out at you quite brilliantly.

When I first begin a game which has been ported to PC, I generally begin my journey in the options — specifically, in the settings menu. If I find myself staring at a picture of an Xbox 360 controller and it boldly informs me that my left mouse button is in fact a pressure sensitive trigger, I often take it as a portent of the not so good times which likely await me beyond. In short, does the I/O scheme properly represent that of a PC, can I customize my keys, and will it inform me that my PC’s subscription to Xbox Live has expired (I’m looking at you Modern Warfare 2)? 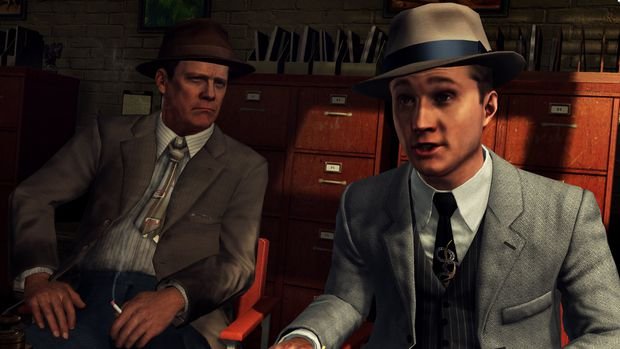 After initially inspecting L.A. Noire, I nearly launched myself from my seat in raucous revelry as my concerns were not only abated but downright obliterated when it became apparent that Rockstar had scrubbed nearly all heretical references to the dark console origins. It’s not that consoles are bad, there’s just been this almost lazy habit where console versions are influencing the UI design of their PC counterparts with limiting results.

If you have had the pleasure of groping dead people on either the Xbox 360 or PlayStation 3, your first hour or so on PC will most likely be spent familiarizing yourself, yet again, with the ins and outs of the controls. Admittedly, I had a rough time coping, especially in regards to the cover system and driving, with the new keyboard and mouse control scheme. Once that obstacle had been defeated, I fell back into the role of Cole Phelps as if it were a perfectly fit glove.

For many PC gamers, the gun play will have improved with this version since you are no longer required to free aim with your thumbs. Conversely driving using the WASD keys has always been limiting; keen maneuvers requires the precision offered by a standard controller. All in all, if your preferred method of gaming is by PC you will be pleased with the final outcome of Rockstar’s lone toiling.

Regardless of your individual feelings for L.A. Noire, the game represents a milestone in facial performance for videogaming which will contribute tremendously towards mainstream recognition of games as more than the products of the musings of men who sell electronic toys to adult children. It’s breakthroughs such as these which help cement modern gaming’s claims as this generation’s great art form.