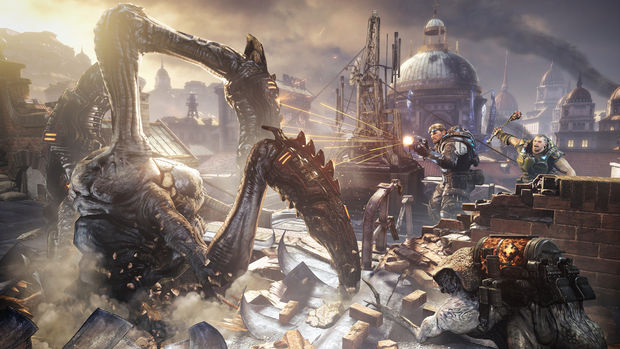 Gears of War: Judgment is the latest in the Gears saga, and with it comes a really fun new multiplayer mode called Overrun. The mode sees a team of COG players defending a generator, while a team of Locust players has to destroy the generator. After the round is over, teams switch sides and the team that was able to destroy the Generator the fastest wins.

The big change here for Gears players is that the characters in Overrun are class-based. (Think along the lines of Team Fortress 2.) The key here is that you’ll need to really work with your team as classes are able to strengthen and enhance each other during matches.

Overrun is a five-versus-five setup, with COG players being able to choose from four different classes. The Engineer (Damon Baird, in this case), can deploy an auto-sentry gun and fix fortifications. Scouts rock out with a sniper rifle, can climb up on areas no one else can, and deploy grenades that send out a pulse to show where enemies are within the pulse range. You can even see Locust through walls if within range. Soldiers use the Boomshot, and deploy ammo to resupply the team. Medics heal, and throw down a stem gas grenade that heals/revives anyone in the vicinity.

The Locust side has some more diversity in the lineup, with at least eight different types playable. Corpsers can burrow underground, the healer does this crazy dance thing that heals anyone nearby, and there was a big heavy Locust dude rocking a giant shield and flail. I spent the most time with the Ticker, which is kind of a combination of the two Tickers from Gears of War 3. Lead producer Chris Wynn described him to me as a “Super Ticker.” I was crawling under buildings, using its new sprint ability to run around and then explode on COG soldiers.

Epic brought just a small taste of Overrun out, and from here they’re going to start playing with the maps, weapons, and how the rest of the mode will work for the 2013 release of Judgment. Wynn told me some history with Overrun: they’ve been playing with the idea since Gears of War 3. They wanted to include it in the last game, but they “couldn’t make it work” at the time. So when they started work on Judgment, they went back to the idea of Overrun, “and took another stab at it [to] see if we can make it work.”

Pretty fun, and pretty simple. I’m not the biggest Gears guy, but I really loved the class-based combat and fast-paced nature of it all.