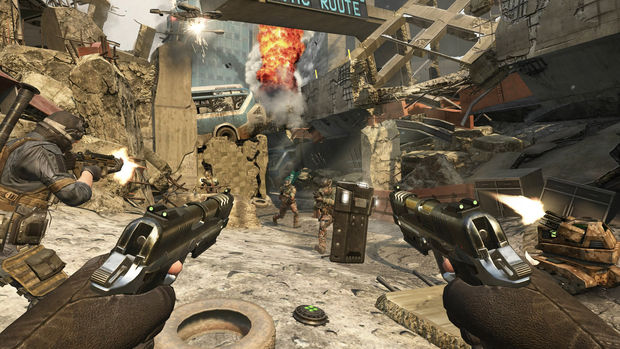 One of the bigger announcements at today’s Wii U event was that the upcoming Call of Duty: Black Ops II will be making it to Nintendo’s next home console on November 13. So is there a good reason why you should get the Wii U version of Black Ops II over the PlayStation 3 or Xbox 360 versions? Well, maybe not, but by the same toke, there isn’t a reason you shouldn’t buy it on the Wii U either.

The Activision reps at today’s Wii U press event in New York City made it clear that all the features found in the other versions of Black Ops II will be present in the Wii U version. Basically, it’s essentially the same product.

What the Wii U brings to the table is more controller options, including the Xbox 360-style Wii U Pro Controller, the Wii Remote and Nunchuck style found on prior Call of Duty titles on the Wii, and most interestingly, off-TV play on the Wii U GamePad’s touch screen. I gave the game a spin on the GamePad controller to see how it felt.

Playing the game on the Wii U GamePad felt seamless and smooth. I detected no lag between the TV and the controller screen. The picture on the GamePad screen was as crisp and clear as on the TV, with no diminished frame rate or other visual hiccups apparent. There was no firm details on how far away from the console you could go with the controller and still keep a solid game going, but I was told that the GamePad will make it possible for some to take their games of Black Ops II with them into the kitchen while they’re waiting for their bacon to fry, or to the bathroom while waiting for their “eggs” to drop. It’s the exact same experience as the home console version, but with some limited portability for no extra charge. Hard to find fault in that.

The GamePad also opens up options for local multiplayer. Lets say you want to introduce someone to Call of Duty who’s not used to “traditional” dual analog controls. They can play on the TV using the Wii remote and Nunchuck, while you join in on the game with the GamePad, utilizing dual analog stick controls, showing support (or hostility) toward your fledgling pal along the way. For those who only want to play Call of Duty without being hampered by any local human interaction, these features may sound meaningless, but for those who’d like the option to dabble in some off-line socialization while playing the most popular FPS on the planet, the Wii U port of Black Ops II has a lot to offer.

If you’re one of the people out there who either shares the “family” TV with other members of a household, or live in a home where the sole videogame console is tethered to the living room, then Black Ops II on the Wii U could be what you need to take control of when, where, and how you play Call of Duty.