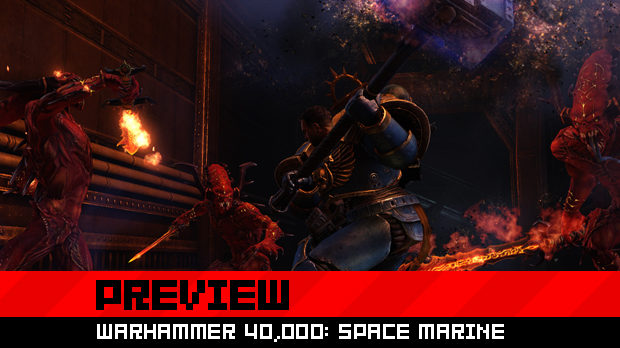 The latest game in the Warhammer 40,000 series is taking players in a new direction with Space Marine, a third-person action-adventure title. You play as Captain Titus of the Ultramarines chapter, a genetically modified superhuman soldier equipped with powerful armor, badass weapons and a chainsaw sword.

Your task is to defend a vital Imperial Forge World home to powerful weapons of war, including the devastating Titan superweapons. Orks have invaded the planet, and you’re all that stands in the way of total annihilation. Think Gears of War but with less hiding and more action. A lot more action, in fact. You’re a super soldier who isn’t afraid of getting right into the thick of it.

As promising as an action-adventure game where you use a freaking chainsaw sword sounds, I’m sad to say that Space Marine didn’t really wow me.

THQ wasn’t really letting us get into the story beyond the basic plot outline that I described above, which was a real shame. To me, story is key when it comes to these types of shooters, especially since the market is flooded with them. I need to be engaged by the story — otherwise, what’s the point of investing my time and money into a game? And of the snippets I did get of the story, none really impressed me. I did, however, really like the voice acting. The soldiers all speak Old English, like Thor from Avengers: Earth’s Mightiest Heroes.

Moving on to the combat, it’s a seamless mix of melee and shooting. You’ll find yourself engaging anywhere from 15 to 30 Orks at a time, and the fearless creatures will run right up to you. There were multiple choke points where I shot enemies in the distance while switching fluidly to my chainsaw sword against enemies that came straight at me. 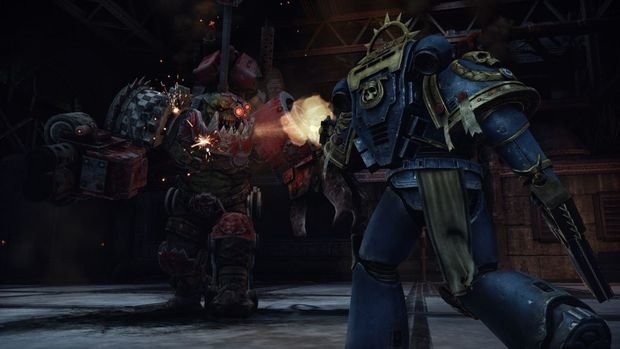 You have a normal and strong attack with the chainsaw sword, and you also have a Fury meter, which, once filled up, will allow you to unleash a powerful melee attack or slow things down bullet-time-style for your guns. Honestly, I found myself having more fun swinging around the chainsaw sword than shooting. I think it had something to do with the fact that I was using a sword that is also a chainsaw.

Additionally, you have an evade move as well as sprint and tackle abilities. You’ll also be able to perform brutal execution moves. Your hero has a shield on top of regular health, both of which regenerate over time.

The only thing holding back the combat is the camera. The camera pulls in really close to Titus, which would be fine if this was just a shooter. As melee is a big factor in the combat, I often found myself lost in the confusion of battle due to the camera pulling in too close; I was sometimes unable to see my character. 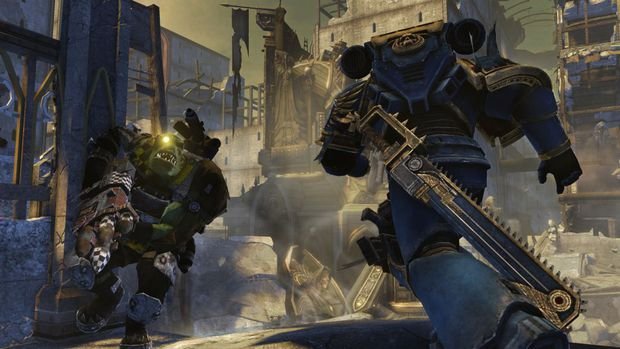 The visuals are hit-and-miss, too. I loved the character designs for all the races. The Space Marines look as badass as they should, the Chaos class definitely looked fearsome with their devish looks and lightning-like reflexes, and all the various Orks all looked distinctive. The Gothic architecture seen in the majority of the environments off in the background was well designed, too. It was areas that saw me in buildings/close quarters that felt very generic. Only one of the four levels felt like it had some life and attention to detail.

Note that what I saw was all pre-alpha gameplay; a majority of my complaints, such as the combat and environmental design, can be addressed between now and launch. I just hope there’s a lot more to the story that will bring people in. I’m sure Warhammer 40K fans will eat the game up.

For the general consumer who’s not familiar with the Warhammer 40K series (like myself), we’re in a year where we’re seeing a number of established shooters such as Gears of War 3, Uncharted 3, Battlefield 3 and more coming out — there’s just not much to entice Warhammer 40K newbies and draw them away from those heavy hitters. I’m definitely not ready to write this game off completely, though, and want to see if anything is improved come this June at E3. Plus, we haven’t even seen anything of the multiplayer yet.

Filed under... #Destructoid on assignment#THQ