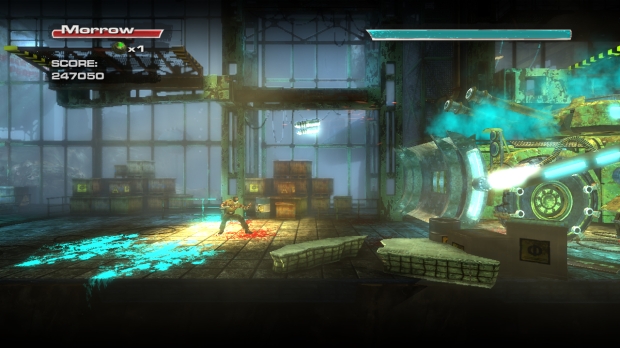 Rush’n Attack: Ex Patriot has a major problem when it comes to plot. You see, it’s not the late 1980s anymore, so the rampant fear of Soviet Russia doesn’t hang over us like a red curtain. So Rush’n Attack: Ex Patriot addresses the Russian element by returning to the Tunguska Event in Siberia. Apparently a massive explosion took place in this remote area, which many consider to be from a comet. According to Rush’n Attack: Ex Patriot, this 1908 event left behind a rare element that is the source of some major, modern-day problems. Some American soldiers are aiming to save one prisoner who has been held in this area for ten years, and unfortunately, main character Sergent Sid Morrows is captured in the process. Tested upon, he’s now immune to the side effects of the interstellar element that is radiating everywhere, and it’s his job to escape and save anyone on the way.

Upon initially playing Rush’n Attack: Ex Patriot, the first thing to pop into my head was that the game is a melee-focused version of Shadow Complex. Well, it’s not. While Rush’n Attack: Ex Patriot may look like it offers an open world, Metroidvania-style levels and all, instead there is a much more linear experience. While these three levels can be completed in different manners, such as sneaking through the air ducts or blasting straight ahead, they generally end up in the same area. However, along the way there are plenty of traps that players can hide into, whistle to call an enemy over, and slaughter on sight. The enemies themselves have some defenses on their side, as security cams call over more units to fight, and while they don’t do much damage one-on-one, they can pose a problem in groups.

Personally, I’m finding the focus on gruesome knife kills, splattering of neon blood, random awesome slaughterings, and the stealth mechanics lend some flexibility to play. You can focus on tactically moving through levels, or you can charge ahead, as the game rewards both thoughtful executions and the quick kill combo session. Guns like rocket launchers and machine guns can be picked up, although they tend to have short supplies of ammo, and you’d best learn to rely on your knife. Sid can be upgraded and will learn new combos as he progresses, using his score as the XP for leveling up.

In the end, I’m finding that Rush’n Attack: Ex Patriot is the right little update to the franchise. It doesn’t seem to massively mix things up and change the nature of the game, and the 2D stealth mechanics are always fun and satisfying. It’s not a radical change of play, but it’s enough to keep the franchise fresh. Rush’n Attack: Ex Patriot will be coming out later this year for PSN and Xbox Live.