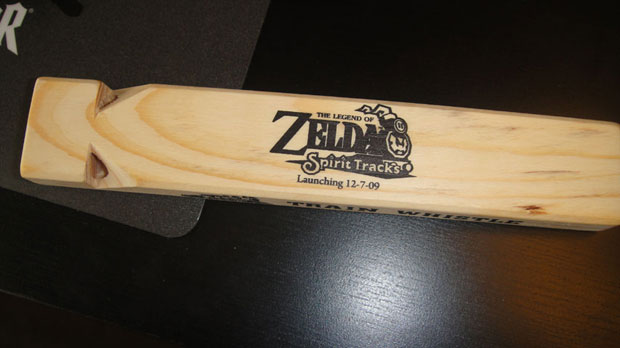 Along with a USB stick containing the opening of the upcoming Nintendo DS title The Legend of Zelda: Spirit Tracks, Nintendo sent me a wooden train whistle. Oh, and there were also some pretty neat pieces of artwork on the USB stick, too.

But what you’re interested in is the train whistle. So I put the rest of today’s work aside to spend some hands-on time with the train whistle, just for you guys. We’ll have an updated preview of Spirit Tracks soon, but you want your train whistle coverage as soon as possible, and far be it from me to keep you from it.

Once you’re confident that you’ve acquired enough wooden train whistle knowledge, hit the jump for the opening “cinematic” from The Legend of Zelda: Spirit Tracks, which hits stores on December 7.

Filed under... #DS#DSi#The Legend of Zelda