One of the few action-RPGs that really caught our eye at Destructoid this year was Kingdoms of Amalur: Reckoning. Where most games of this genre focus on heavy action and light role-playing elements or heavy role-playing with a somewhat broken combat system, Reckoning seemed like a title that didn’t just sound great as a concept, but looked good to boot.

Whereas potential for a game is one thing, being able to give it a go yourself and seeing if it passes the test of a set of critical eyes is another thing altogether. Luckily, Reckoning is set to be on a path that may just surprise the most critical and jaded of action and action-heavy RPG fans. 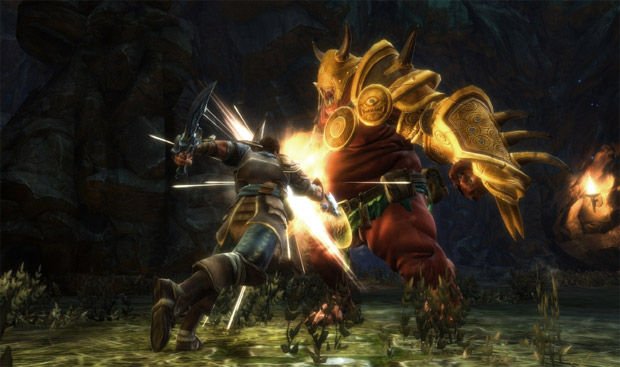 In a fantasy world thrown into a brutal war, the player dies and is resurrected by the Gnomes’ Well of Souls. Conveniently, you receive the breath of life at the cost of all your skills and the ability to remember what you looked like. With a choice between four races and a Mass Effect-like character customization menu, you’re ready to create your own destiny.

Not only are you the first to actually be resurrected through the arcane process, but it has torn you free from the tapestry of fate. As you set out on a quest to find out exactly what happened, who resurrected you and who might have more information, the first (single-player) installment in the new IP sets you loose in the world of Kingdoms of Amalur. With five regions filled with large cities, villages, six different factions impacting the world, and around 120 handcrafted dungeons and tons of sidequests, Reckoning is surely not lacking in ambition.

Like in Fable or similar action-RPGs, you can more or less walk around the world and do whatever you want. Whether that be pickpocketing innocents who might get you arrested for committing a crime, creating potions through Alchemy, crafting armor through Blacksmithing, or creating gems you can socket into equipment using Sage Craft, Reckoning is far from the hack & slash game it might have looked like when it was announced. 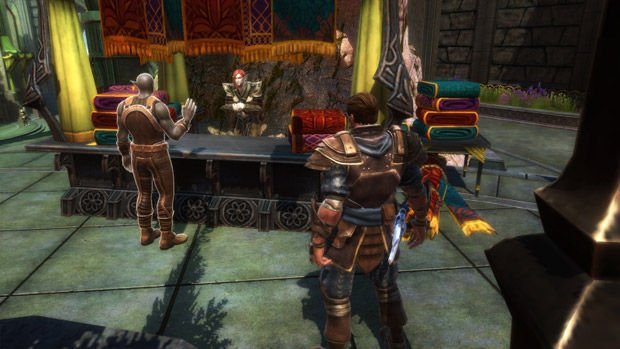 Destiny is what one might call the class system in Kingdoms of Amalur: Reckoning. Instead of choosing a class and leveling up stats that fit that particular class, the Destiny system throws this concept on its head. During the game you can put points in one of three categories of combat skills: Might, Finesse, and Sorcery. Different Destinies require a specific combination of sufficient points into these three categories.

Given the choice between playing a melee warrior and a mage, I went for the spellcaster to take a closer look at the combat system. One that works surprisingly well for a third-person game of this genre with so much to do in the open world. 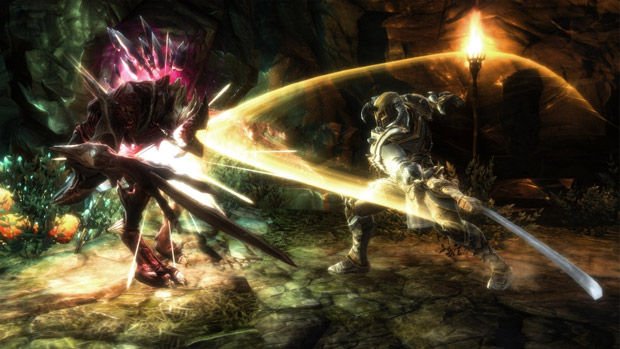 When you enter combat, the camera shifts into a slightly different view. Two face buttons are used for your default weapon attacks, with the other two face buttons reserved for dodging and interacting with the word. Every Destiny uses different default combat attacks but once you hold down the right trigger, all the face buttons can be tapped for special abilities and held down for stronger or area-of-effect versions.

This system is pretty deep for the assassin and mage Destinies that were being shown. The mage can tag enemies by holding the right trigger and pressing Y, for instance, and then immolate all the tagged enemies by holding down the Y button. Likewise, doing this with another button can shoot a bolt of lightning while holding it down summons a lightning storm.

It’s a system that allows for a lot of different attacks and although it did take some getting used to at first, it should be really easy to get into if you grow into it from the beginning of the game.

In case you become overwhelmed, you can either dodge out of the way or bring up a radial menu for potions that slows down time. If you are someone who likes to really dive into the action with a more combat-heavy character, a few brief QTEs here and there can land you some satisfying finishing moves to boot. 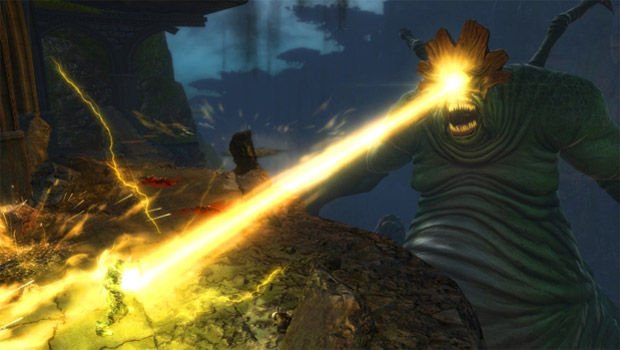 EA’s influence as a publisher seems to have gone well beyond simply acting as the distributor for the game, with not just the character creation system taking a lot of nods from Mass Effect but even a conversation system that seems to have been lifted straight out of BioWare’s latest RPGs. It’s a bit of a shame that the typical “Paragon” and “Renegade” style of answers are still located on the top-right and bottom-right, though.

With talent of the likes of R.A. Salvatore, Todd McFarlane and Ken Rolston on board, my expectations for Kingdoms of Amalur: Reckoning were high but tempered by not having seen much actual gameplay. After witnessing how far 38 Studios and Big Huge Games are taking the amount of things you can do in the world — from crafting to configuring your skills and choosing up to 40 different Destinies, as well as the combat system that should allow for a huge amount of replayability — these expectations have risen at least tenfold.