When EA announced Darkspore earlier this summer, the fusion between Spore’s character customization and a Diablo-esque RPG set in space makes for an interesting set-up. Last night, we had the chance to see how the game’s PvP elements are coming together, and while Diablo and Torchlight clearly have inspired the game, there’s enough here that makes the multiplayer unique and worth playing.

[And after you do, be sure to check out Jonathan Holmes interview with Darkspore‘s Creative Director, Mike Perry. You’ll love it, I swear!] 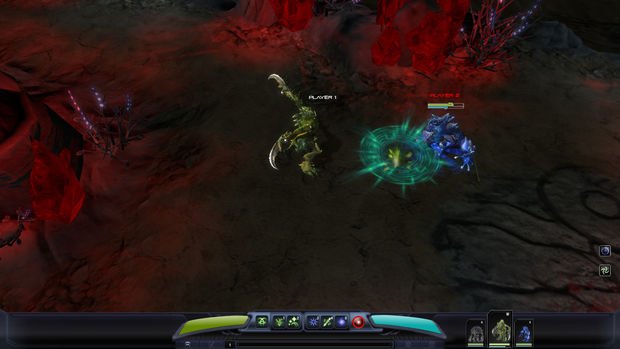 Like most of these types of games, players will want to go through the single player campaign first before jumping in head first and trying to take real players on. This is important, because the single player is where new recruits will be found, as unlike the main Spore game, you wont be able to build an alien from the ground up. However, you can add all sorts of parts to customize your aliens to suit your look and stats to basically any position on the aliens’ bodies. One thing the team is addressing is the ability to de-spec the equipable items, so if players want to have something that looks cool but does nothing, they can do that.

After a solid amount of single player time, players are expected to have numerous squads of alien fighters. Squads are made up of three aliens at any given time, and it’s expected that a good squad will have a well-balanced team. I had a huge brute of an alien with a laser gun and some tank abilities, a spindly fast alien with large claws, and a green thing that focused on projectiles and healing.

When squaring off against another player, players will want to switch out to best address the most immediate threat. Fighting against a tank character, you’ll want to focus on immobilization and distance attacks, and if a healing character comes out, being fast will be a major advantage to you. Characters can be switched out any time, with only a minor cool-down. All in all, it actually feels somewhat like a real-time Pokemon game, if that makes any sense. 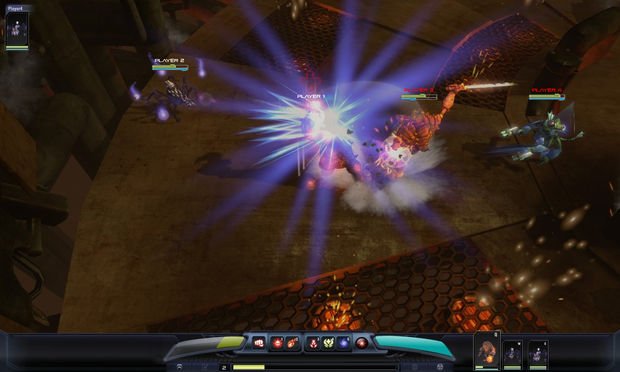 Unfortunately, if you are looking for massive instances with multiple players, you’ll have to look somewhere else. PvP is one-vs-one or two-vs-two only, and that is the only option. Thankfully, the PvP arenas are of a small enough size, that this isn’t too much of a problem. The arenas themselves have environmental hazards, such as fire shooting up from the floor.

Ultimately, it looks like PvP will be a fun little addition to Darkspore. I think there needs to be a bit more to it to make it the hardcore multiplayer mode people might better like, but it’s an addition that suits the nature of the game. I suspect the campaign, which can support up to four players in AI directed levels, will be where most players spend their time, but using their best fighters in a battle is something many gamers wouldn’t pass down.