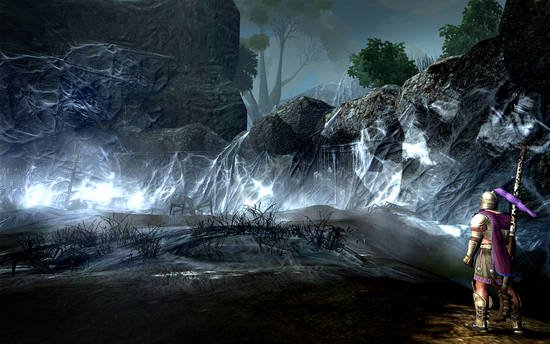 That line is a quote from a classic film, and yet sadly it is also used as a hook for a story all too often. Being the eternal pessimist that I am, I immediately braced myself for the worst while stepping into the world of Funcom’s massively multiplayer online game, Age of Conan: Hyborian Adventures. Oddly enough, though, as I continued to wander through the storyline and explore this new world, I became less skeptical of that overused plotline. It seems that Funcom did a fairly good job of incorporating that beginning into at least the first six levels of the game, as you go through chasing down your former slave master with the eventual goal of having your slave shackles removed.

Once this little slave subplot is pretty much completed, you nosedive into the real storyline, which can be summed up as:  I was a badass fighter/mage/rogue/priest who got whacked by a bad guy and now I forgot who I am and what I could do before so will have to remember what I could do and what kind of person I was little by little as I progress through the rest of this game! Yay! Run-on sentences rule! This new storyline will guide you through a series of quests that eventually have you departing the starting isle of Tortage, and leaving a few hundred corpses in your wake. Oh yes, by this point you will likely be level 20.

I’ll conclude this “mini-walkthrough” and move on to the rest of my hands-on impressions with the private beta of Age of Conan. But first, a tiny bit of the game’s background…

Age of Conan is set in Robert E. Howard’s fictional fantasy world of Hyboria. Many a novel, comic book and graphic novel have been written about this world and the iconic characters that live in it. Yes, there were the two Conan movies starring the infamous Governator Arnold Schwarzenegger himself, although they didn’t truly portray Conan or his world in all its true gore and glory. Suffice it to say that there are more than enough resources out there to fill an MMO world, and many expansions to come. This is obviously a good thing for us, since this gives Funcom plenty of room to grow and also sets up guidelines and history for them to work into the game’s design.

My impressions of the game were surprisingly positive, considering I was expecting to ridicule it pretty badly. I was not disappointed by the graphics or the audio tracks in the least. The audio actually sounds like something you’d expect to hear in a new Conan movie. The storytelling, the character voiceovers, and most definitely the visuals met my approval.

To expand a bit on the graphics, the game can be visually stunning if your system has the power to play on the highest settings. The flora, terrain, and objects in general were very well done. The character models are well rendered and extremely detailed. And yes, there are many character customization options available when you are initially creating your character in Age of Conan. The closest comparison I can make would be that the graphics remind me of Vanguard‘s visuals, but they are not as resource-heavy for whatever reason. 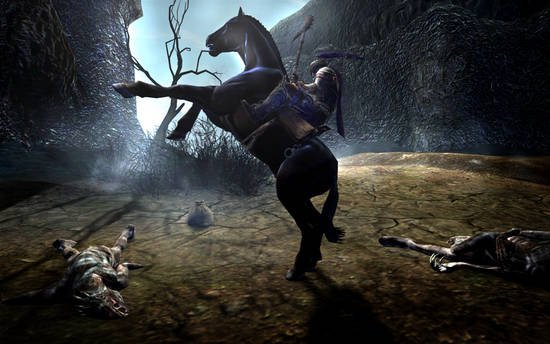 Speaking of graphics, what Age of Conan discussion or review can be complete without mention of it being a game intended for a mature audience? So what exactly do we get to see with the current ESRB rating of M, you may wonder? The answer is everything they had promised in the beginning — RED blood, gore, heads flying off, spraying blood, cuss words, curvy hotties … and did I mention nipples? There had been considerable controversy over this that went on for quite some time. Fortunately for us, Funcom went to bat for our “adult rights,” and after going a couple extra innings in overtime, they managed to get all of those aspects of the game approved by the ESRB with that Mature 17+ rating. Go team Funcom!

The gameplay is very different from many of the MMOs that I have played. The combat system seems far more interactive than other titles, and your skill with the attacks, defenses, and combos were as important as your gear in many instances. Each class has its own particular style and set of combo moves, but in general all classes have to be actively monitoring combat and adjusting their strategies accordingly, or else they will get a nasty case of “dead.” To put it simply, folks, this is not your typical “target mob, click auto-attack, go fetch cup of coffee and come back to find the mob dead” type of game. It does take some getting used to, but it is more than worth the learning curve time investment. Ah yes, the joy of seeing your very first severed head flying off of an opponent. Boo-yah!!

So Funcom took the challenge of bringing Conan’s world to life for our gaming pleasure. The real question, though, is whether they managed to create a playable game that did the legend of Conan justice. During my time with the beta, I was able to reach level 20 and found myself fully enjoying the game in that time period. Now my disclaimer is that the lower levels of any MMO are typically very refined and polished at the time of release, so I can only base my opinions on those first 20 levels; one can only hope that the other 60 are just as developed. 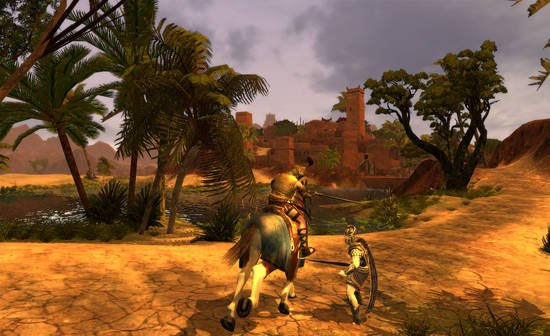 Now, being in beta comes with certain understood problems that I have purposefully left out of these impressions since they are not a true reflection of what the release version of the game will play like (i.e., numerous server resets, lag, frequent patches, etc.). So based solely upon gameplay, the interface, NPC interaction, and general playability, I am inclined to say that Funcom has done a good job of capturing the Conan legend and making it a fun MMO out of it.  Keep up the good work, Funcom, and learn from the mistakes of the various MMO blunders that we have seen in the recent years.

So it looks like Funcom are on the right track to delivering a solid and compelling experience within the Conan universe. In fact, my business partner was so interested in the game that he sat down and coded up a fansite, https://www.aocclasses.com, for it in a week, just so that he could get involved in the game.

Age of Conan is scheduled to hit stores on May 20, 2008 — I look forward to seeing it on the shelves and joining in on all the carnage!