I’m glad Halo is still around. Sure the series hasn’t been the most consistent, and the Master Chief Collection cements the fact that Microsoft is very much willing to dip into the nostalgia pool if needed. But nearly every Halo game has its bright spots. Halo Infinite might be one of the brightest in years based on our time with it.

So here’s what we had access to in full, via the Steam and Xbox preview event:

Let’s start with the battle pass. Looking it over, it seems incredibly typical of what you’d see in the industry currently: complete with a free and premium track. Levels are full of cosmetics (visors, shoulder plates), and armor coloring, and many tiers have two rewards per level. It also sports the occasional premium track XP boost, challenges to boost XP (of the daily and weekly variety), and you can buy track levels with currency (200 credits per).

That’s pretty much all there is to it. We have access to the “season 0” pass right now, with a track that goes up to 20 at this time. While innocuous, the real “killer feature” of the Infinite pass is the team’s commitment to letting people play and complete prior battle passes. It’s just how it sounds: if you get a pass, you own it forever, and it doesn’t go away after a future season debuts.

If Microsoft and 343 stick to this model (they kind of promised it at this point!), it could have a far-reaching impact on the industry as a whole, eliminating the FOMO aspect of passes. It’s also genius, because people are going to go into the armory, see a gun color they like, and potentially want to finish that particular pass they need to unlock it.

Of course, there’s also a shop too, where you can directly buy stuff a la Fortnite. At the moment it seems like the shop is going to be doing daily promotions, with weapon coloring collections, armor coating, helmet and attachment bundles, and XP boosts on offer. How much this storefront will evolve over time (and even during pre-release) is unknown, and I hope it doesn’t encroach upon the goodwill from the season pass system. Given that armor, weapons, vehicles, and even your suit’s AI can be customized, I expect lots of cosmetics by the time this game ends.

Alright, time to talk about gameplay. I began my journey at the Academy to ensure that once I tangled with those bots, I wouldn’t embarrass myself. Here’s all of the guns from our preview period: 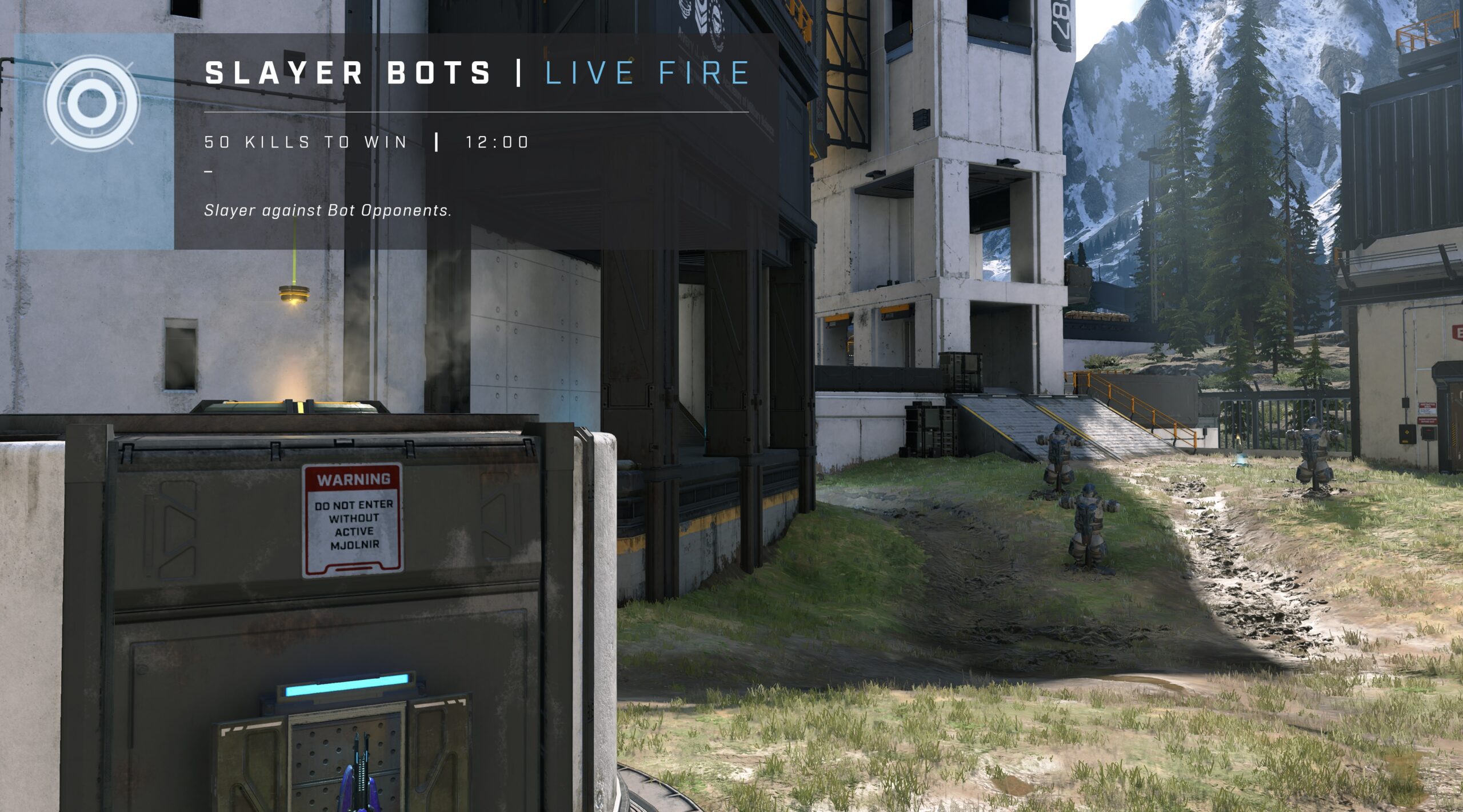 Each individual gun can be taken into the Academy, where you’re tasked with targeting holographic Spartan targets in a shooting range, with an arcadey three-star high score system. It let me get my footing in terms of the control scheme, and it was here that I was introduced to Infinite‘s very smooth controls and aiming system. A lot of Halo staples are back. Jumps are floaty, grenades have that satisfying “clink” sound, you start with a battle rifle, and that adrenaline-pumping announcer returns.

An announcer, mind, that will announce significant/power weapon/item spawns, complete with a countdown timer on the HUD for their spawn locations. Although again, all we had access to was “real players versus bot” matches, it helped create skirmishes and incite conflict when an item would spawn. Drop walls (portable shields) return, as do overshields and active camo abilities.

Halo Infinite‘s pings and voiced character callouts draw from other modern shooters. Player characters will yell “over yonder” (I’m pretty sure I hear Roger Craig Smith as one Spartan type) when identifying an enemy team member, and your AI will say encouraging things like “well ricocheted” when bouncing an energy blast around a corner from the Heatwave to score a kill. You can also tweak quite a few options thanks to the accessibility menu. UI narration (narration of just about everything actually) can be toggled on, as well as heaps of subtitle options (size, background opacity, color mode), recoloring of the entire UI, and the reduction of motion blur, screen shaking, exposure, and speed lines. Plus, the helpful “zone name you’re in” HUD element is still present (see below in the lower left) for team callouts and location identification. 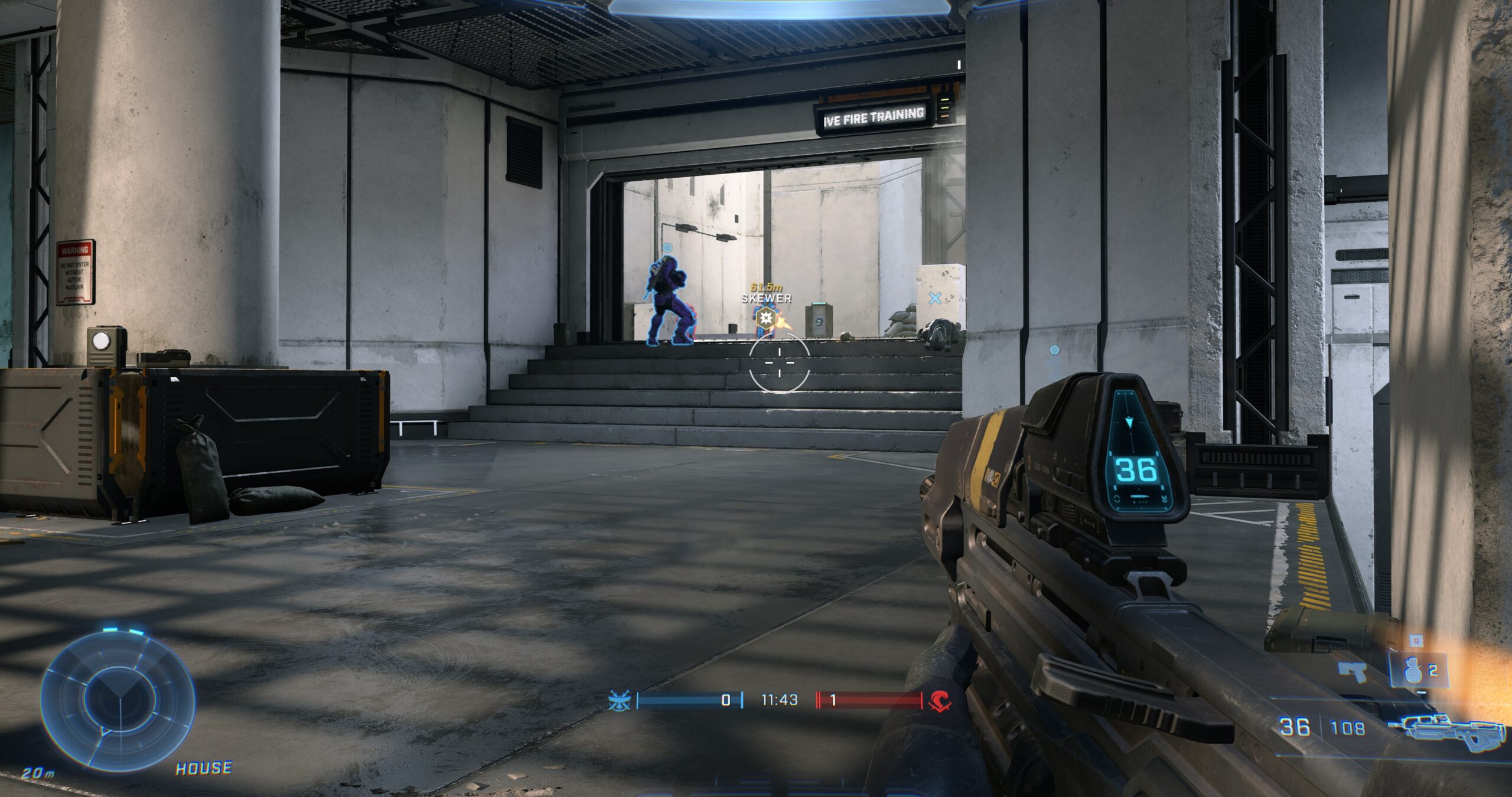 The currently available map, Live Fire, is a tri-lane, two-tiered arena that feels like a masterclass of FPS design. There’s a small network of tunnels below to explore without getting so labyrinthine that you’re losing sight of the action, and the three lanes create meaningful firefights with their simplicity. It feels like something you’d see in a Destiny Crucible rotation, but less bloated and more refined. If all of the maps are this slick, spamming multiplayer matches all day should be fun.

Although my time with it has been limited in scope, I came away happy. Infinite feels like a mix of every era of Halo. If the campaign can bring it and the multiplayer can get people to actually stay in its ecosystem, we could see a glory-day return of the franchise.