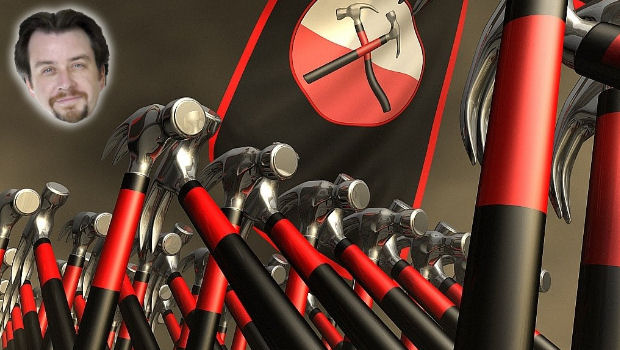 There has been growing concern over Bill S.978, a proposed “Anti-Streaming” bill that seeks to make felons of those who stream live entertainment without the permission of license holders. The concerns have extended to gamers, many of whom enjoy watching live plays of popular games, and now wonder if those who stream could face fines or jail in the future.

Destructoid spoke to Hal Halpin, founder of the Entertainment Consumer Association and long-time gamer advocate, about the bill. He let us know why we, as gamers, should be concerned, what this bill could mean for the future, and what we can all do about it.

I’d like to thank Hal for his time and for chatting to us about what is a very worrying issue.

Dtoid: What does the so-called “Anti-Streaming Bill” mean to you, as both the head of the ECA and as a simple user of the Internet?

Halpin: It’s very concerning. I understand the intent that the legislators and trade associations have with the bill, but it’s so broad that it casts a very wide net, including people who innocently post video captures of their gameplay! Alone, that represents a huge community of people.

Dtoid: Bills such as this one and the California Videogame Law always seem to falter at the first hurdle due to being so vaguely worded. In your experience, why do you think they’re so vague? Is it an attempt to give companies more wiggle room when interpreting a potential transgression, or are they just being written by people who don’t know what they’re doing?

Halpin: I think we’ve seen that bills that are aimed, like in this instance, at IP protection, are developed and shopped to legislators by industry representatives who word them broadly so that the industries have the most latitude in using them. Sometimes that strategy works out for them, other times not so much …

Dtoid: Although the bill was written with film and TV in mind, it seems worded to an open enough degree to include games as well. Do you think gamers should be worried by this? What direct threat does the bill represent to those who stream gameplay via services such as Justin.tv and YouTube?

Halpin: Gamers should most definitely be worried! This bill, as written, will apply to anyone who plays and posts their gameplay online, which is a huge percentage of gamers. It could also apply to pro gamers who stream their gameplay for fans as easily as it applies to companies whose entire existence relies on streaming technology (i.e. Steam, Netflix, Gamefly/D2D, Major League Gaming, EA/Origin, OnLive and Gaikai, etc.).

Dtoid: Do you think streaming videogames does represent a financial problem to publishers in any way? I personally see it was a good form of viral marketing and way to raise awareness of a particular game. Would you agree, or is there any real risk of a company losing sales due to people having seen the content ahead of time? Are companies perhaps putting short-term gains ahead of the long-term potential of allowing more open access to content?

Halpin: Ultimately, I believe that streaming represents far more plusses than minuses for publishers. Are there concerns about piracy and privacy, IP protection and enforcement? Sure, but all of that exists currently. It would be short-sighted and fiscally-irresponsible for them to look at it in those terms.

Upsides for them — not always for consumers, mind you — include, as you said, raising awareness, marketing solutions, renting options, eliminating resale of physical goods, additional revenue models and distribution alternatives … including retail-based ones.

Dtoid: If not the pushing of legislation, what should companies be attempting in order to keep themselves profitable while dealing with the way in which Internet users consume content?

Halpin: Well, they could be concentrating on making more really cool games that people return to play both online and off! But seriously, to the best of my knowledge, none of the publishers/developers or their trade associations are behind or publicly endorsing this bill, and I believe, for the reasons that we’ve discussed — doing so wouldn’t be in their respective best interests.

Dtoid: What are this bill’s chances of passing, and what do you believe the chances are of it appearing again in the future, perhaps with clearer — thus more dangerous — wording?

Halpin: The bill has a good chance of passing this term, and if not this year, it’ll definitely be back next term. Let’s look at it this way: any legislation that has no opposition looks like an easy vote to legislators. If it looks ok on its face, and none of their constituents are against it, they’ll likely vote for it. Simple as that.

Dtoid: Why is it that companies seem so adamant on fighting Internet culture as opposed to working with it? The record industry suffered because it resisted the Internet, and it seems that everybody else is intent on making the same mistakes.

Halpin: I think it boils down to fear. The old-school mentality is to react defensively to new technology and offensively to consumers, assuming that they’re all ill-intended. The RIAA was cut from that cloth in terms of how they reacted a decade ago, and I think you’re right in saying that it cost everyone in the process, industry and consumers alike. What’s clear to me is that the trade and consumers need to work together, and we’re seeing more of that happening … slowly.

Dtoid: What can gamers themselves do to fight against these types of laws if they take issue with them?

Halpin: Gamers can make their voices heard through the ECA and take part in our campaigns against this and other similar legislation, by signing up to our Gamers for Digital Rights working group. They don’t necessarily need to be members of the association to join and they’ll then be able to get as involved as they like – getting updated information, newsletters, write letters to legislators via our online tool sets, etc.