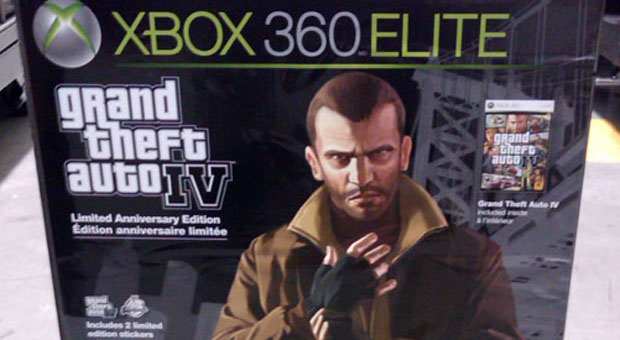 For whatever reason, Microsoft believes saturating the market with bundles will help them win the “console war.” With that in mind, there’s another one on the way, one to mark the one-year anniversary of Grand Theft Auto IV‘s release.

But don’t get too excited just yet, because what’s actually in the box is about as exciting as some rocks and Niko Bellic’s pocket lint. The bundle is packed with an Xbox 360 Elite console, a copy of Grand Theft Auto IV, and two stickers. Yes, stickers — one with the GTA IV logo, the other with the fictional “Liberty City Swingers” logo. And outside of the wires you’ll need to hook the system up, that’s about it.

While they could have sweetened the deal by throwing in a code for the downloadable The Lost and Damned, they went with stickers instead. That’s a good call.

Microsoft has yet to confirm this exciting package, Kotaku has the pictures to prove it. Start saving your money now.